"Love is patient, love is kind ..." That beautiful and most famous passage was written by St. Paul in his First Letter to the Corinthians. Paul, also known as "Saul of Tarsus," was born in this city in the first century AD. He grew up here and later wrote those words in the city of Ephesus, in Western Turkey, where he lived for three years during his many travels spreading the new religion of Christianity. Tarsus, like all of Turkey, is full of such history. It is believed that civilization has been ongoing here for as many as six thousand years. This part of Turkey has been controlled throughout the ages by the Hittites, the Assyrians and Phoenicians, the Persians, and Romans all in the centuries before Christ. The famous Roman orator Cicero once governed Tarsus. Emperor Julius Caesar came to Tarsus in 48 BC and gave various decrees. Thus for a time the city was known as Juliopolis. After the death of Julius Caesar, Mark Anthony, who was in charge of the Eastern territories of the Roman Empire, came to Tarsus to meet Queen Cleopatra of Egypt in 41 BC. The Roman Emperor Hadrian came here in 123 AD. Later it was under the control of the Crusaders and Byzantines before becoming part of the Ottoman Empire in 1517. It was even under control of the French for a short while during Turkey's War of Independence. It was liberated from the French in 1921 to become an important area in modern day Turkey.
History is all around where Christine and I live. Right behind the campus is an excavation site known as the Gözlükule Mound. Finds there date as far back as the Neolithic Period and include discoveries from the Early Bronze Age. I could go on and on about the history here, but you get the idea. I'll share some pictures of these historical places later in this blog. We're of course getting excited for our return home. Our bags are out, and the packing is almost completed. Christine won't be returning with me next year, so she's got a lot to take home. But as excited as she is to get back, she knows she will miss a lot of people here. I'm still amazed at how she jumped right into the mix when she got to Turkey. She has made many friends, American and Turkish, has helped many of her students and the elementary school's students get better at English, and thoroughly enjoyed the culture, food, and opportunity to travel while here.
I'll be missing her while I'm back for one more year starting in August. Hopefully, the time will pass quickly. But before we leave, we wanted to share just a few more "Notes on a Turkish Train Pass" from the 2013 - 2014 school year here:

Turkish coffee is the strongest I've ever tasted. It is so thick, it feels a little like mud to me. But Christine loves it and orders it whenever she gets a chance.

I may as well start smoking. Everywhere it seems, inside or out, people all around us are smoking. And the smoke is constantly in our clothes, our hair, and our noses.

It's really getting hot and humid now. Temperatures in the 90's today and Thursday, and 100 for Friday and Saturday. We can't wait to feel that cool ocean breeze.

We've been saying a lot of goodbyes lately, some forever. International schools have a much higher turnover rate than American schools. Many of the American, Canadian, and British teachers are adventurous and seek new experiences in other places every few years. Just this past week we've said farewell to six people we've lived on campus with and taught with. Really good people, and it hurt a bit to see them go.

Here's a good one. Last week the school had every teacher take a complete physical exam. First was the blood test. When the lady was finished drawing my blood into a syringe, I was surprised to see her hand it to a young guy sitting at a desk next to us. He took the blood filled syringe and started squirting my blood into a vial, but seemed to have trouble with it. Then he spilled the blood from the vial all over his bare hands and the papers in front of him - the lists of all the teachers, their signatures, etc. I watched him then grabbing wads of cotton from a big sheet of it next to him and trying to wipe my blood from his hands and the papers. Blood was all over the place, so he grabbed more cotton quite a few times, dripping my blood onto the big sheet of it. This was gruesome enough to watch, but then the other lady who was drawing blood from people at the little station next to me started taking cotton from the same sheet. There was quite a bit of my blood on that big sheet of cotton, so she was trying to grab wads that were not bloody. But I think she did end up with a few blood drips on pieces she used on other people. Then another lady came up and explained to me in Turkish that they needed to draw my blood again. Obviously. So she took my other arm and stuck a needle into a vein. But it was not the main vein in the middle of the arm, it was a slightly smaller one off to the side a bit. That stung. Then she gave me a little piece of cotton to press on the wound while she went for a band aid. Well, I wasn't surprised when she put the band aid on the main vein in the arm, not the one she had just drawn blood from. I walked away and switched the band aid to the vein that been assaulted. And the guy at the table still had my dry blood stains all over his bare hands as he worked.

Some recent pictures for you: 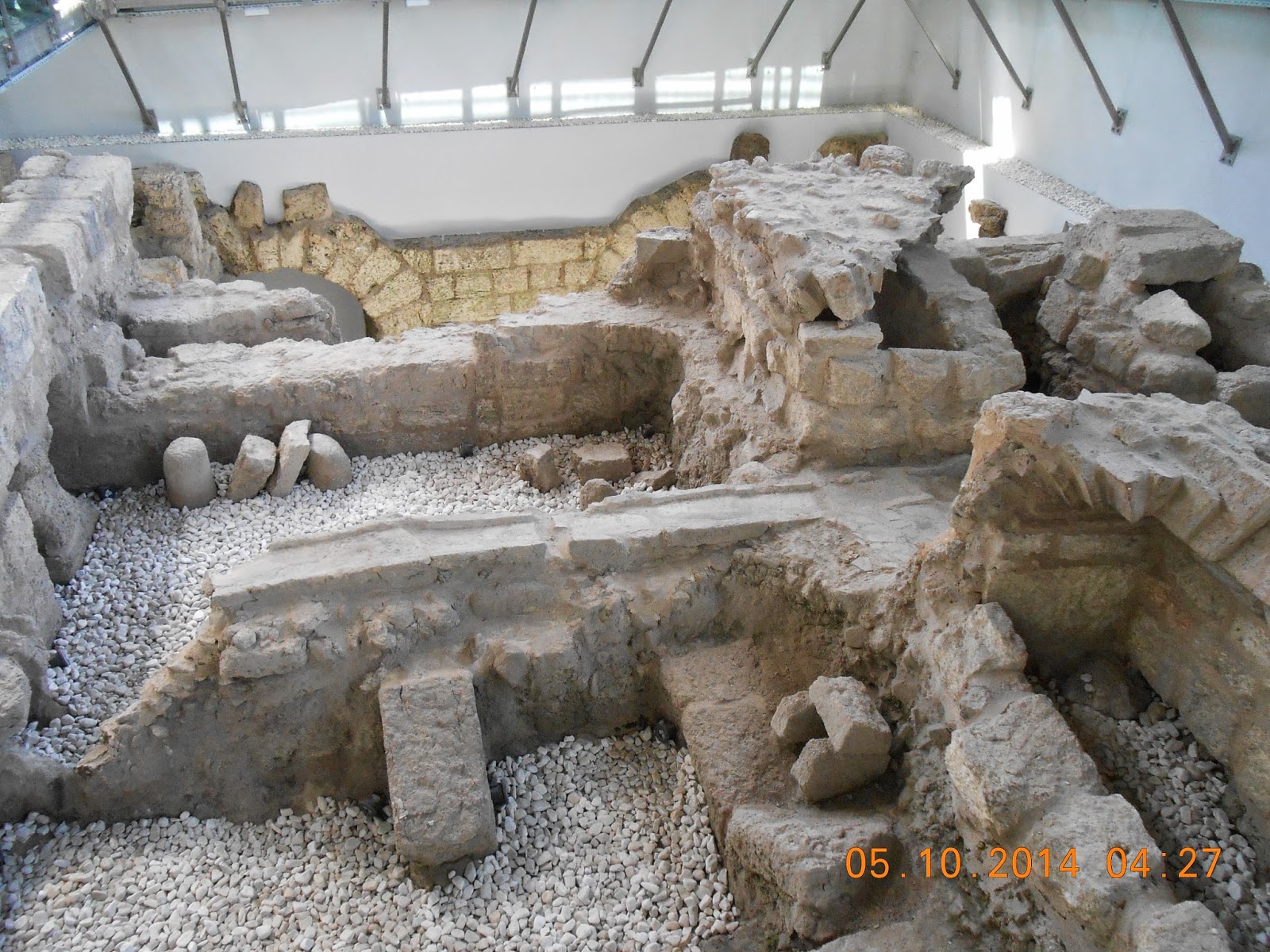 Excavation site in Tarsus where it is believed the prophet Daniel is buried. 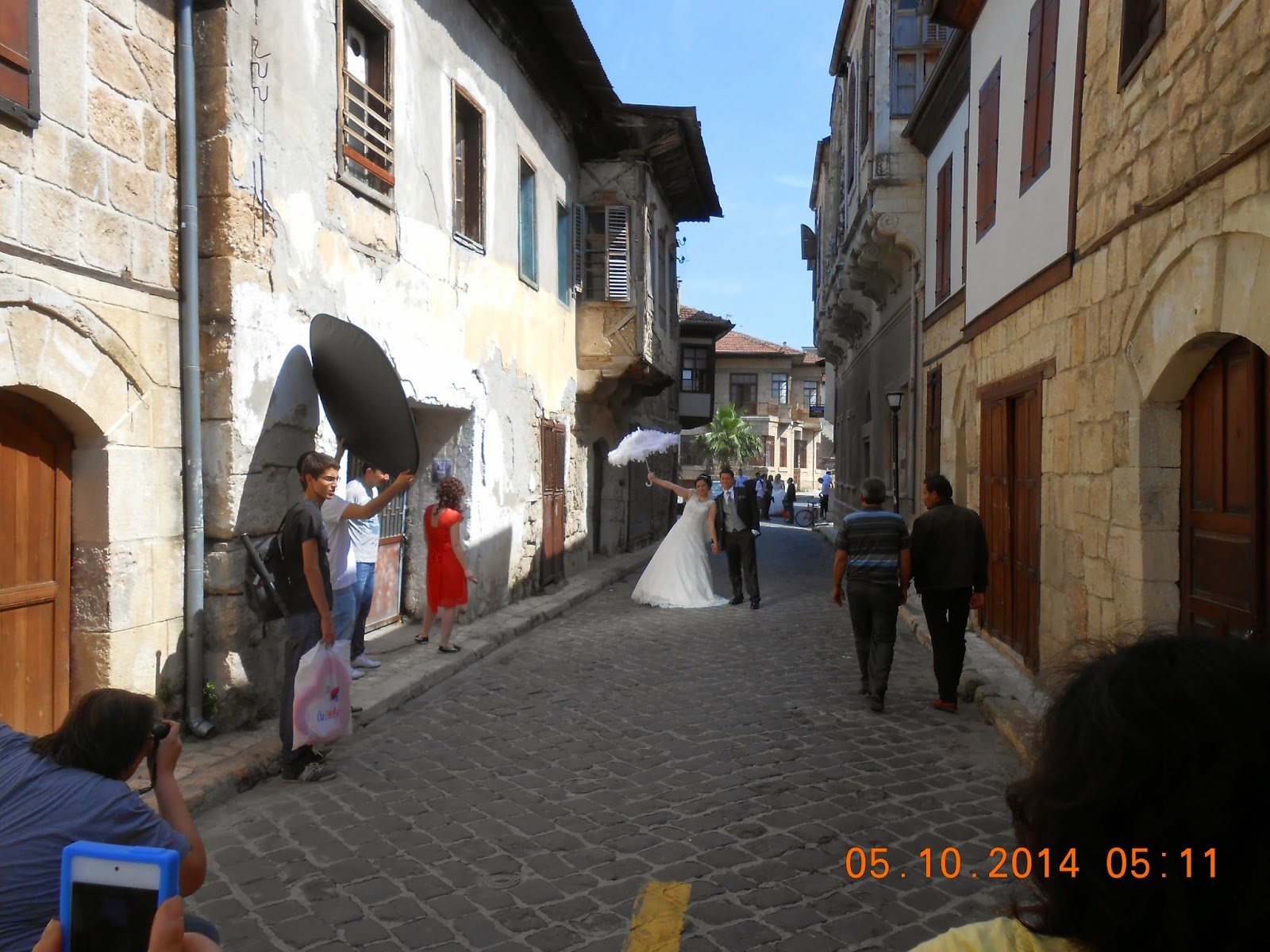 A side street in the oldest part of town. Many wedding couples come to take photos here because it is
so charming! 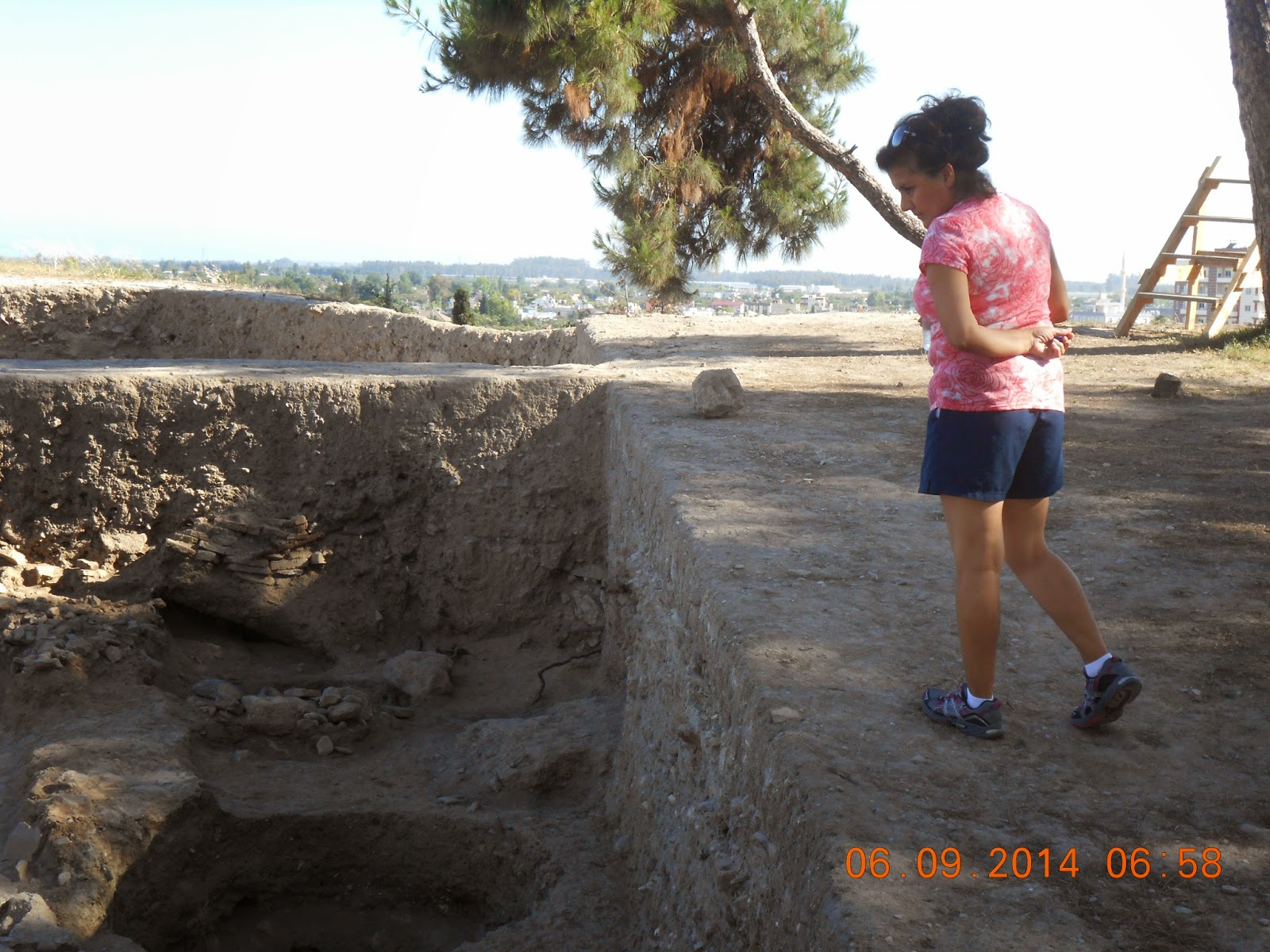 Gözlüküle Mound where archaelogists are still digging and discovering, right behind the school. 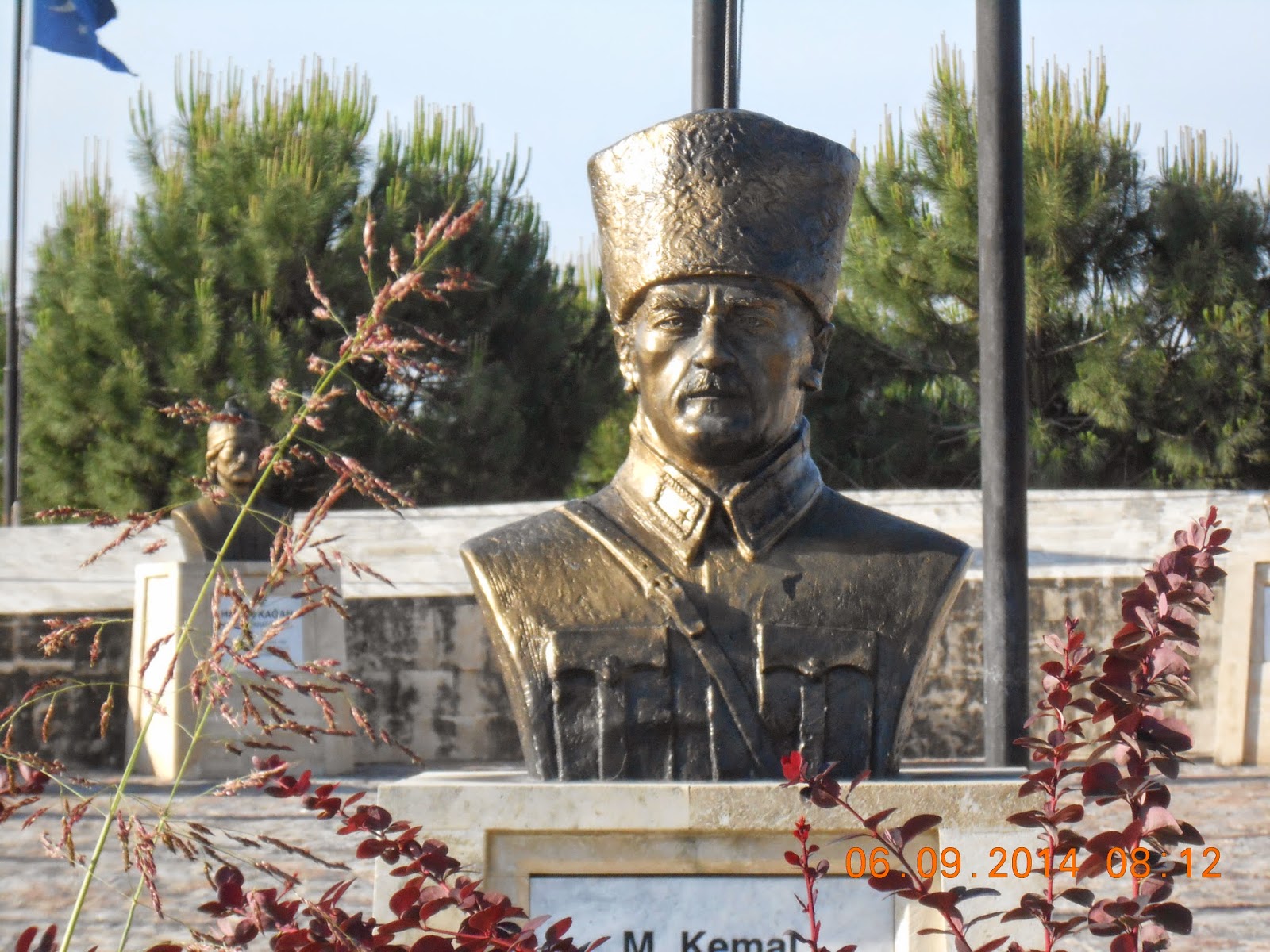 Another bust of Atatürk. You see such memorials to him everywhere you go in Turkey. 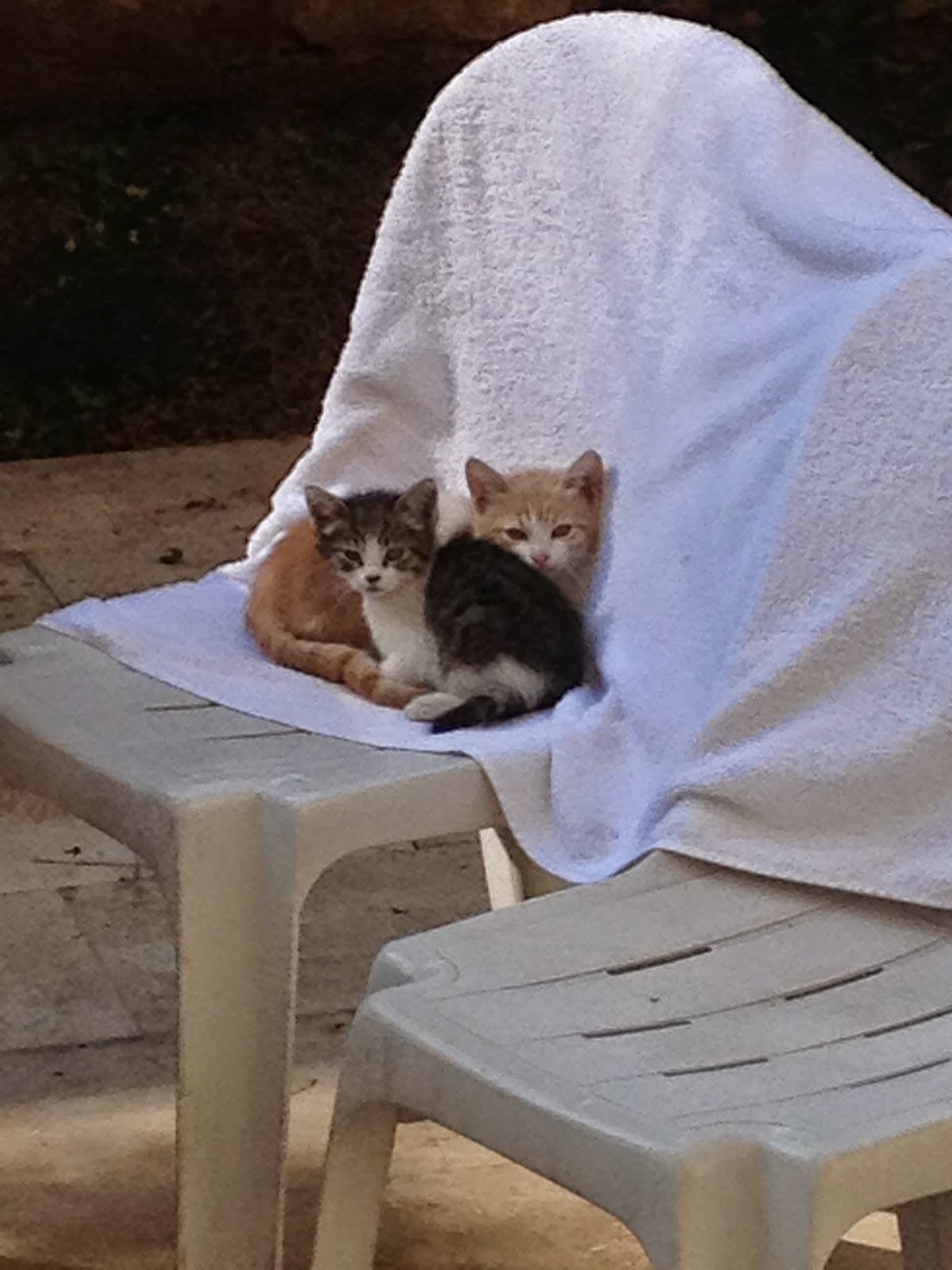 Our two little kittens that just started hanging out in the back yard, "Jesse" and "Mr. White." 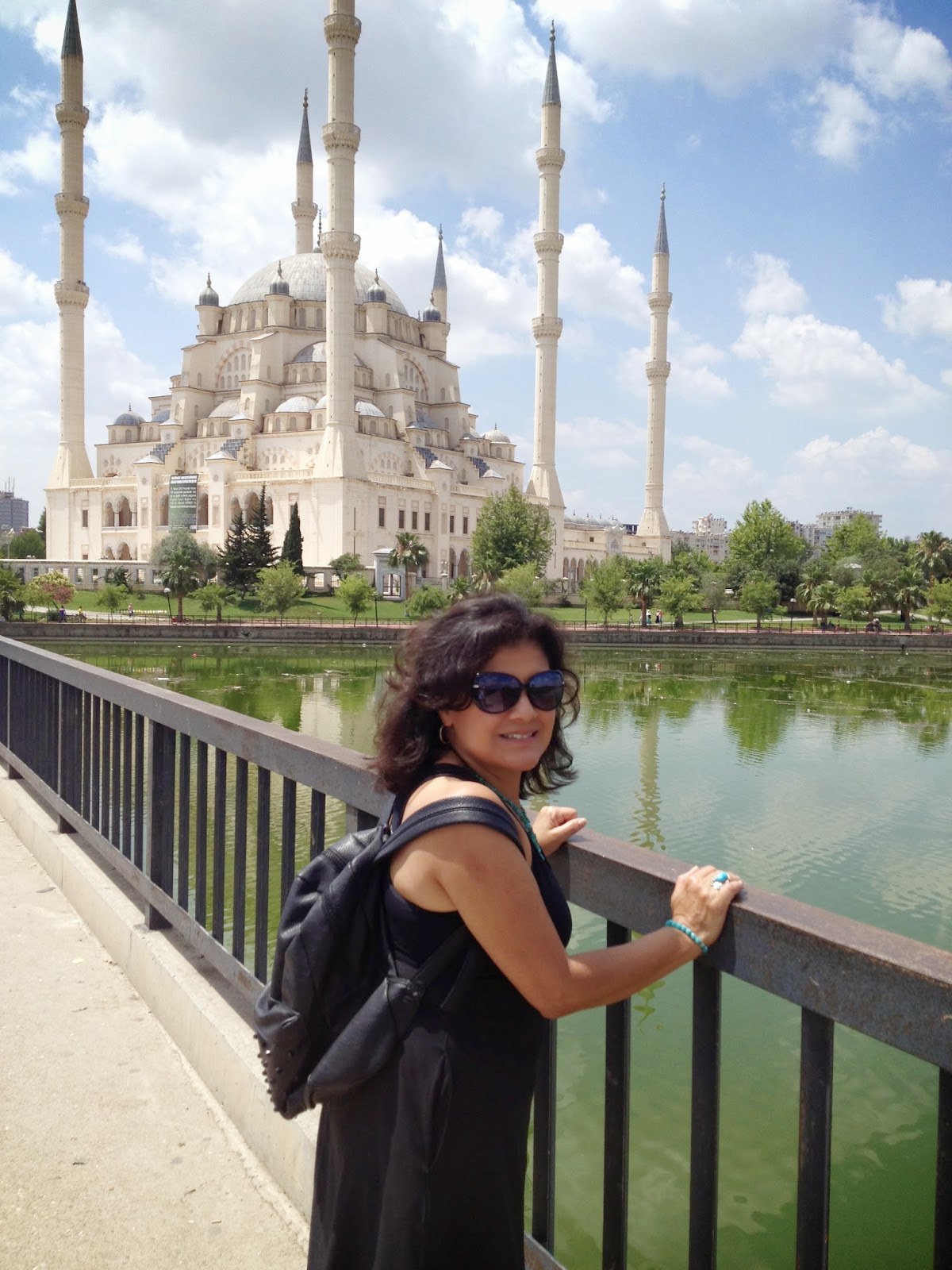 The city of Adana. In the background is the Sebanci Merkezi, the second largest mosque in the world. 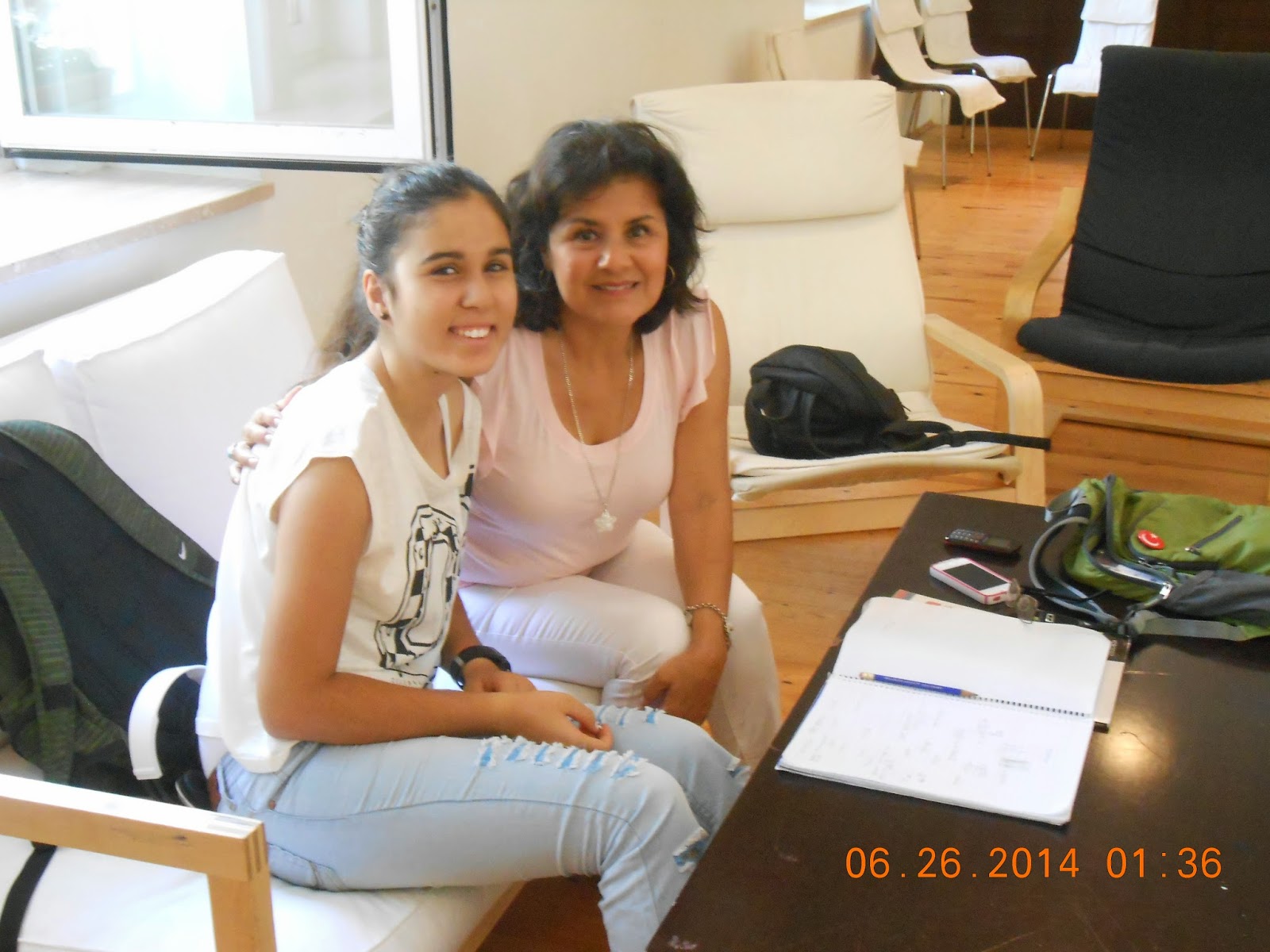 Christine tutoring Gorkum. We love her and hope to have her visit us in the USA someday. 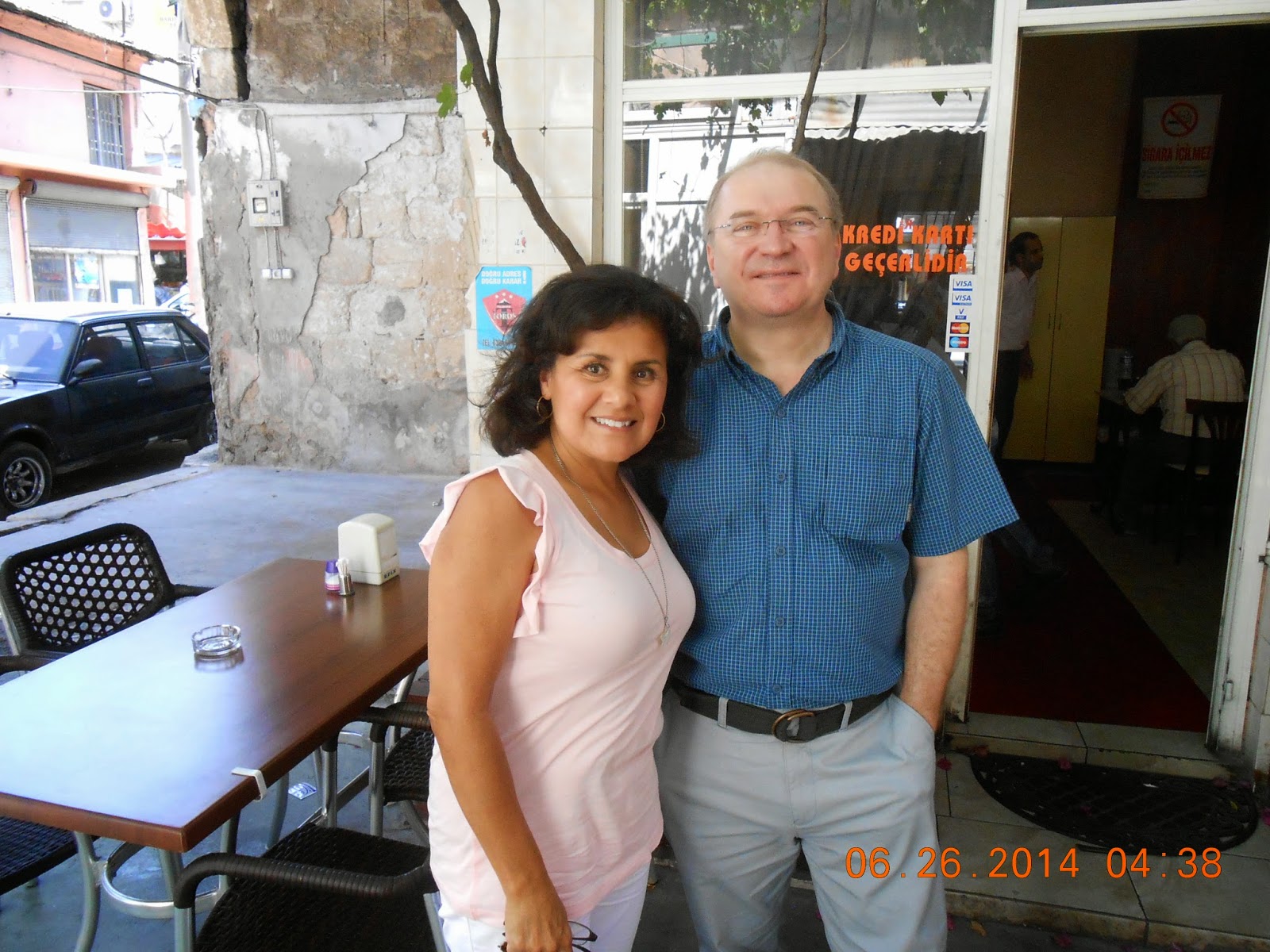 Christine with her student Fuat. He is on the Tarsus city council and a graduate of our school, TAC. 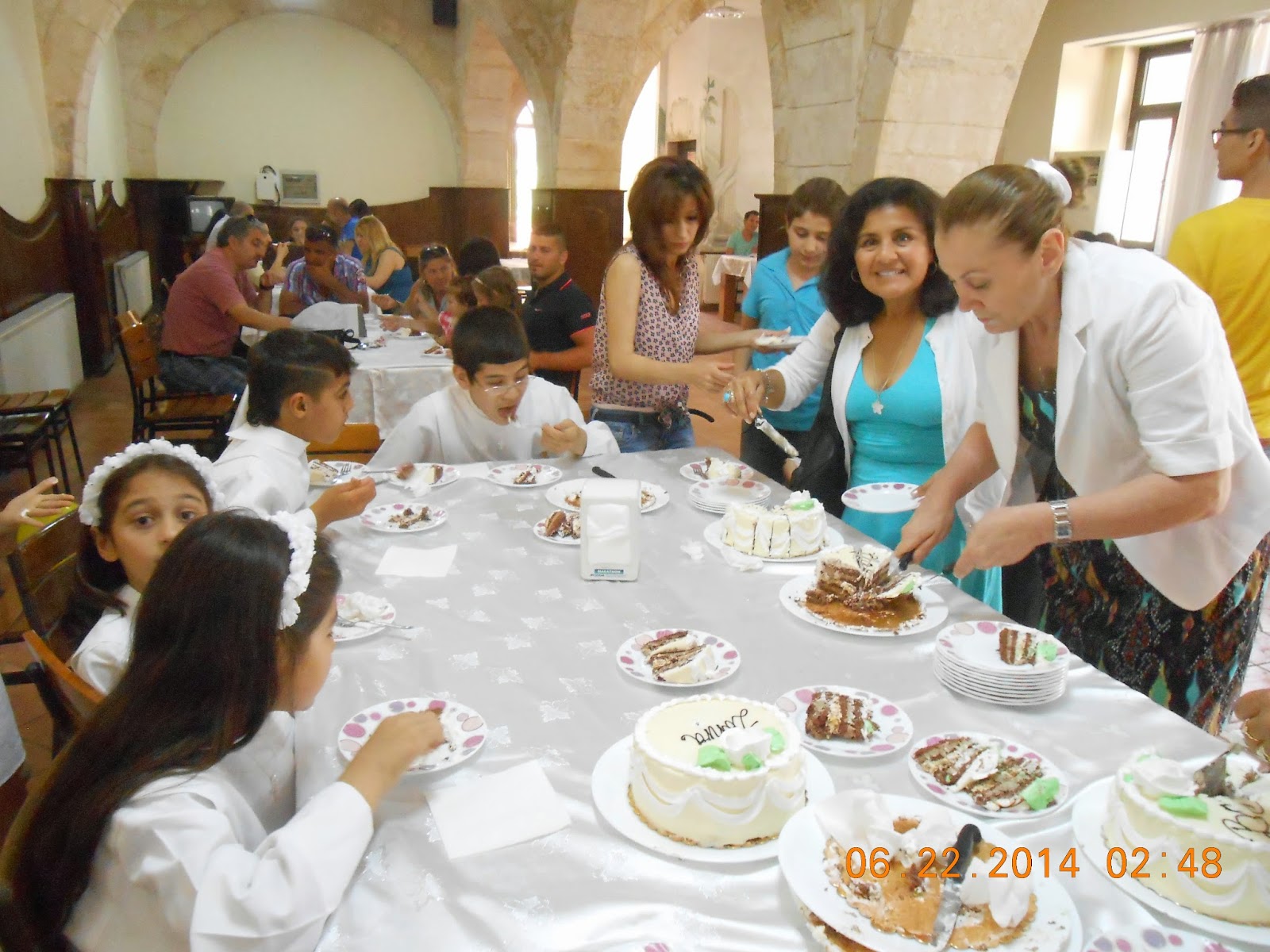 You know she loved this! Serving cake after the kiddies made their First Holy Communion.

We're in our final day in Turkey now, packing and saying a few more last minute goodbyes.We
thought we'd just close this blog for now with a "Top 10 List" of things we most enjoyed here:

10. Our fantastic trip to Istanbul, seeing sites, learning about Turkish culture and history, and
culminating with that unforgettable dinner cruise up the Bosphorus Strait.
9. The food! We've learned to love the simple, tasty foods that this culture is famous for
like kebap, tantuni, and dolma. And the olives, yogurt, humus, and endless fresh veggies
that go with every meal throughout the day and night.
8. Tuesday night at the movies. Foreign and independent films we would probably never
see anywhere else, shown on the back wall of the tiny Sanatevi Restaurant in the oldest
part of town. We had such memorable nights with our Turkish friends and colleagues
from school.
7. Our trip to Ephesus. We walked through the ruins of this three thousand year old city
that was inhabited by so many important names in history like Saint Paul and Antony and
Cleopatra to name a few. Just a couple of kilometers away we visited the house where
legends say that Mary lived the last few years of her life and was cared for by Saint John.
6. Cappadocia! That beautiful and mysterious looking region with its famous cave houses,
churches, and cities.
5. Christine's tutoring and volunteer teaching at the elementary school. She had so much fun
with the adults she tutored and children she worked with. Unforgettable memories.
4. My field day to Antalya with the students and teachers from the prep grade. High ropes
and white water river rafting. I'd never done either before.
3. Walking! Believe it or not, we've grown to really love walking everywhere we go. We see
so many interesting things and get to meet local people. We sure wouldn't have that chance
zooming by in a car. Great exercise too.
2. Our little Catholic church in Mersin. It is such a beautiful and soothing place to be. And we
met lifelong friends from not only Turkey but Syria, Africa, and England too.
1. Spending so much time together, just the two of us. We've been married 32 years as of
yesterday, and in all those years we never had so much time to be together - walk, explore,
talk, travel, and find so much beauty and become closer and more in love than ever!

Ok, we need to go for now. We can't wait to get home and see family, especially our two little grandsons (toruns)! But you'll be hearing from us soon. Take good care.
Mike and Christine 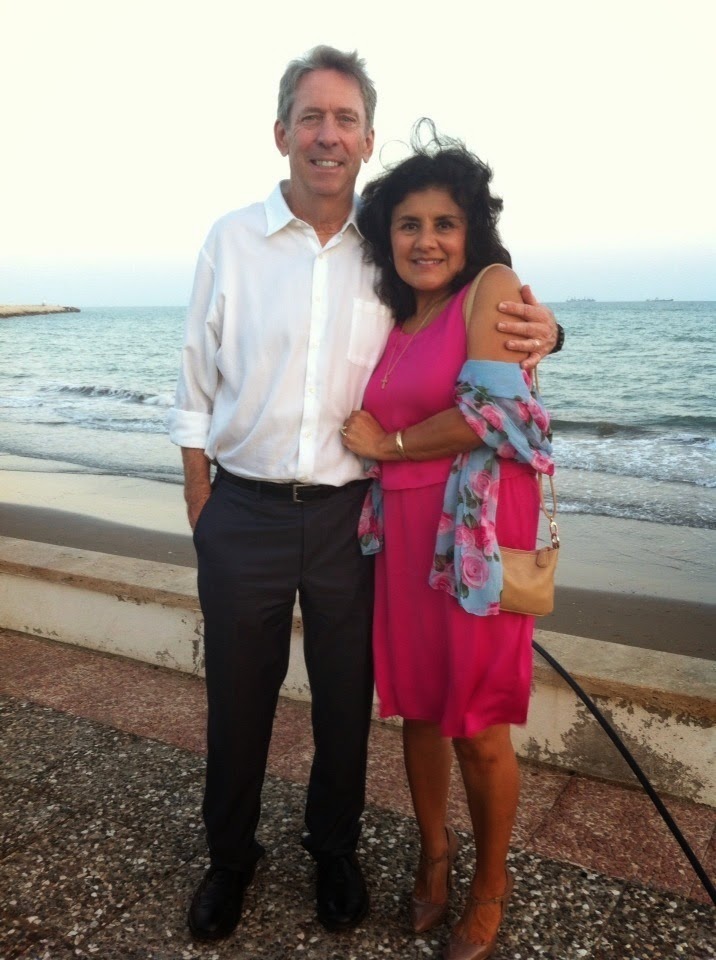