Notes on a Turkish Train Pass #6 - Heading for Home

It's Monday, 19 May 2014. Here in Turkey, the weather is getting warmer, the birds are chirping, new kittens are everywhere, and Christine and I are thinking of all of you. It will be like magic to step off that plane and see "the curvaceous slopes of California" again. We've had some good times lately. We spent a week in Munich, Germany last month. Then three days in the beautiful and mysterious Cappadocia region of central Turkey. And I even spent two days on a field trip to the mountains of western Turkey with our prep students and teachers where we hiked, did some high ropes climbing, and went on a 14 kilometer white water river ride. Real white water. And cold too. I'd never done that before. But as I sit here now, it's a little hard this morning not to also think about the serious troubles of this nation. Turkey is a country filled with tension. Within itself. There is great anomosity between many people I know and their government over the government's increasing religious conservatism and desire to have a Turkey more like the old Ottoman Empire. The more modern, more educated people here want a Turkey that is like the American and European models that their hero, former prime minister Mustafa Kemal Atatürk, envisioned and started to build after Turkey won its independence in the 1920's. It is along this religious versus secular divide that Turkey is in conflict. You might remember the demonstrations and violence here last summer over the issue of Gezi Park in Istanbul. That tension also erupted in many other parts of Turkey. And it has been seen again surrounding the nationwide municipal elections last March and the latest event I'm sure you've all been hearing about - the tragic coal mine accident in Soma, Turkey, this past week where more than 300 miners have died. It is the worst industrial disaster in Turkey's history. That event has rekindled much anger throughout the country. I've heard rumblings even here in quiet Tarsus as I wander the streets.

Don't worry about us or our safety. People here are wonderful to us as always, and we feel comfortable wherever we go. More than anything else, we feel fortunate to have had this chance to travel and experience this part of the world. And it really has felt good to stand in a classroom and be with students again. But before I start rambling again, here we go. Let's just share some more notes on the old "Turkish Train Pass."

In our thoughts so much laely. Here are some photos that typify the recent turmoil in Turkey. 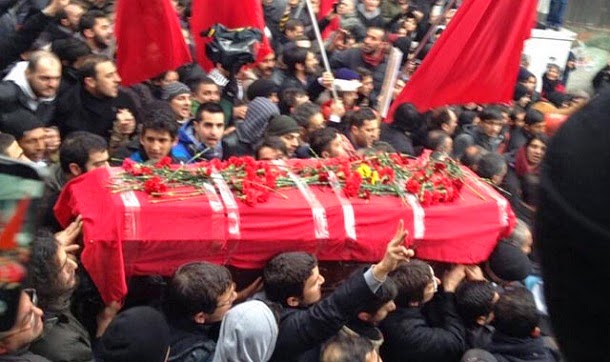 Berkin Elvan was a 14 year old boy who was hit in the head by a police tear gas cannister when he went to buy a loaf of bread for his mother last summer during the Gezi Park riots. His death last February after months in a coma ignited demonstrations all over Turkey. 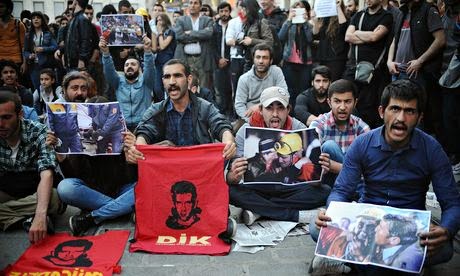 Protests over this past week's mine disaster in Soma. 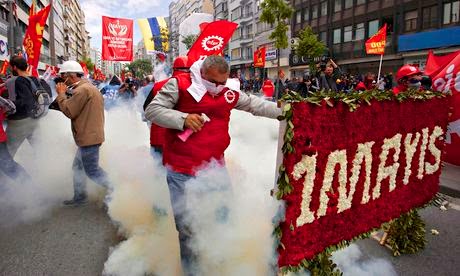 May Day in Istanbul. The government wanted to stop workers from marching to the city's Taksim Square where many anti-government gatherings take place. 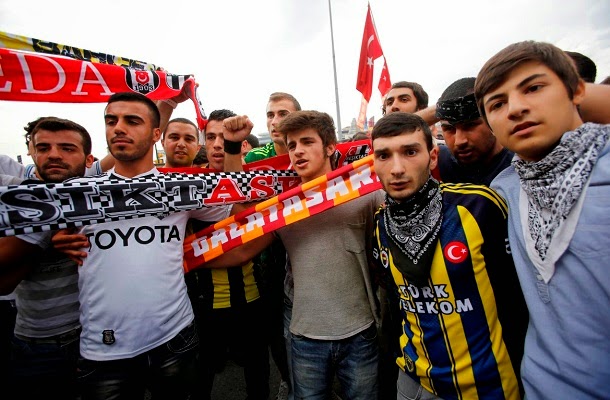 Turkey is futbol (soccer) crazy, and its three biggest and best teams, Beşiktaş, Galatasaray, and Fenerbaçe are the bitterest of enemies. But some fans of each team posed together in opposition to the government at a recent rally.


The Munich trip was great for us. The last time I saw that beautiful city was the summer of '74 with Bill and Pete, so soon after I arrived this time, I drank a liter in their honor down at the old Hafbrauhaus. Munich was rainy and chilly in April, but Christine and I had no problem with that. We went to many of the famous places and even took a train ride down to Salzburg, Austria on a wintry day. I couldn't stop singing, "The hills are alive with the Sound of Music" and "I am sixteen, going on seventeen" for weeks afterward. 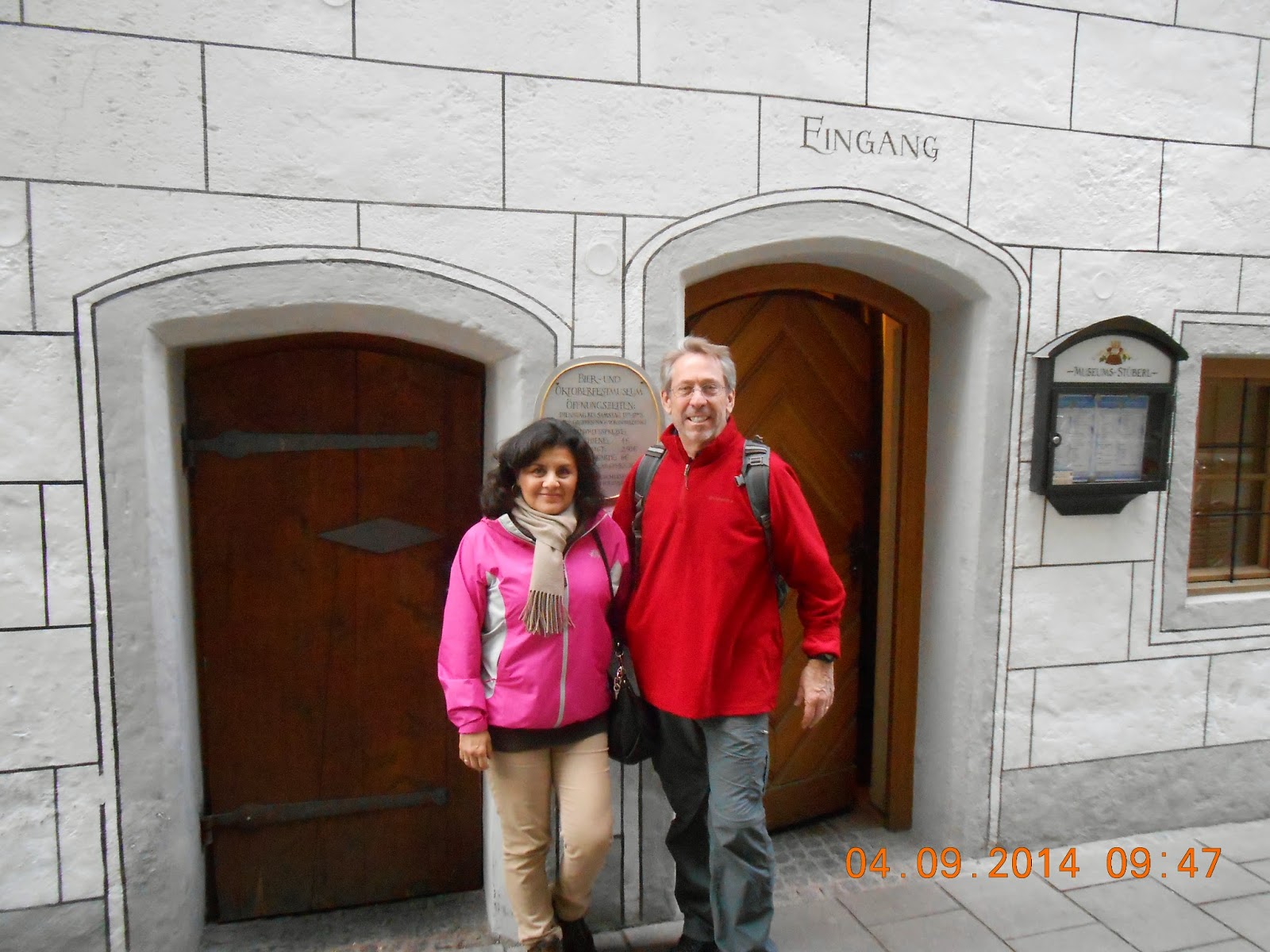 Roaming the back streets in the old part of Munich. 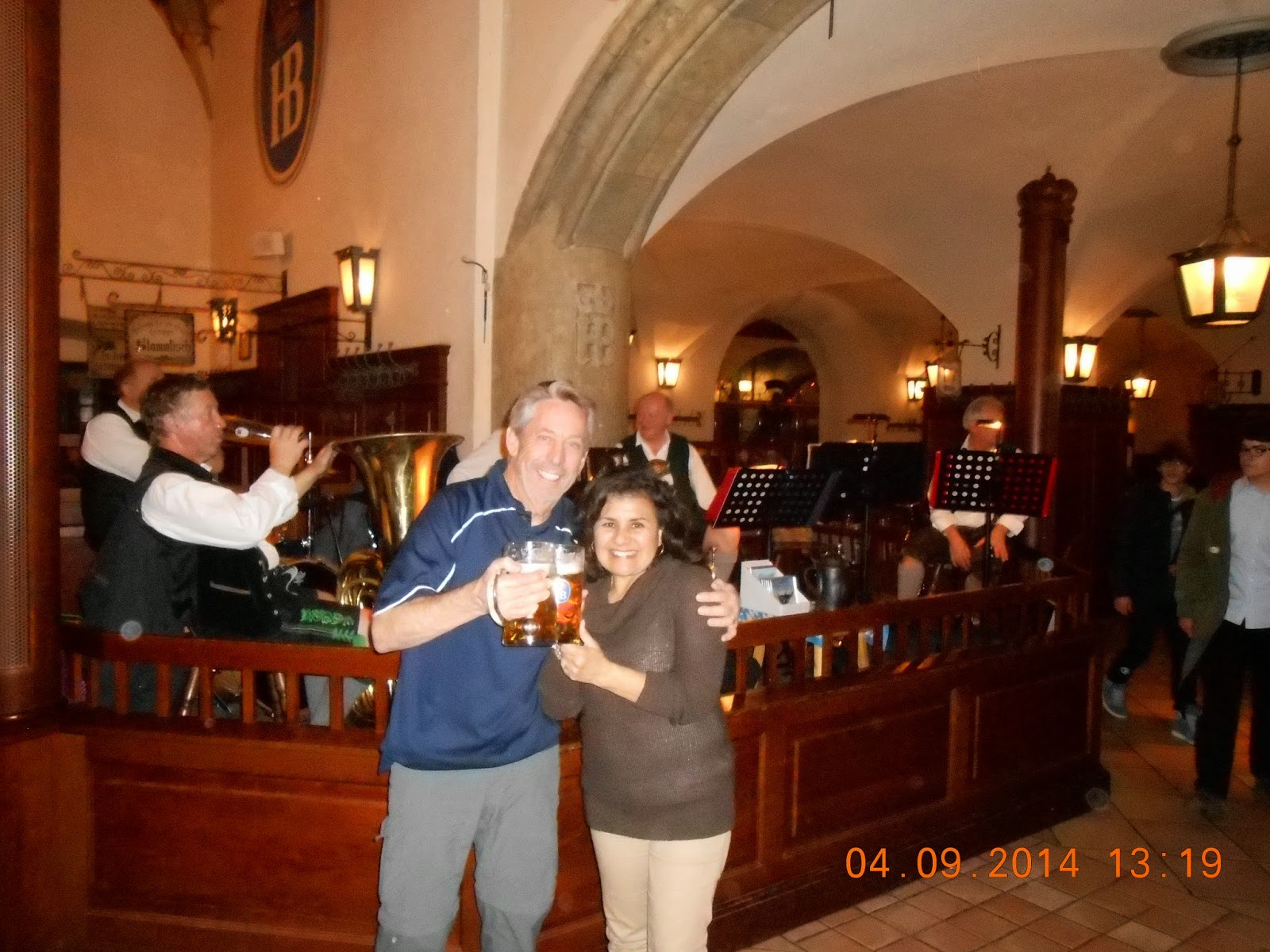 Prost! from the Hofbrauhaus! 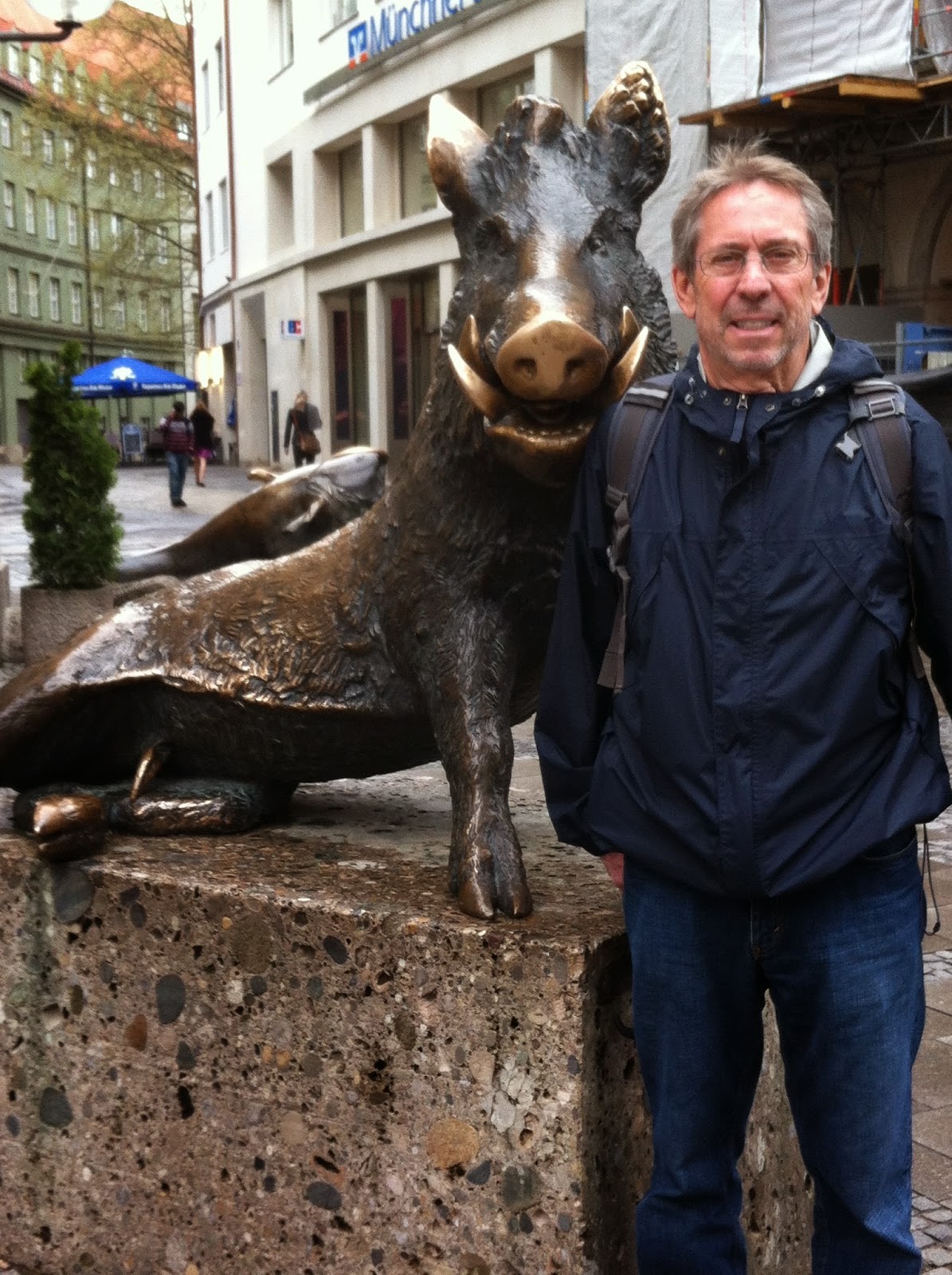 With a famous wild boar statue in Marienplatz. And no smart ass remarks, please. Obviously I'm the one on the right. 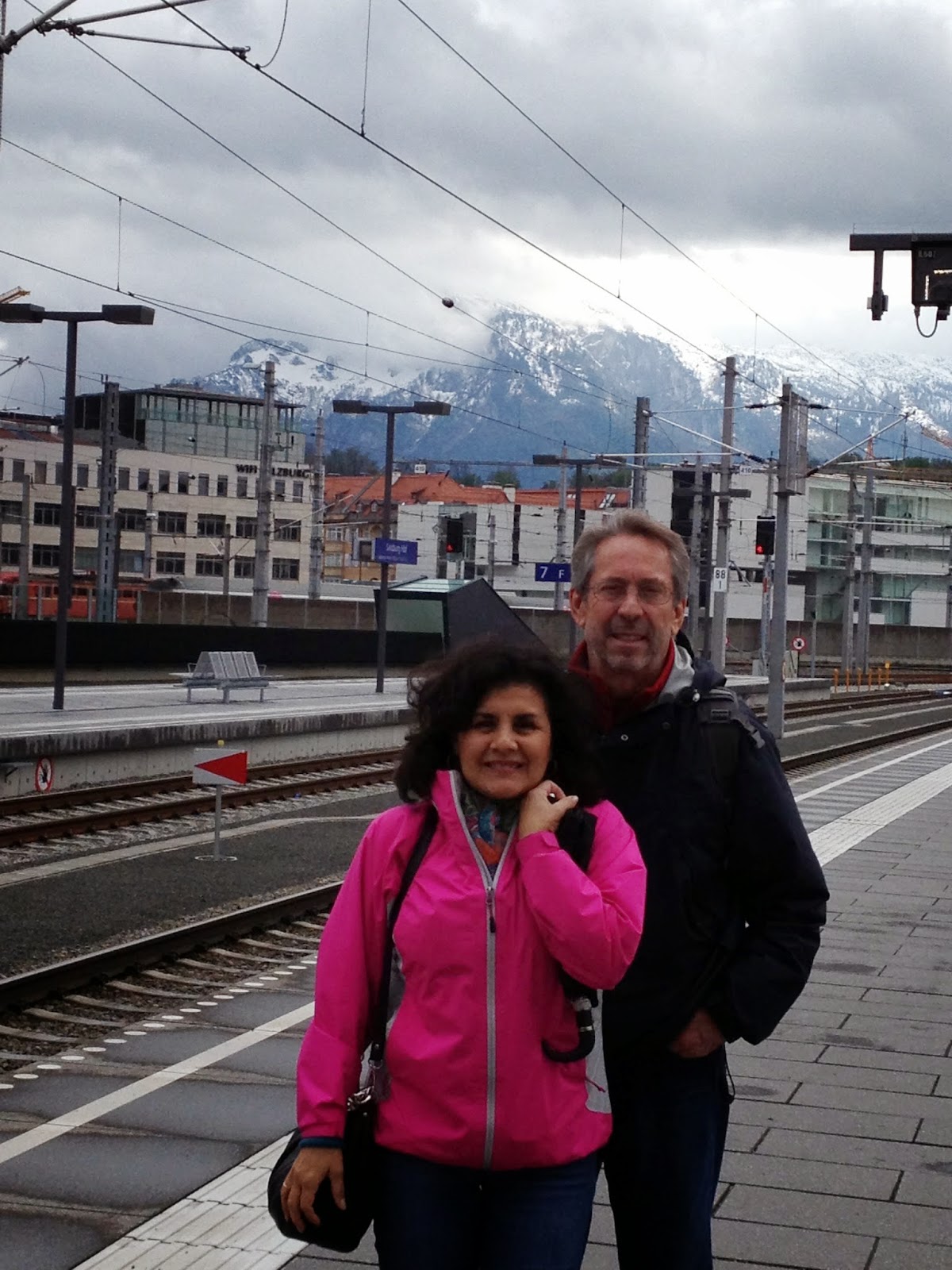 One of the highlights was seeing the Munich Philharmonic perform Strauss music in the Munich Concert Hall. One of the most moving experiences of our lives was visiting the Dachau Nazi Concentration Camp just a short train ride from the city. 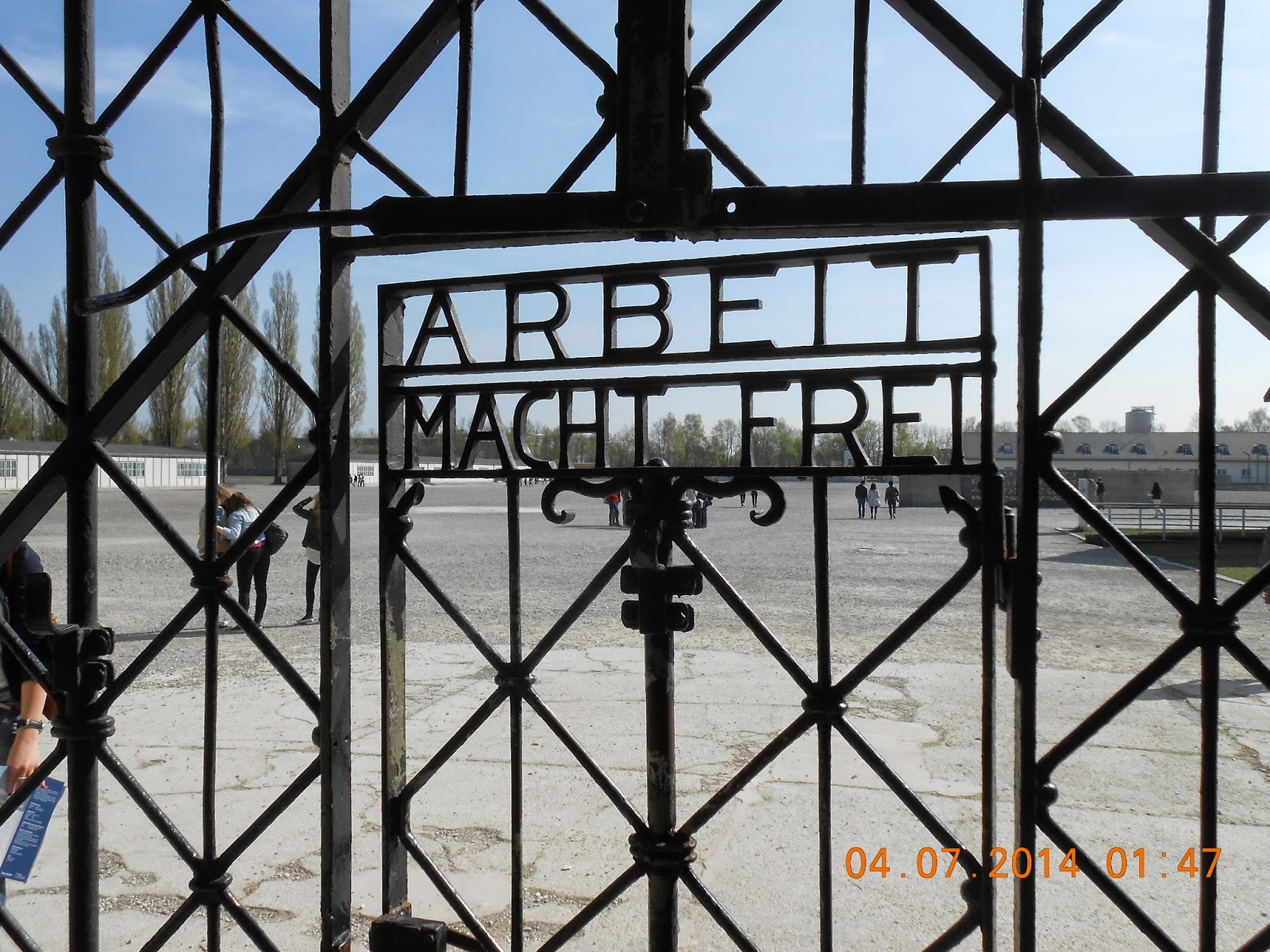 Entrance to Dachau and the infamous words that greeted each victim, "Work will set you free." 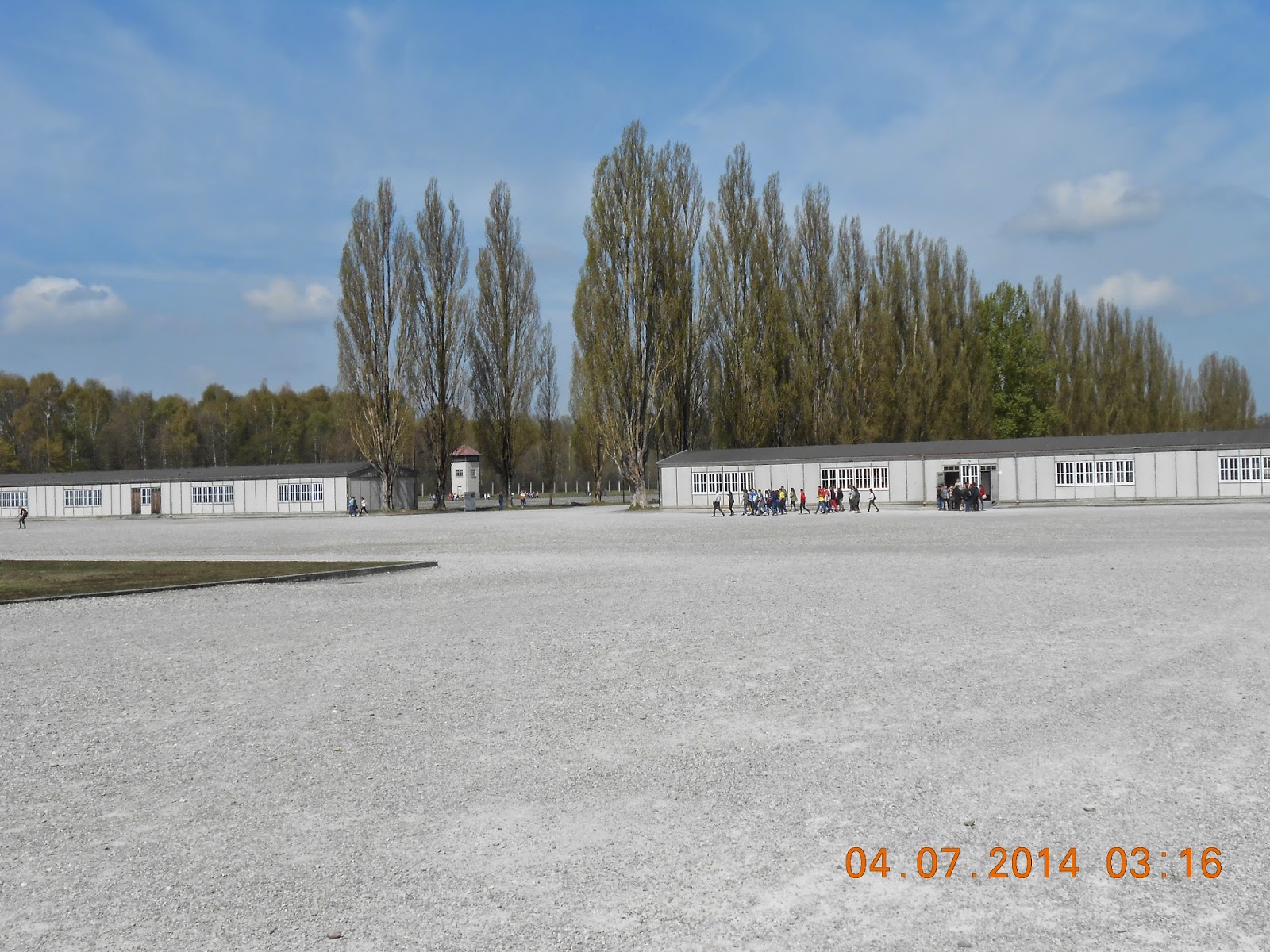 The main yard of Dachau where so much insanity and murder took place. 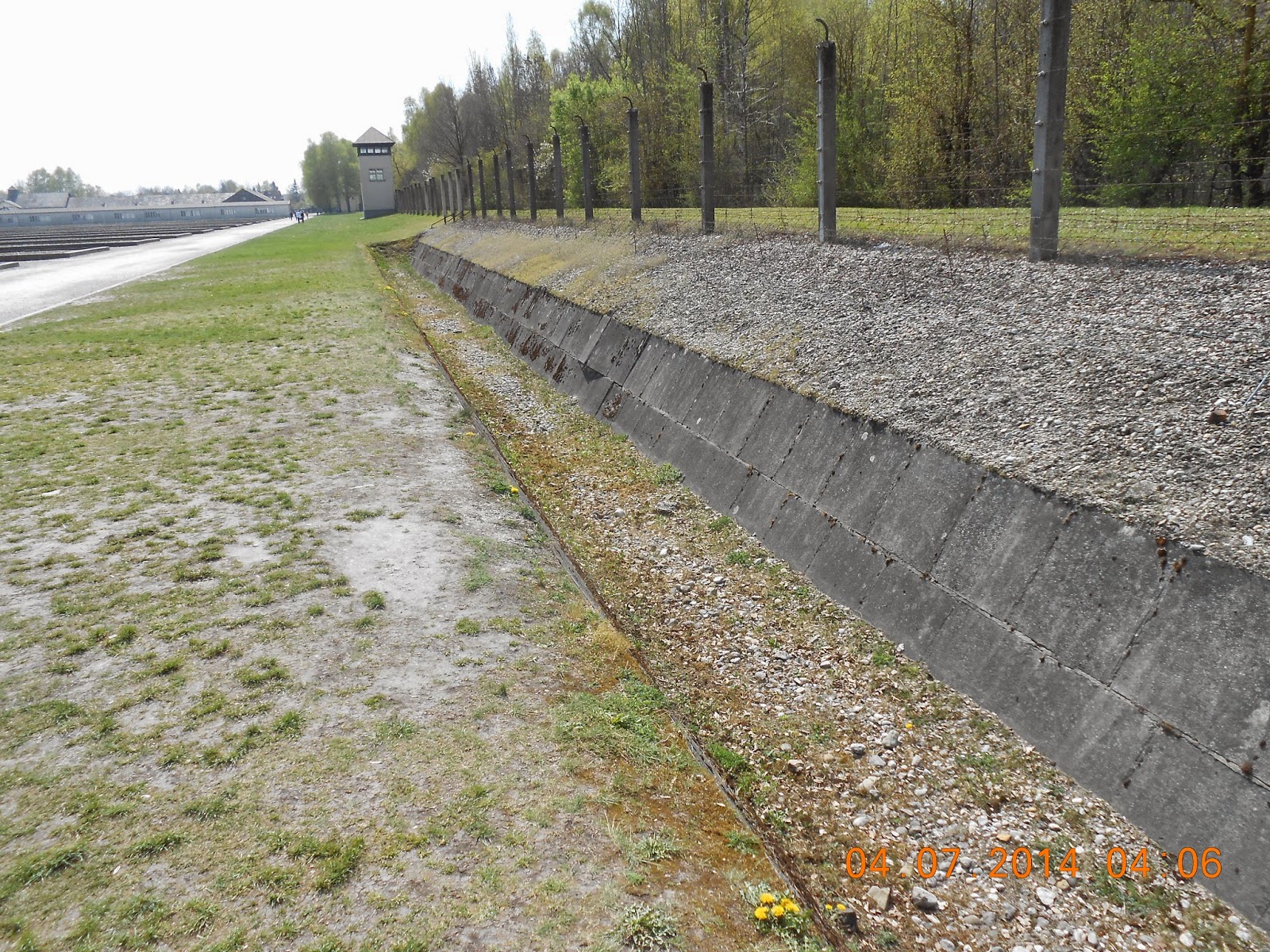 If prisoners entered any ditch near the fences, they were immediately shot by tower guards. Some of them ran into the ditch intentionally to be gunned down and end their suffering. 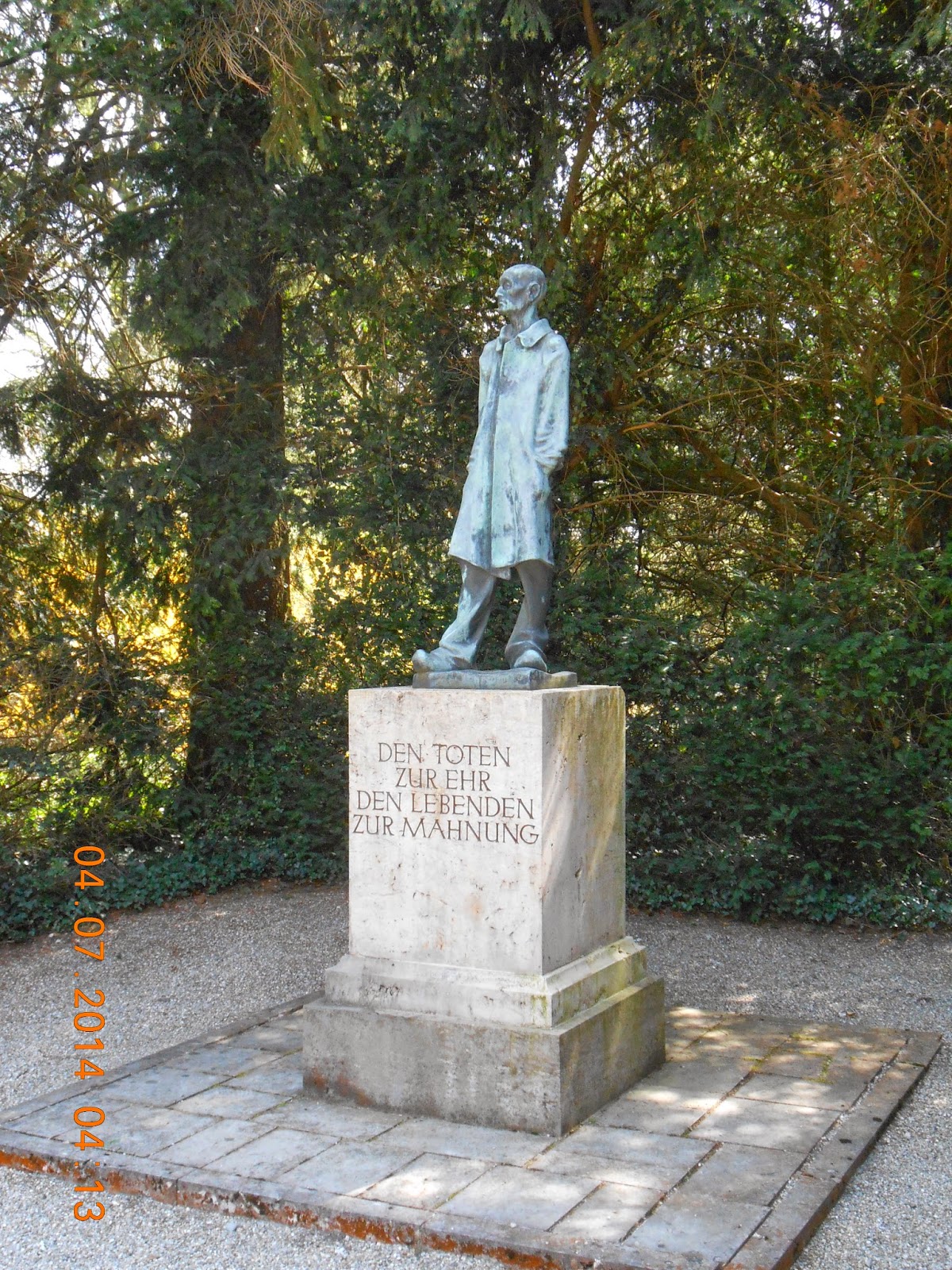 One of the many memorials to all those who died there.


After becoming professional daredevil pedestrians like everyone else here in Turkey, crossing the streets in Germany felt strange to us. The first time we stopped on a corner, I couldn't understand why no one was crossing. So what if the light was red, there was not a car even close to us! I could hardly hold myself back and asked Christine, "What's wrong with everybody?"

It is an everyday experience here in Turkey to have shop owners tell us we don't have to pay right away for items. If we don't have enough cash in our pockets, they often tell us to just take what we need and pay later.

You don't really need a prescription to buy medication at a pharmacy. You can just show the old bottle of whatever it is, even if it's from the states, and they'll sell more to you. Very cheaply.

It's ok to pick fruit from trees in public parks and streets. The other day we saw an old guy shaking the hell out of an orange tree on a street in Adana and scooping up the oranges that fell. And a lot of vendors are selling fruit along the streets. Maybe that's where some of them get the fruit.

People who run restaurants and stores usually get real excited when an American comes in. It's pretty rare. They can't do enough to welcome you, shake hands, learn your name, and maybe even practice a little English if they know some. A while back, I walked into a local cafe, and the cook was so happy, he came out to introduce himseşf and greet me. Then he pointed to the nearest table and chair and said, "Please, stand up!"

Cappadocia is the name of a beautiful rural region in the heart of Turkey, famous for its otherworldly formations caused by volcanic eruptions, rain, and wind over centuries. And the many ancient cave homes, cave churches, and underground cities. The land of troglodites. We really enjoyed our stay there. 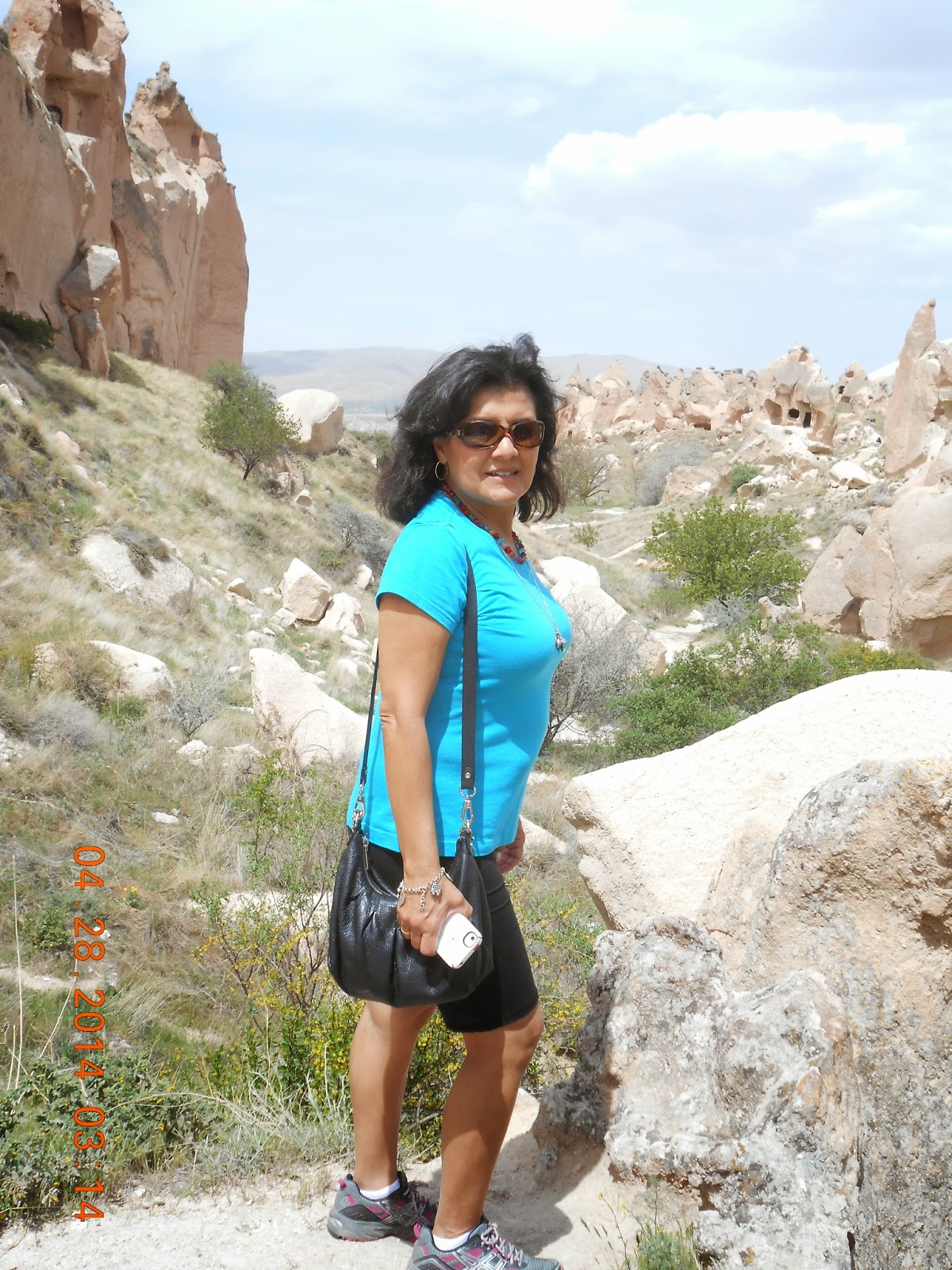 Christine at the Open Air Museum in Zelve. 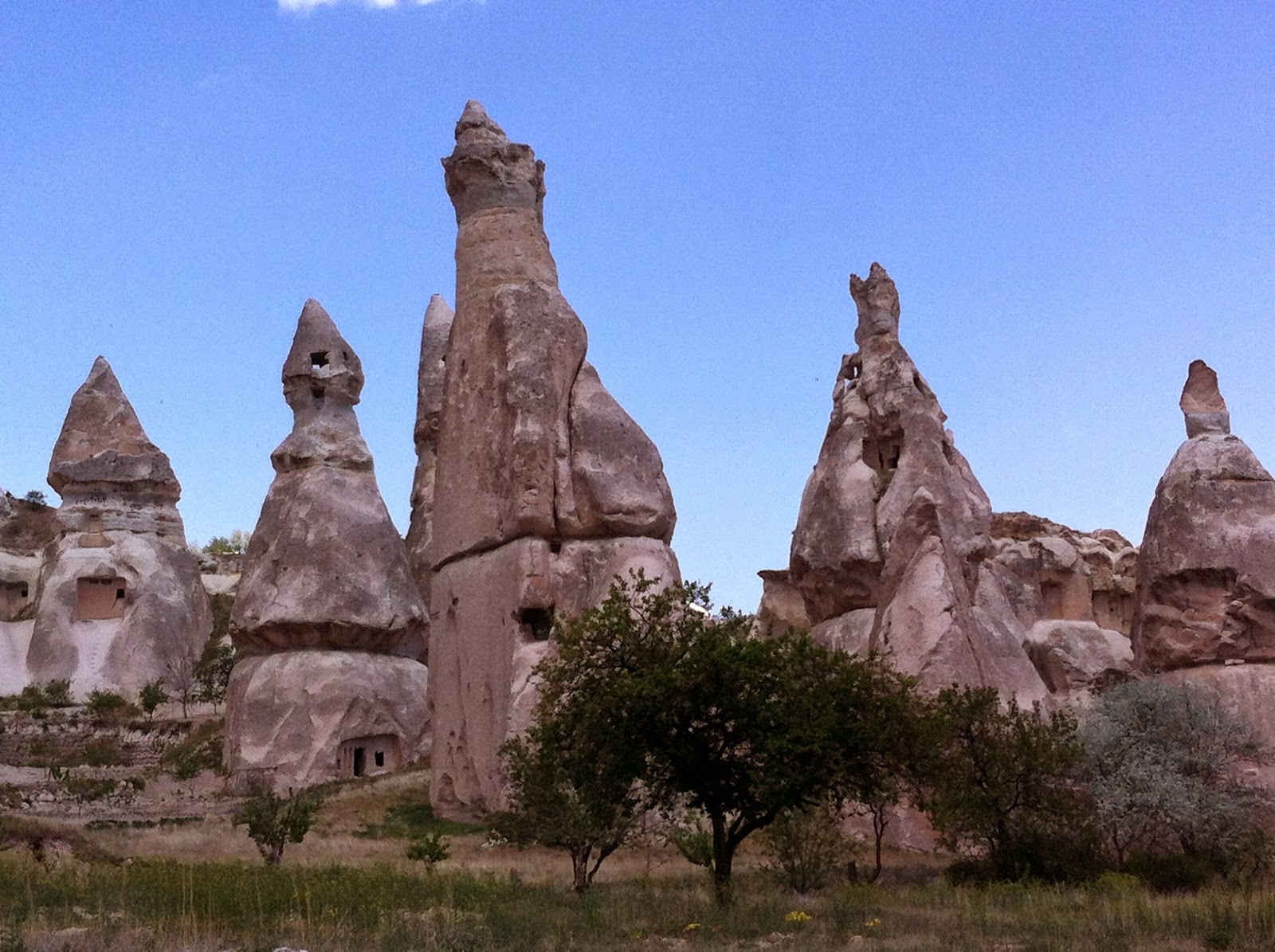 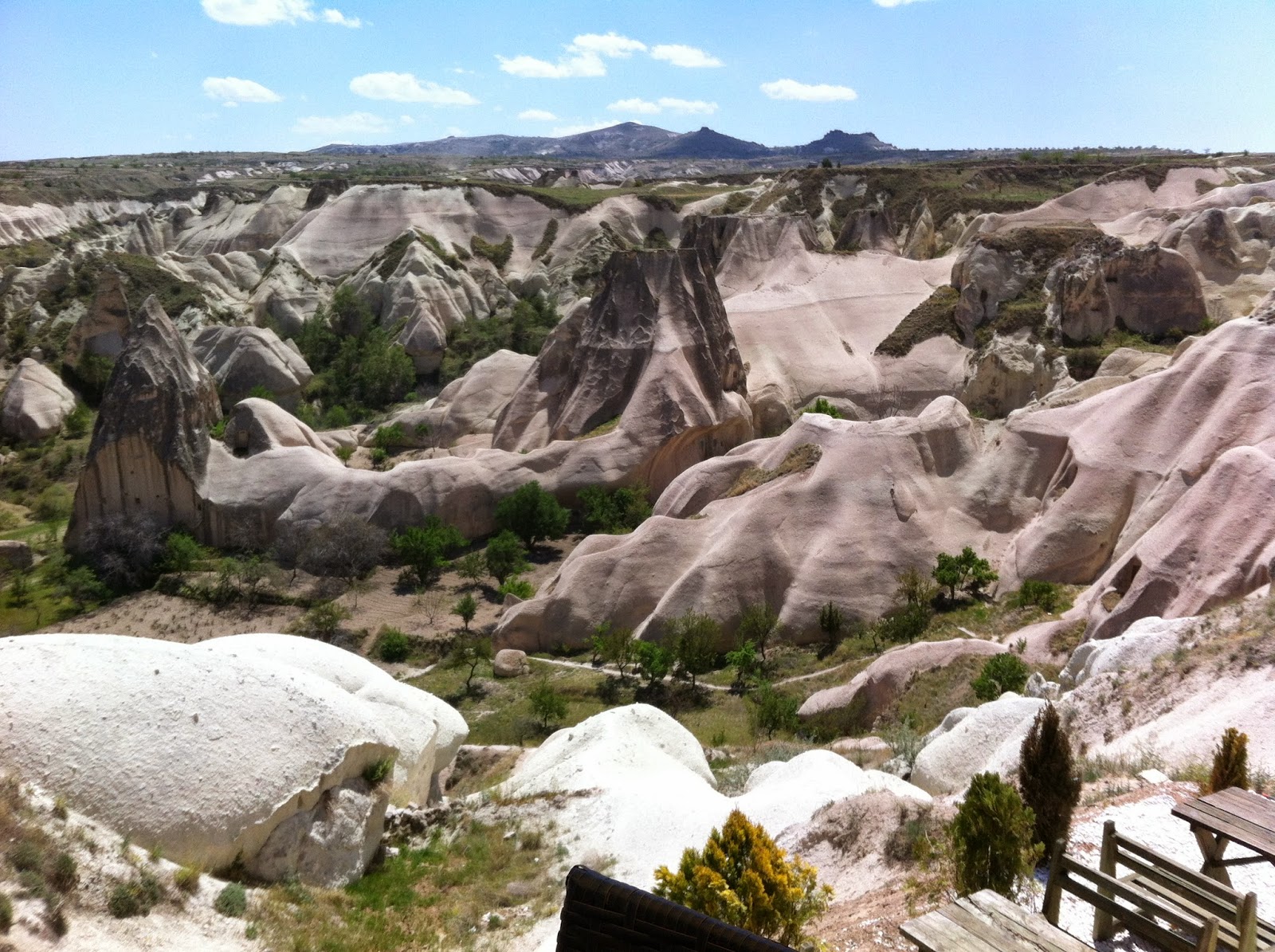 As I said before, people here immediately know with one look that I'm not Turkish. The other day I was walking down the street and a kid about twelve ran up to me and yelled "Hello, England!"

People immediately know that Christine is Turkish. Everywhere we go, folks speak Turkish to her with confidence, and they are so amazed when we try to explain that she's an American and can't speak Turkish. "Pardon, Turkçe bilmiyorum," we say.

Here are some shots of people picking fruit from public trees. 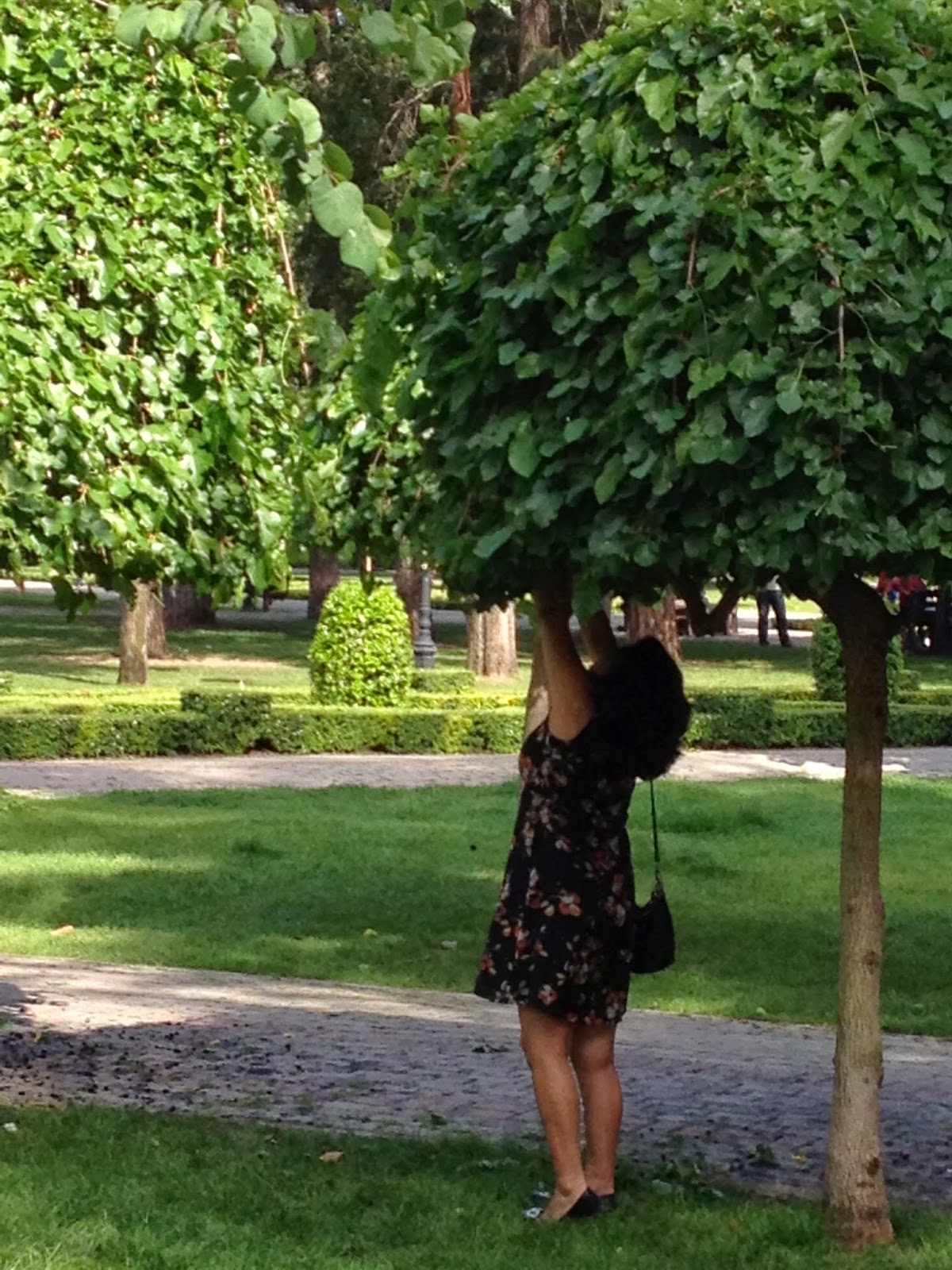 This lady was grabbing some kind of berries from a tree in Adana. 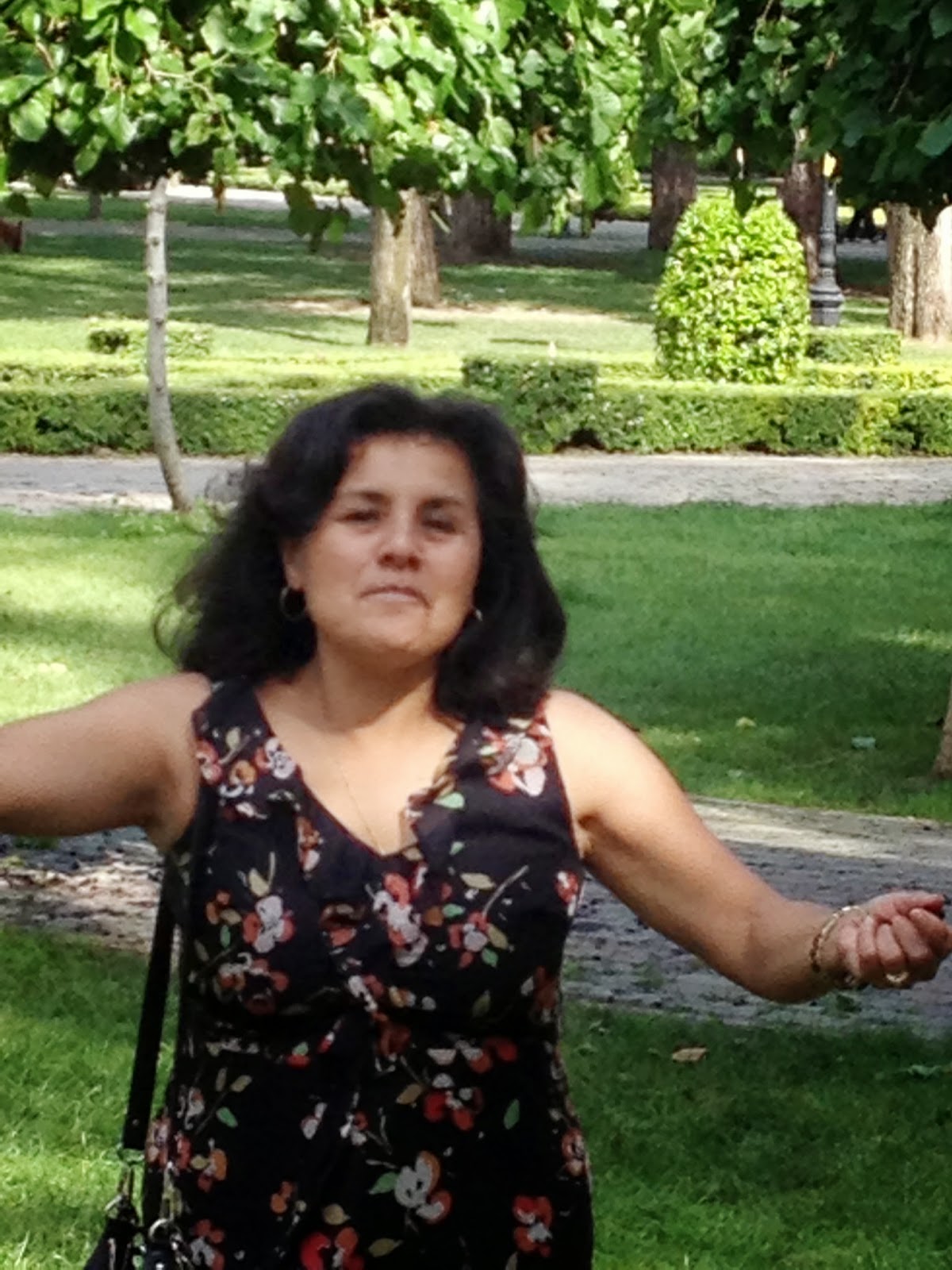 She looked pretty proud of herself. 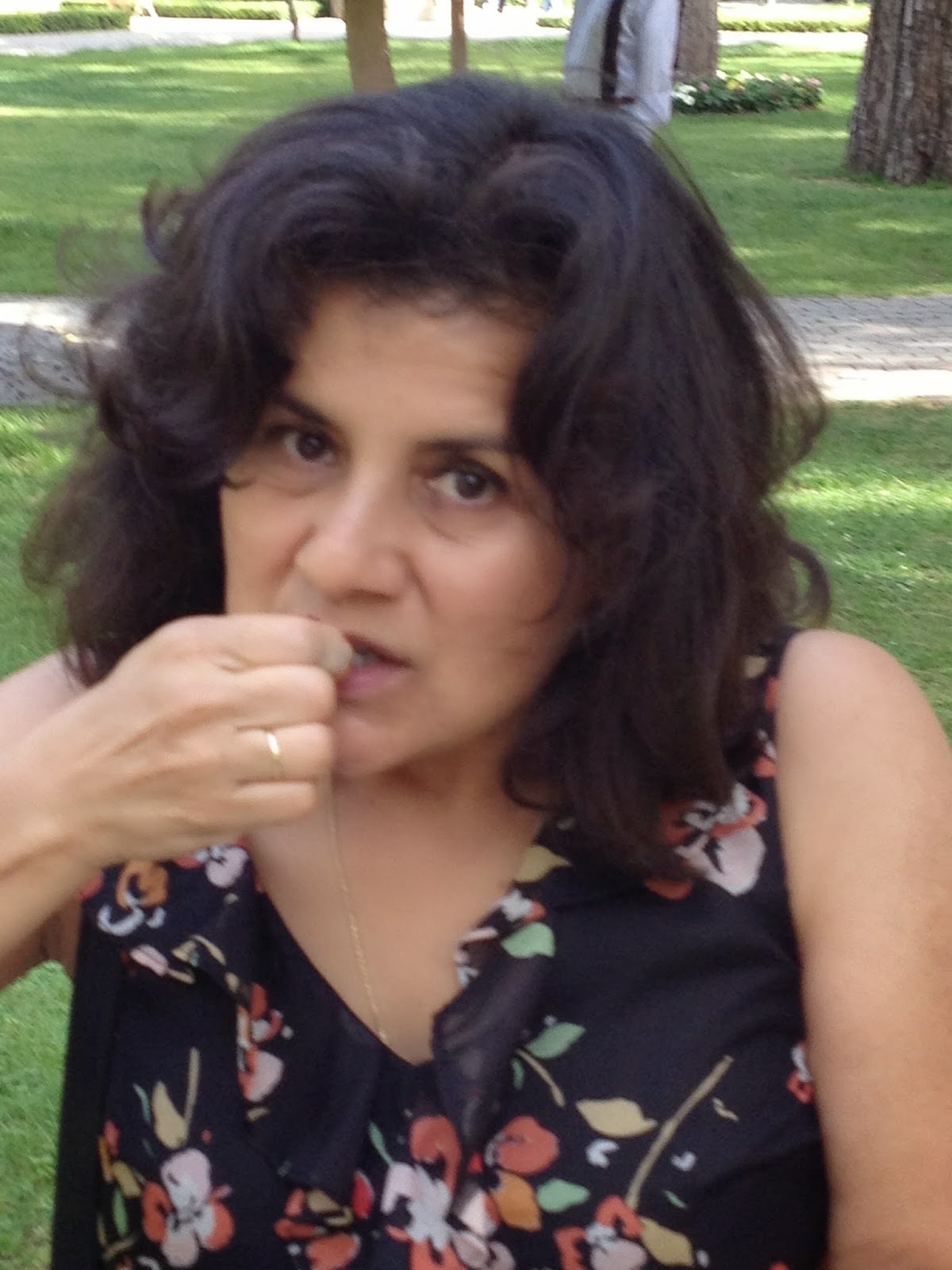 And seemed to really enjoy the berries.


You know Christine and I aren't much for watching TV. And we don't watch it at all here. But we were given all five seasons of "Downton Abbey" by another teacher this year and quickly became addicted. Around the apartment now we often talk to eachother about the characters like we know them personally. For instance, we really like the old butler, Mr. Carson. And we get so angry at that smug bastard Thomas and wonder when he's going to get fired. We can't wait for Season 6 to start this fall.

When we were in Cappadocia, we spent a day in the lower part of the region. In the town of Gözelyürt, where St. Gregory came from, there is a centuries old monestary. This is where the beautiful Gregorian Chants originated. A sweet little village girl, about ten years old, showed us around the monestary and nearby well with its "healing waters." (The well came in handy because minutes before I had once again banged my forehead. This time on a low doorway in the church). She appears to live right by the monestary, and we gave her a few lira afterward to thank her. She didn't speak English, but we were able to communicate pretty well with her. She didn't want us to take a photo of her, but later her mother and little sister came by, and they didn't mind at all if we took the little one's picture.  Nearly all Turkish people have dark eyes, but look at the baby blues on this little angel. 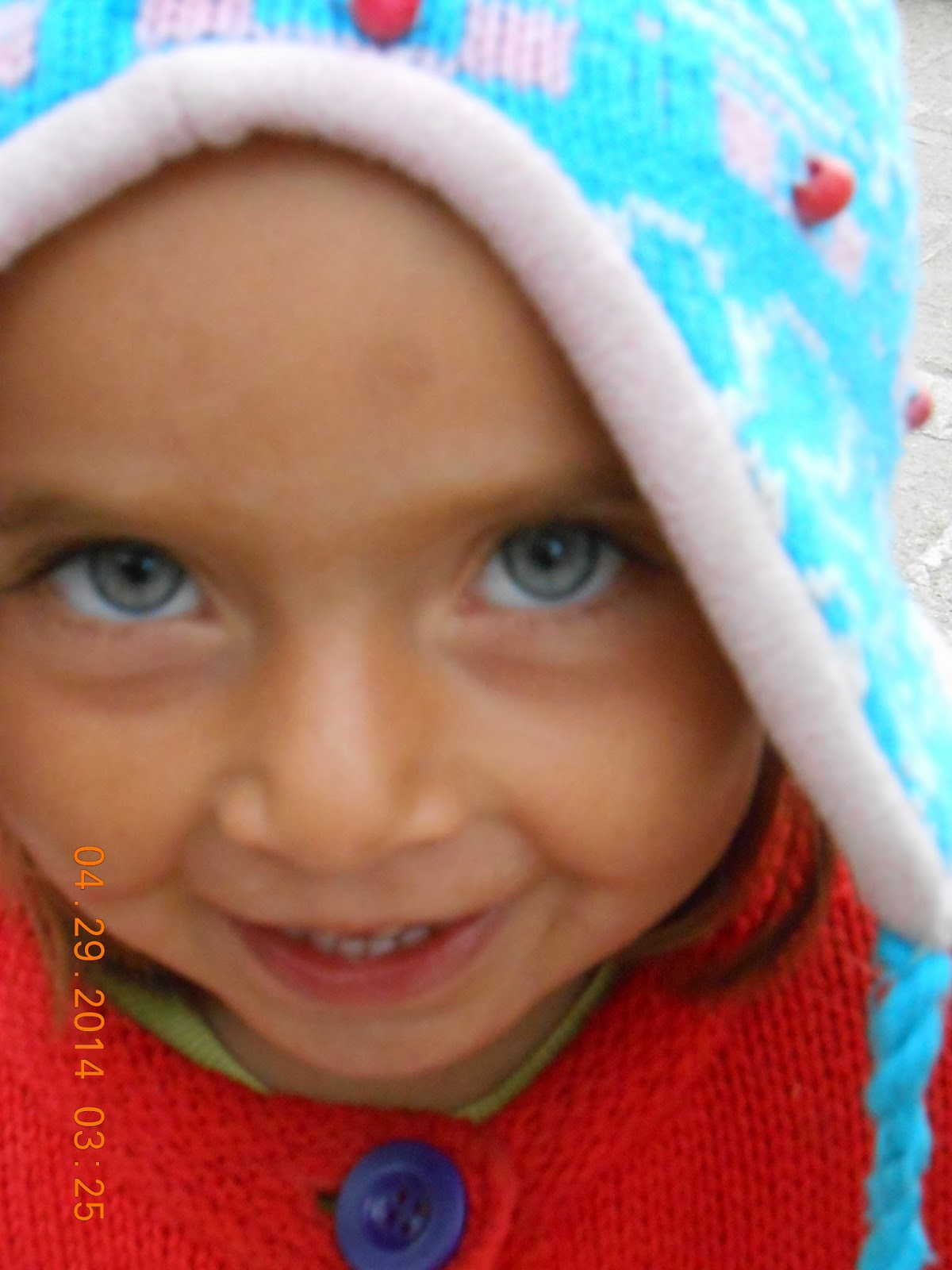 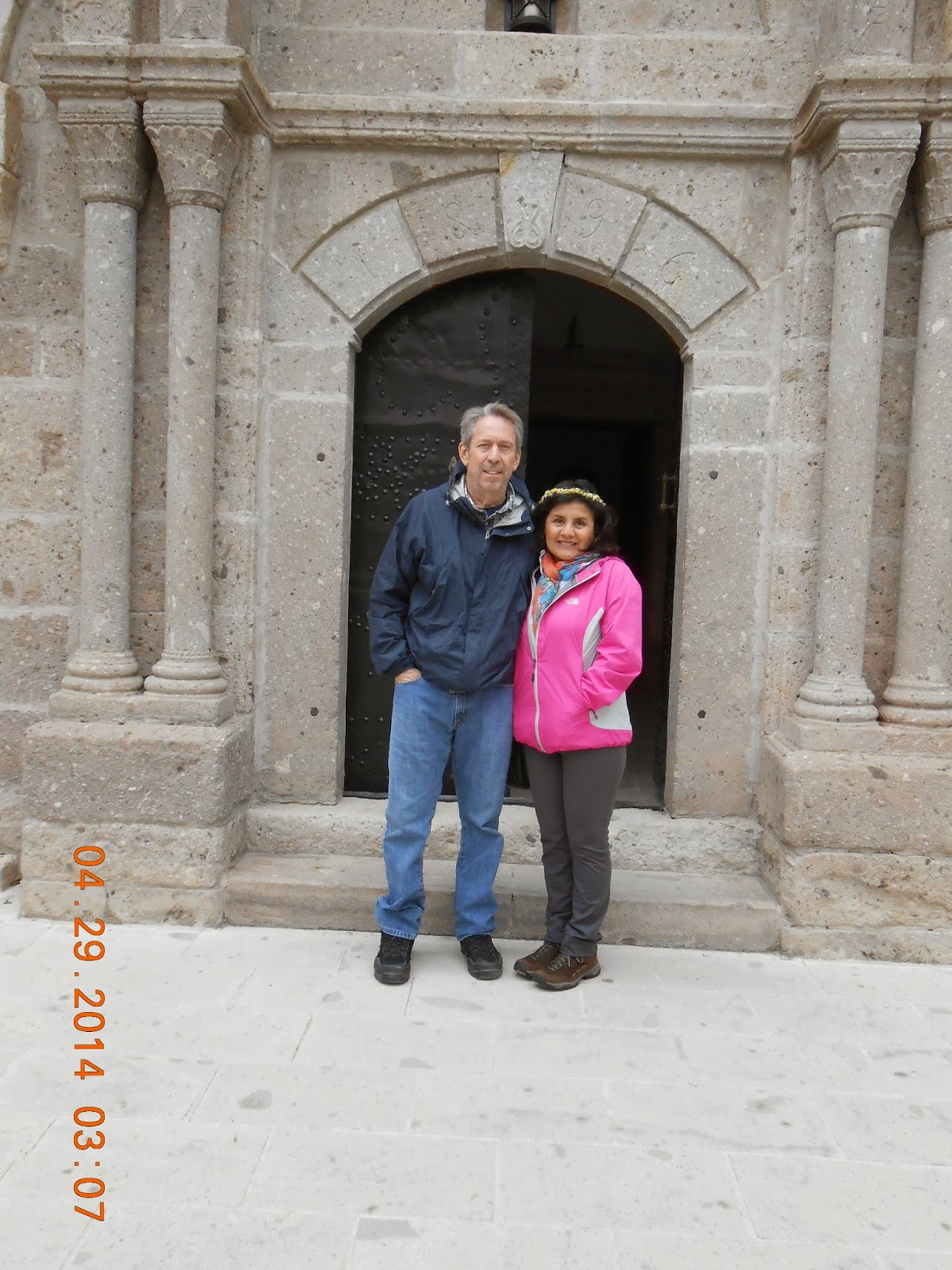 Here we are in front of the monestary, right before I smacked my head inside. Our young tour guide made the wreath Christine is wearing and gave it to her. 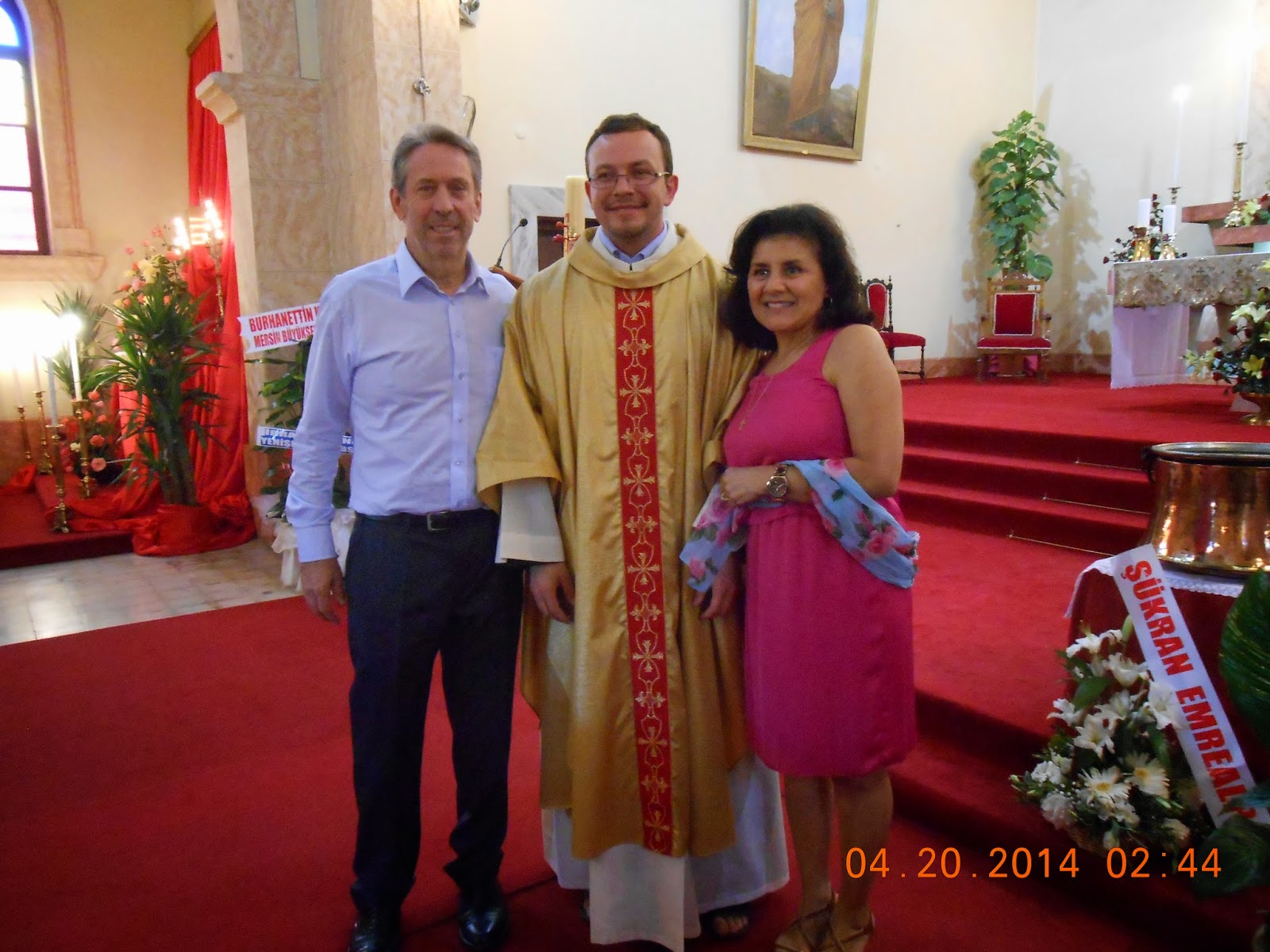 Easter Mass in Mersin with Father Paul, a native of Poland and a great guy. He welcomes and gives to people of all backgrounds, no questions asked. Besides the regular Turkish parishioners, there are quite a few Syrians and Africans who also attend and are part of the church community. 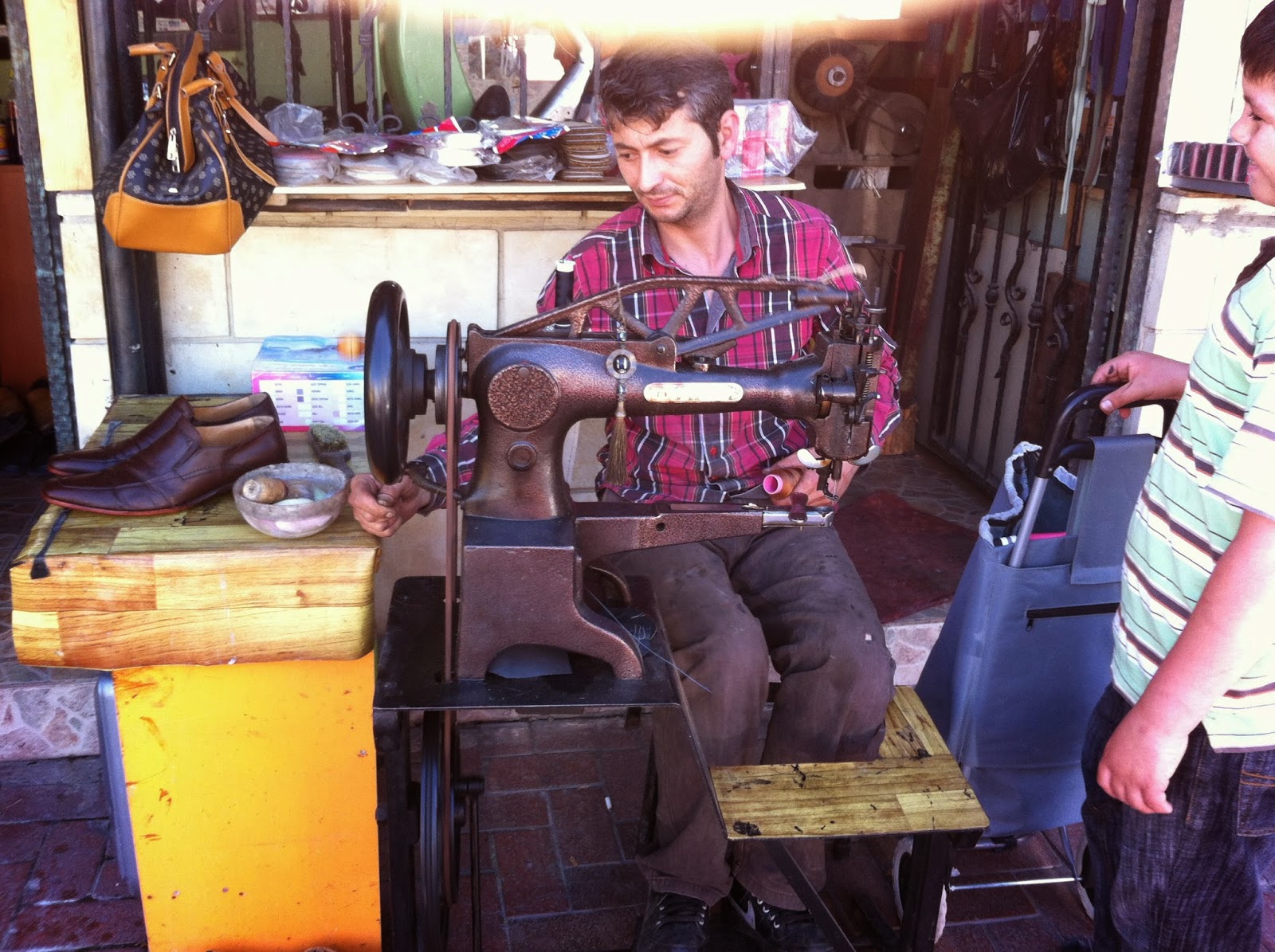 This is the brother of our shoeshine guy. He is a tailor in the shop next door and uses this old foot pedal model to do beautiful work. 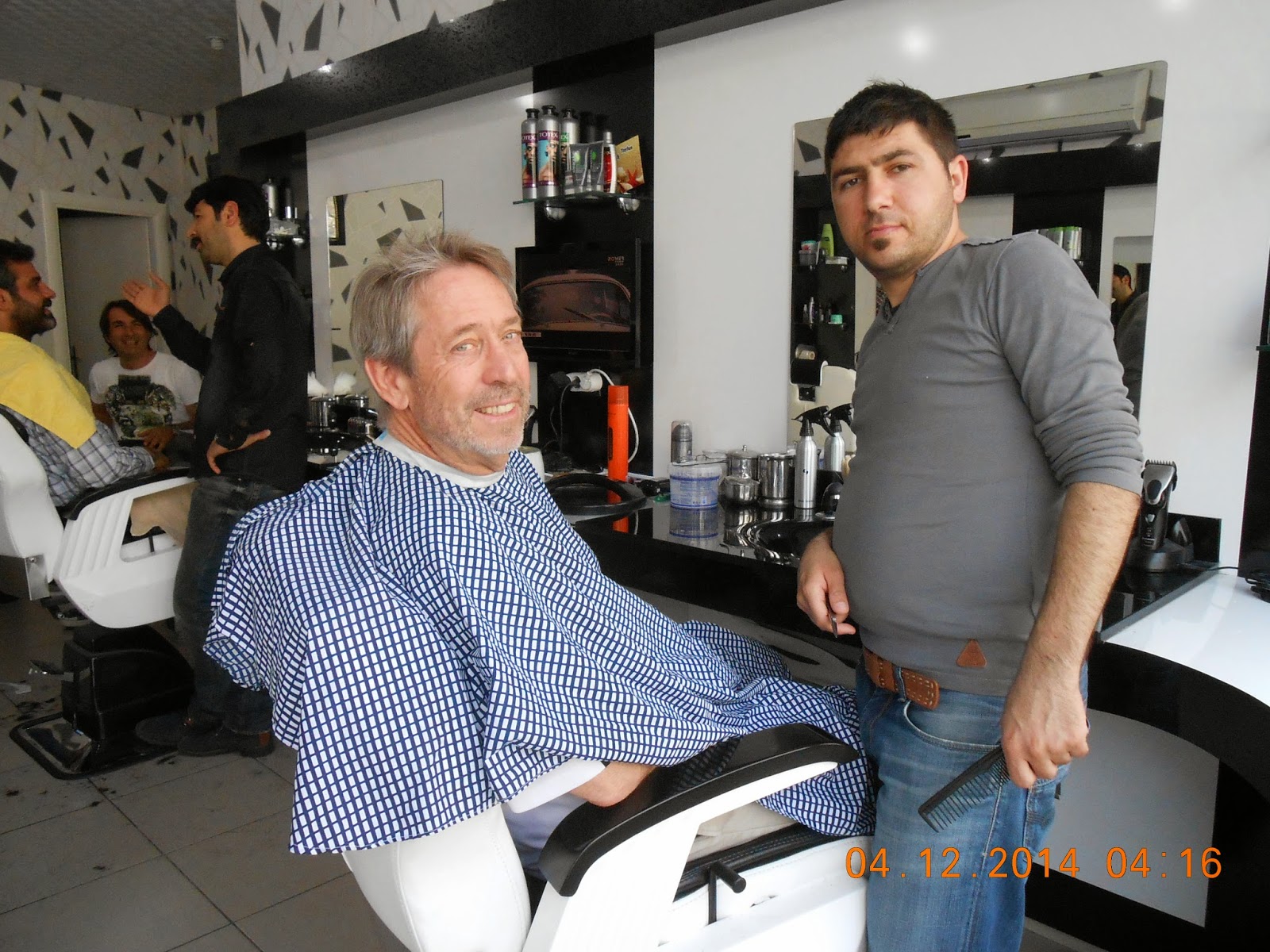 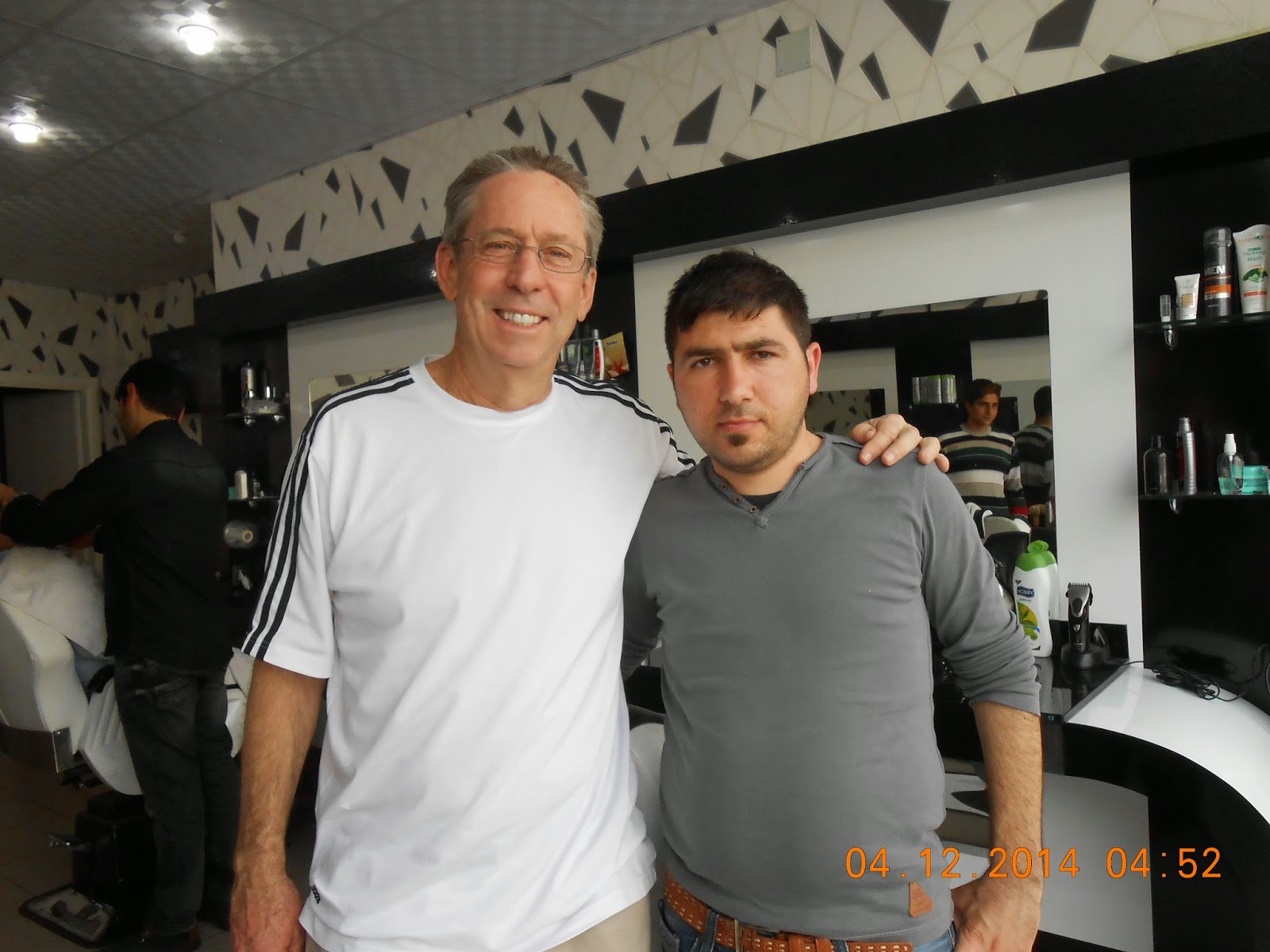 Before and after pictures with Dürük, our neighborhood barber. 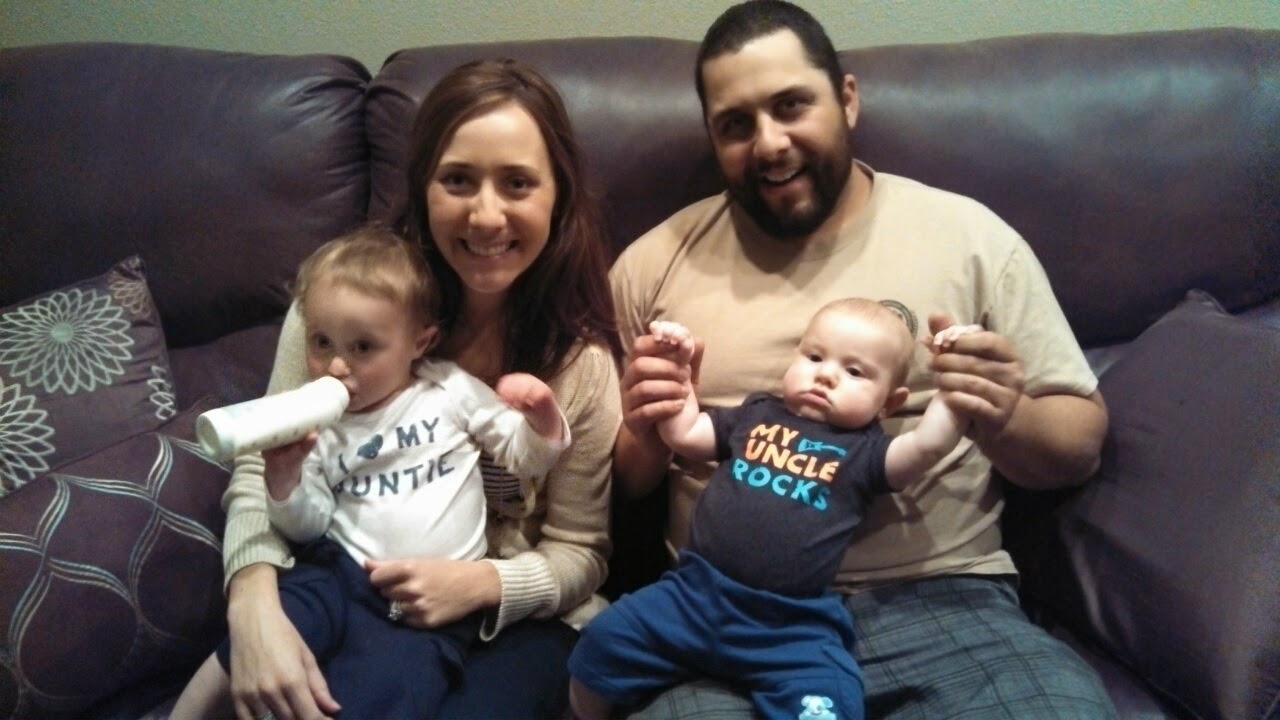 And are you ready for this? Patrick and Kari will be bringing a little girl into the world this August! Our first granddaughter!

School ends here on 17 June, and we'll fly home on the 28th. There are some school matters the teachers are required to work on following the last exams. So we'll stick around and maybe do a bit more traveling too in Turkey before we leave. Take good care of yourselves, friends.


Thanks for reading, and we'll be looking for you this summer! 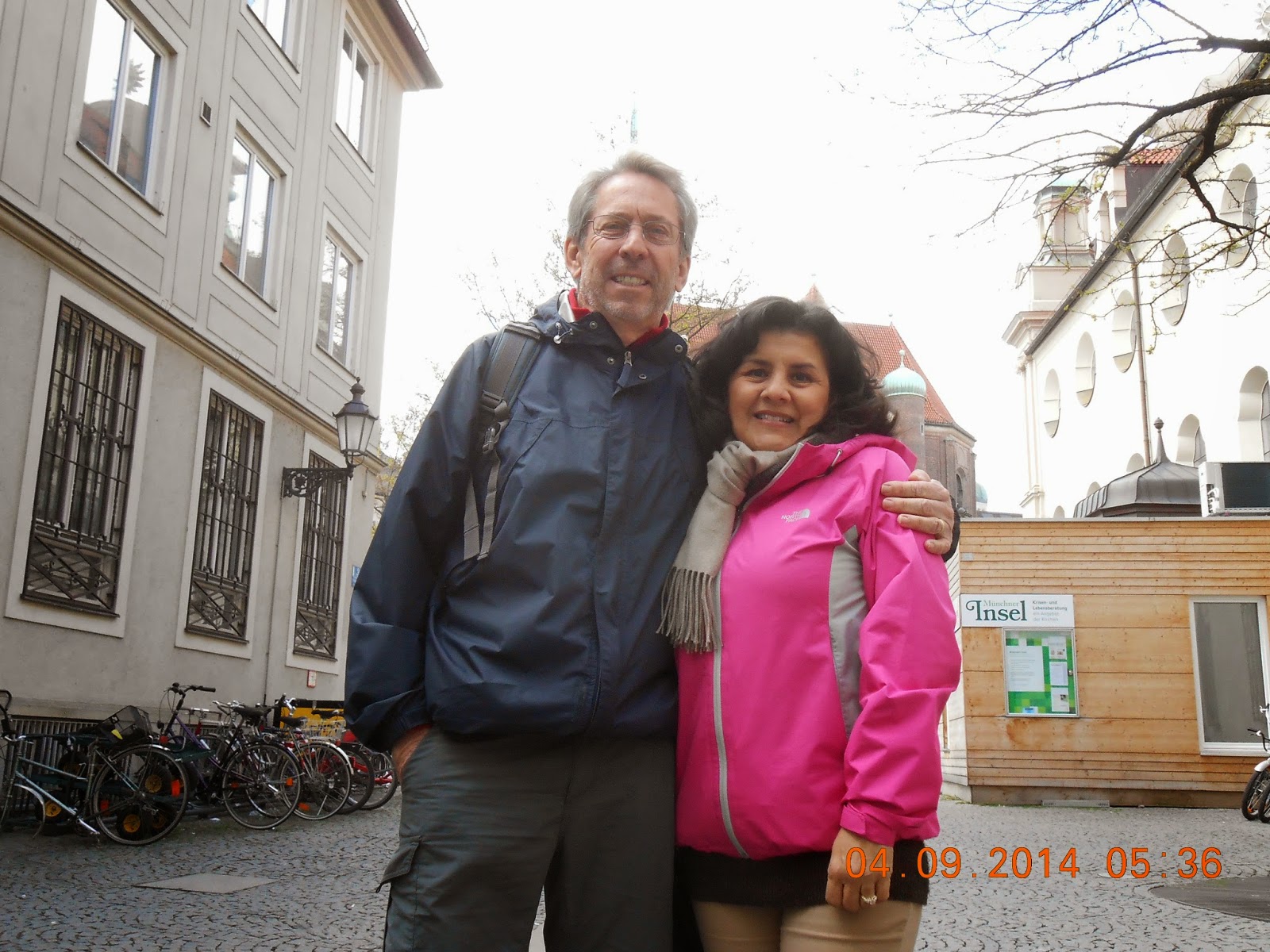