Notes on a Turkish Train Pass #3

It's Sunday evening here in Turkey. About 4:20, so the sun is starting to fade. And it's turned cold. When we first arrived here in August, with temperatures and humidity both in the 90's, I couldn't have imagined it would ever get this chilly. Daytime temps have started in the upper 30's then peaked in the high 40's. Still not much in the way of rain yet, but the locals tell me it will come. Fast and hard. School is going fine, and I continue to be amazed how much like American kids my students are. The two big recent events for me are both negative. The first is that Christine has gone home for six weeks to be with family for the holidays, and especially to be there when Jacqueline and Brandon welcome their new little bundle. Any day now. It gets pretty lonely around here without her. The second is that I recently tumbled down some stairs, in the dark while coming out of my school building, and tore a ligament in my right ankle. I was completely sober. I'm in a cast now and hopping around like a kangaroo rat. It's funny how we suddenly realize sometimes how much our lives turn out to be so similar to our parents. Not exactly of course, but in little things you end up doing that your parents did. For those of you who knew my dad, here's what I mean. Like him, I make my living sitting at a desk much of the time, and shuffling papers in my hands. He was a cartoonist for many years and was always flipping back and forth the pages of whatever story he was working on. I sit and grade papers. And back to the point I started to make. He suffered from arthritis, badly, and for the last fifteen years of his life, he walked with a cane because he had so much pain throughout his body, especially his legs. And now here I am, cane in hand, walking a lot like he did for so long. Everytime I see my shadow limping along, I can't help think how much I feel like old Hank.
Before I get to the latest notes on a Turkish Train Pass, there's one really great experience I'd like to share.
I'm an advisor for the Bookmobile Club, one of the community service clubs on campus. Each student here is required to do community service throughout the year. A couple of Saturdays ago we took our dozen or so club memebers to the Kaleburcu Ilkokulu School. Kaleburcu is a very poor village on the far outskirts of Tarsus, with a school much different from Tarsus American College. It is in poor condition, has very little school materials, and in winter the small staff has to round up wood to burn through a central fireplace and piping system to keep its five rooms warm. Our students are most privileged in comparison. We gathered a lot of used children's books, in Turkish of course, and took them out to the kids in the village. We had the kids check them out to see what a library system is like, but of course we don't care if we get them back on our next visit in January. The faces and reactions of those little kids is one of the best memories I'll take back from this adventure. I'll show you some pictures in a minute.
And now, back by really no one's demand, edition three of Notes on a Turkish Train Pass:

Spending time here in Tarsus you constantly see the old and new side by side. For example there is one fairly new shopping mall here. Small by American standards. But across the street and in the surrounding area there are mosques, old walls, streets, and dwellings that are hundreds, and in some cases thousands of years old.

Each Monday morning and Friday afternoon the school week begins and ends with a patriotoc flag ceremony. Every student and teacher in the school files into the small, covered stadium area for the event - the bringing in of the Turkish and school flags by two students and the singing of the Turkish national anthem. The Americans stand silently at attention because we don't know the words, but every Turkish teacher and student sings every word of the anthem. No exceptions. I get a kick out of seeing my little rascals standing and singing so seriously and patriotically.

One of our favorite "guys" in town is Darüt, the "shoeshine guy." He doesn't speak a word of English, but he is so dedicated to doing his job conscientiously, it is a joy to be around him. He charges what would be in American money about a dollar twenty five for a fantastic job on a pair of shoes. Once when I tried to pay him more, he refused it, looked to the sky, and said something with the word "allah" in it. He was clearly saying that he does his work for God.

When  Christine and I go to the shoeshine guy, there is usually a very old man spending the day in his shop with him. I'd guess he's the grandfather. The old man is always laughing and shaking hands with us and pointing to some paper money that is pinned to a wall. It looks to me like a small collection that includes bills from several countries in the Middle East. Anyway, the old guy loves to point and laugh at at this one bill that must be from Iran because the Ayatolleh Khomeini's face is on it. The old guy laughs and laughs and mockingly repeats "ayatollah." He does the same thing every time we go there.

You should have seen the annual Teacher Appreciation Day here. It began with a breakfast and ceremony for the teachers in the stadium. Throughout the day, the kids brought cards and goodies to their teachers. I had about twenty kids write "I love you" to me in their card. In the afternoon there was a reception in the student center with more food, music, and dancing. Then about 6:30 in the evening every teacher and staff member was bused to Adana, a large city to the east. There it was appetizers, steak dinner, music and dancing, and all the drinks you wanted until late in the night. On the school.

Our main local Turkish dishes are tantuni (basically a burrito without beans or rice) and kebap. Everyone in Turkey raves about Adana Kebap. But it's a very fatty chopped up beef on a stick to me. Tastey, but that's because of all the fat and salt. Christine and I get the tavuk (chicken) kebap instead if it's available. And then there's lamachun. Christine's favorite. It's similar to pizza but much lighter, thinner, and spicier. You can roll it up if you want. We constantly eat salads, and we now eat yogurt and black and green olives by the bucketful each week.

And I've been waiting to tell you about the haircuts here. My haircut guy is Dürük, and his shop is a two minute walk up the street from campus. He gives the most thorough haircut imaginable. He first chops my hair very methodically. Then he gets out the clippers and edges everything. Next he razor cuts my neck then edges again, including high on the cheekbones. Then he douses me in cologne and gells my hair. Now comes the best part. He trims my eyebrows and the hair in my ears. Then he tilts my head back and trims the old nose hairs, though I tend to have very few. He does a damn good job too. And for the grand finale, he lights on fire this thing that looks like a giant cuetip soaked in something flammable. He flames it up then ever so quickly burns out any remaining hair in my ears or .... nose! You can hear the singing, and even when I get home and shower, I can still smell the singed hair in my nose for a day or so. I'm going to have Christine film it for you next time.

And now finally some more pictures for you. G-Rated this time so you can have the kids look at them with you if you like... 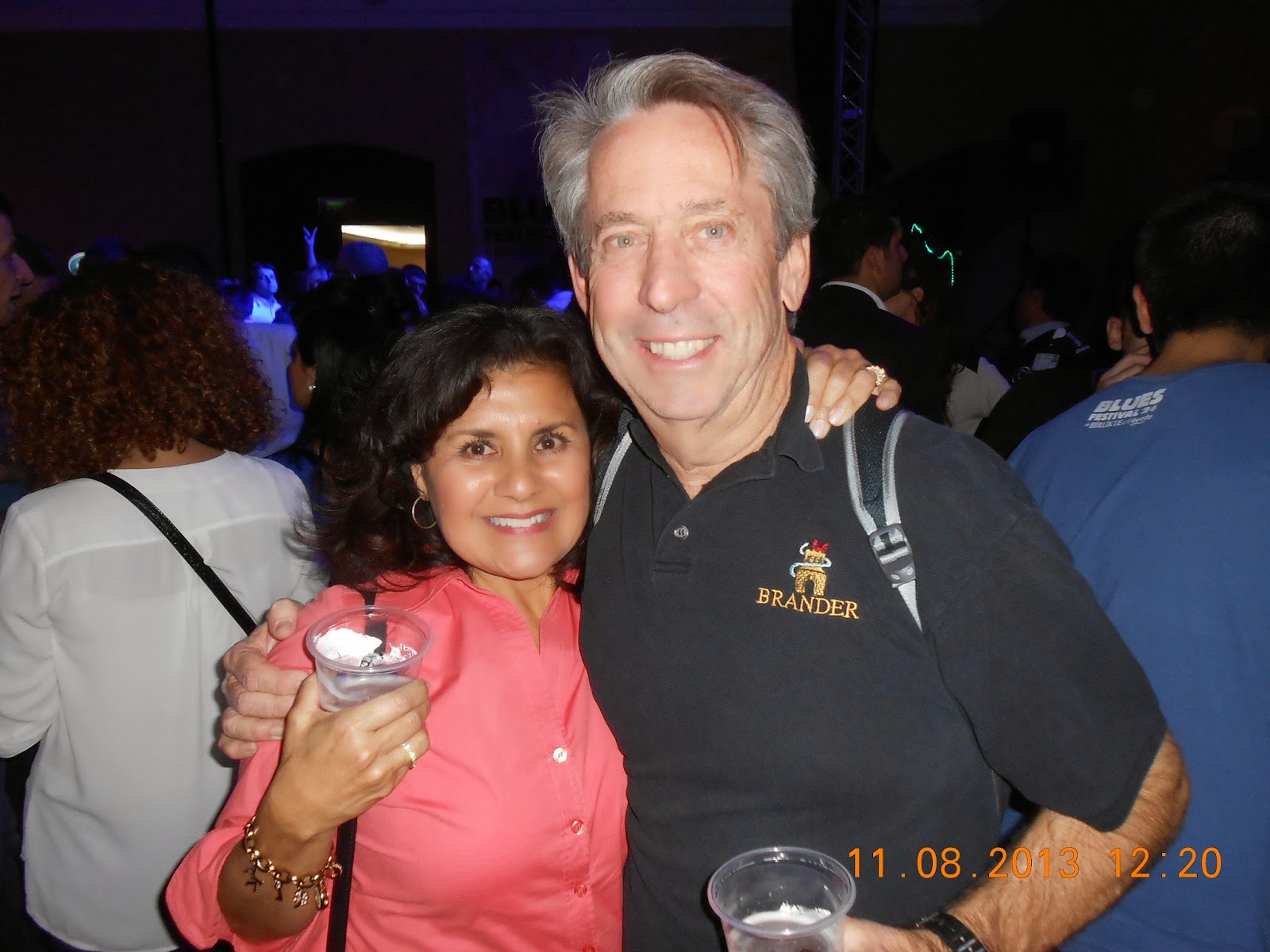 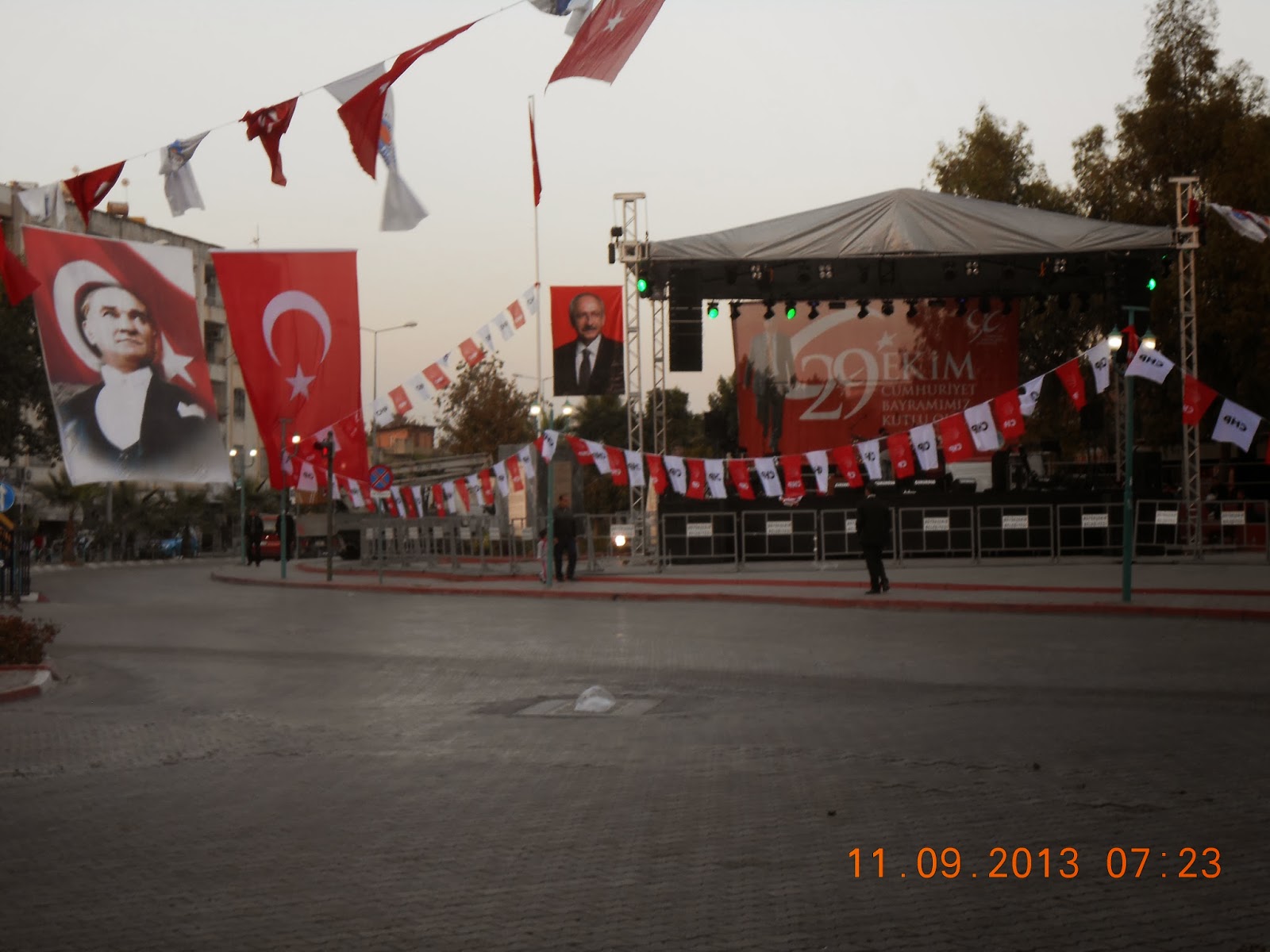 All across Turkey, the anniversary of Atatürk's death is a huge event. Here's a street in Tarsus before the evening got started. 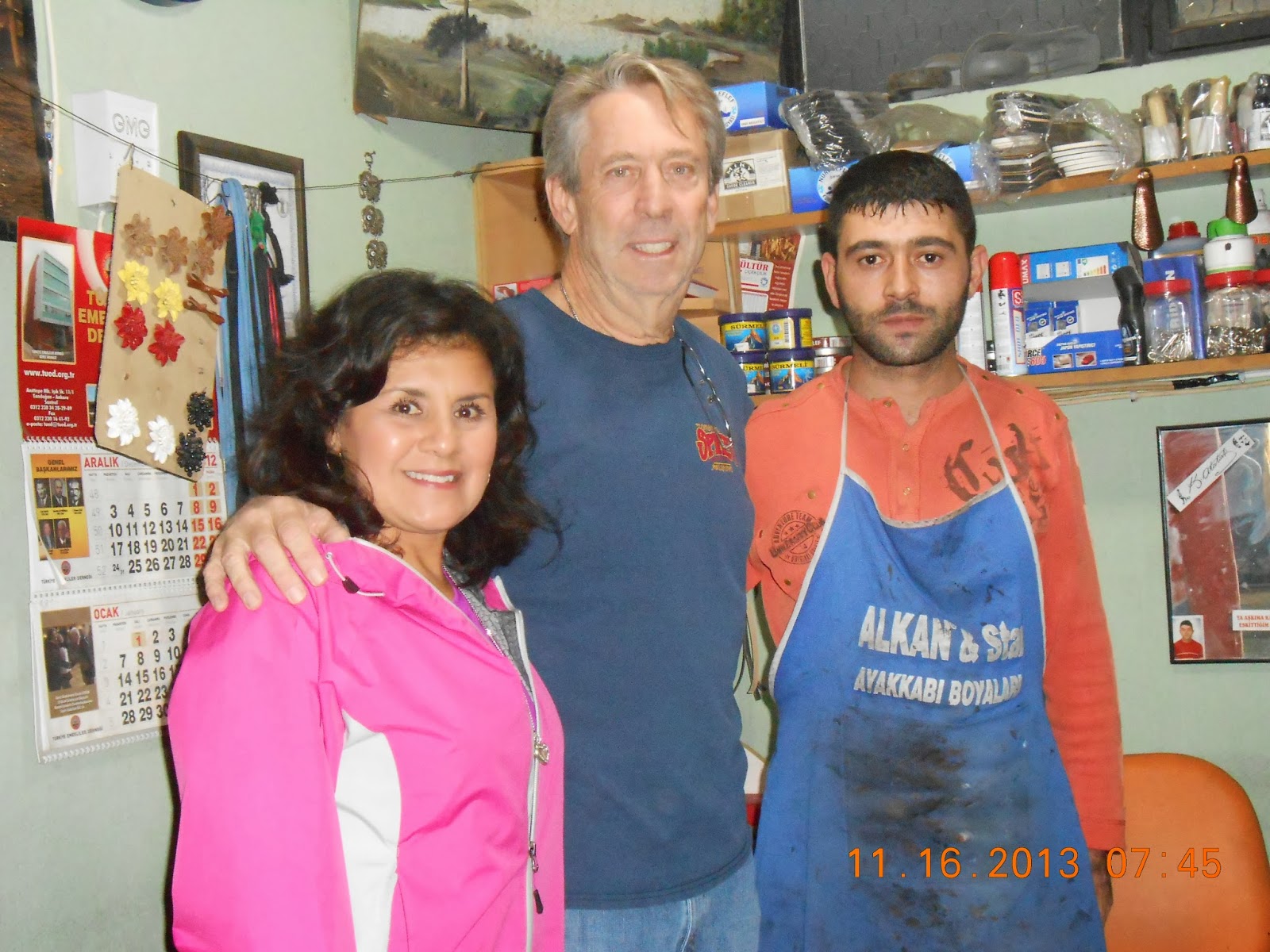 With Darüt the shoeshine guy. 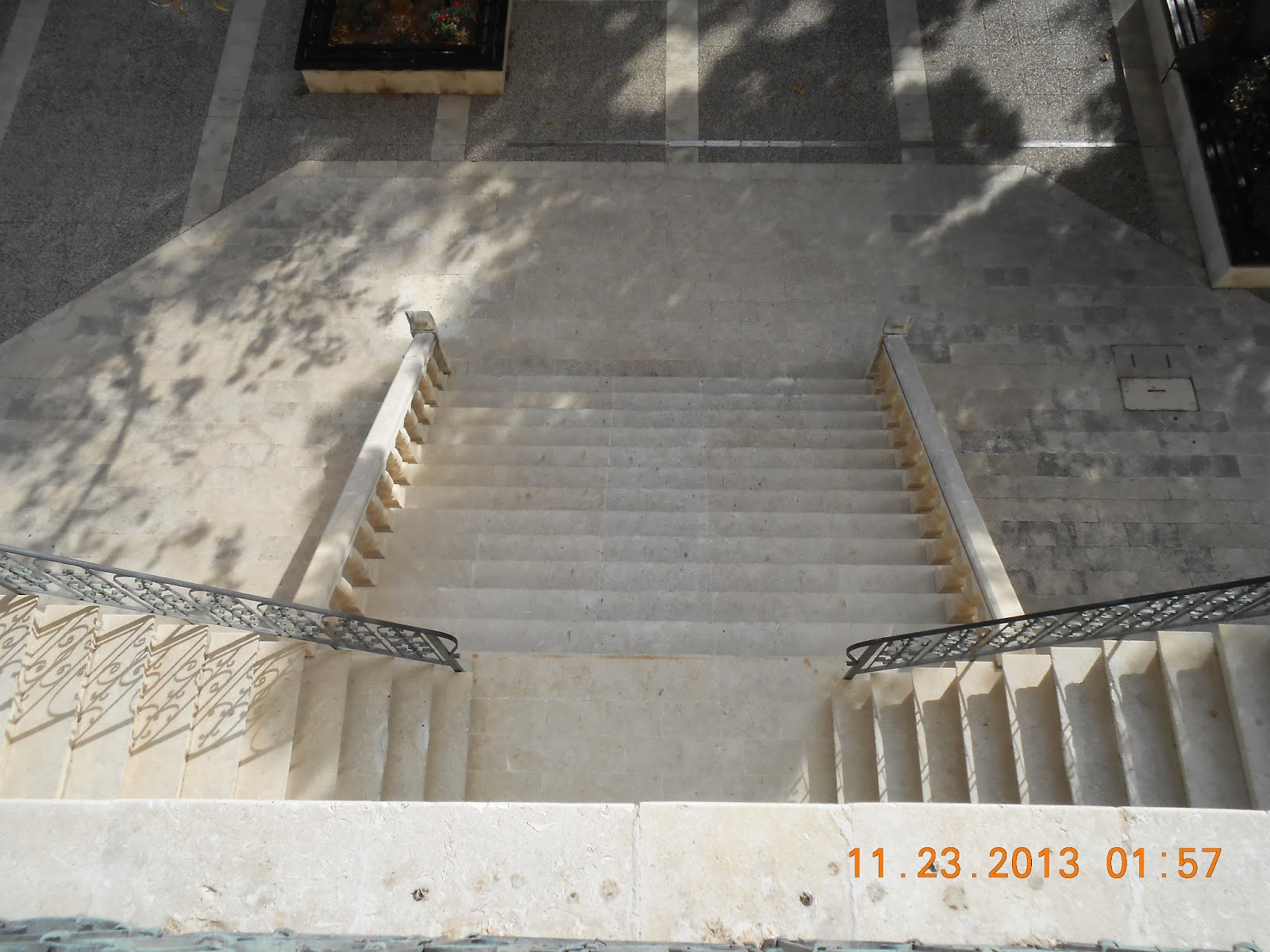 I tripped at the bottom of these stairs. I don't want to say how many stairs I rolled down, but it was more than one. Some of the children at the school in Kaleburcu. 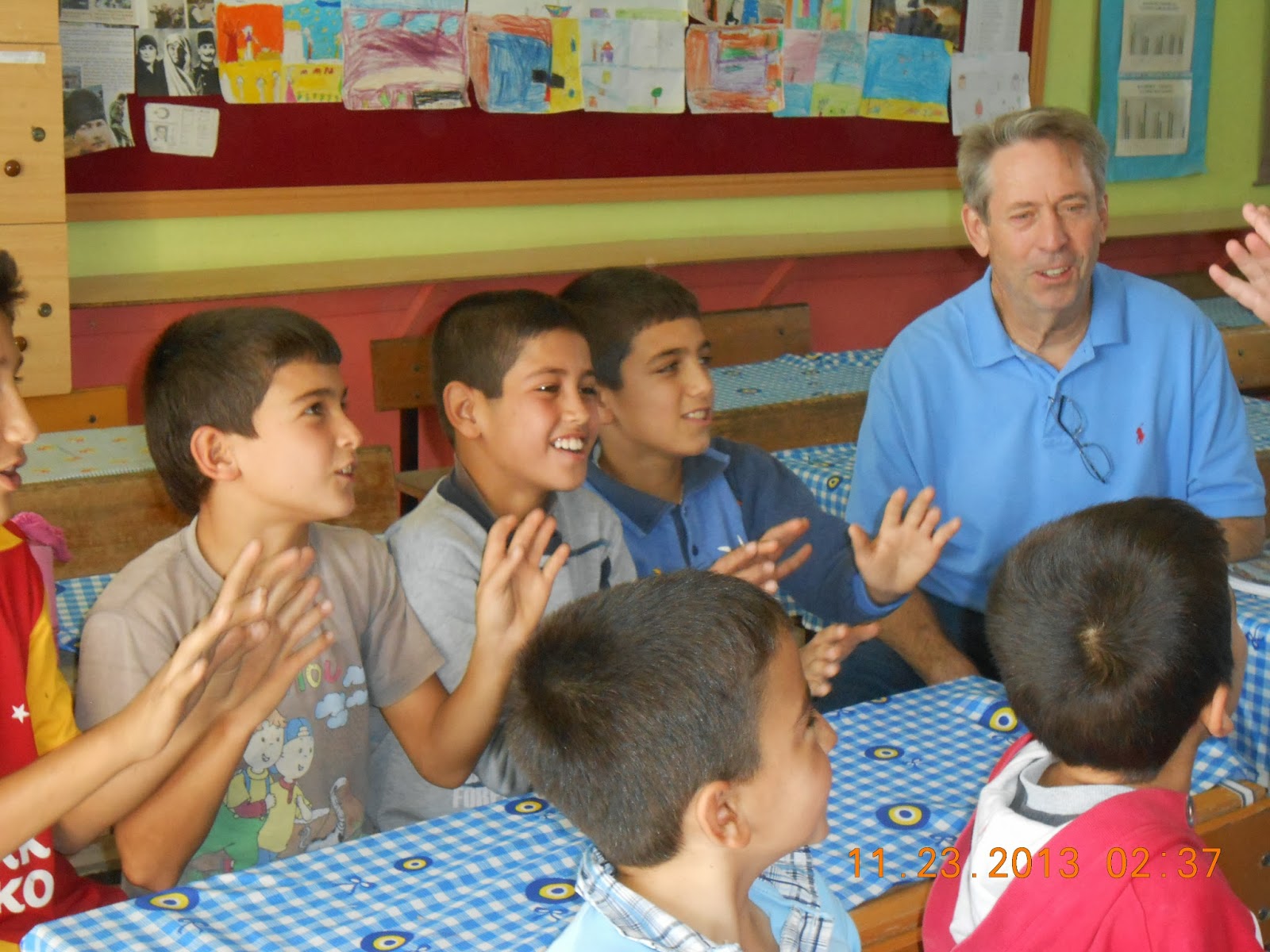 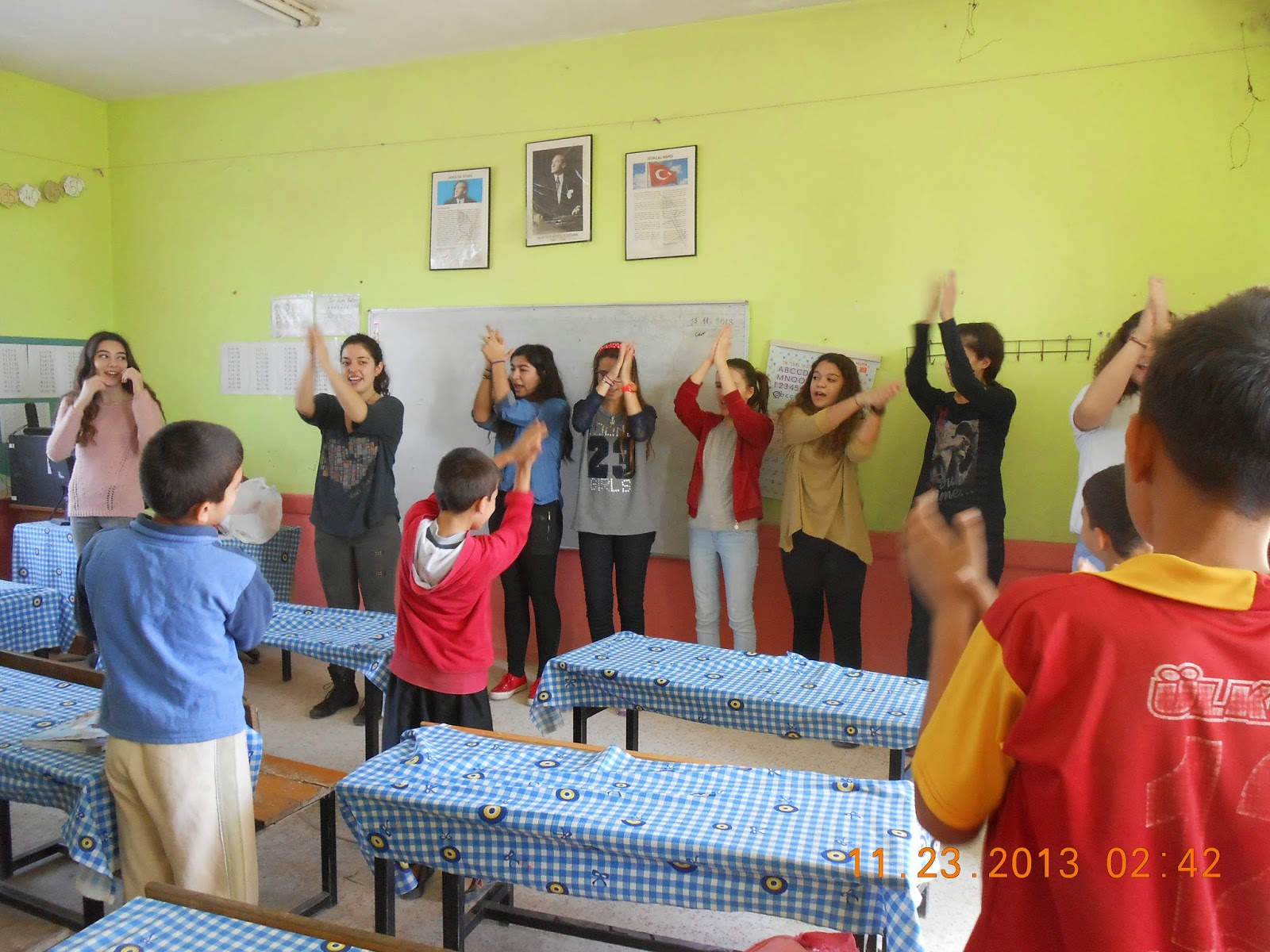 Our students did the teaching. 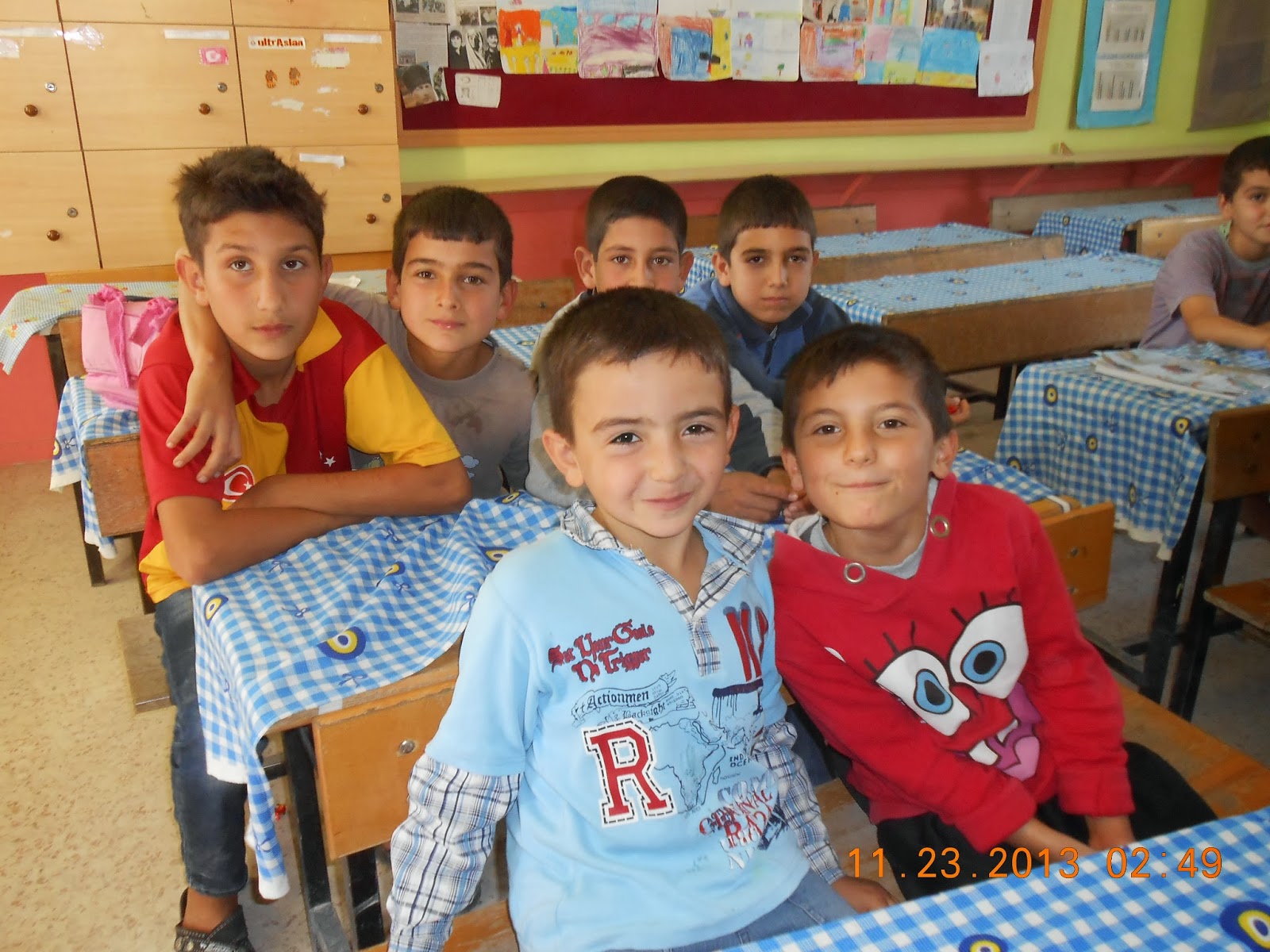 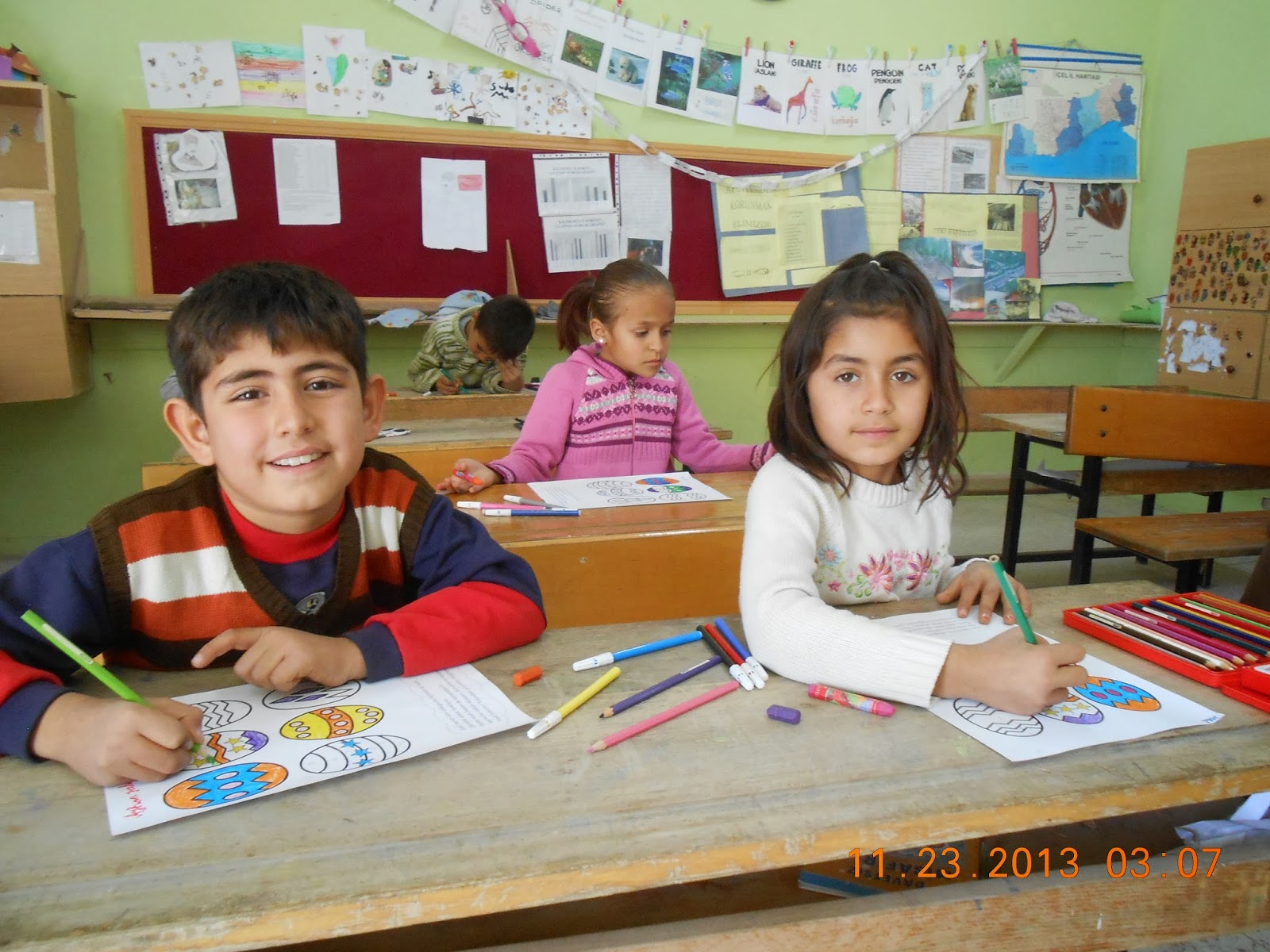 The little girl on the right is one smart cookie. Our students loved her. 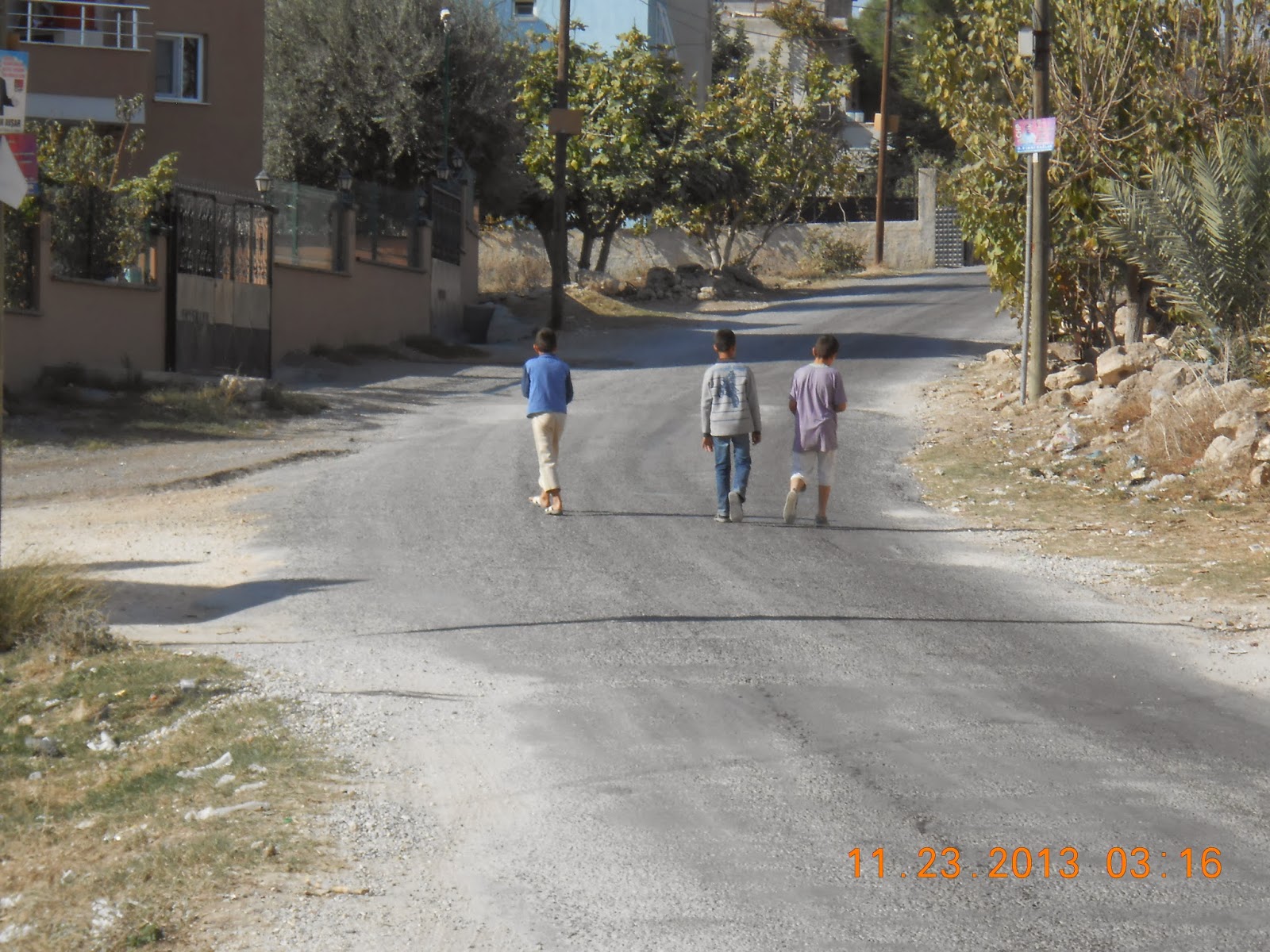 Three of the boys heading home with their treasured books. 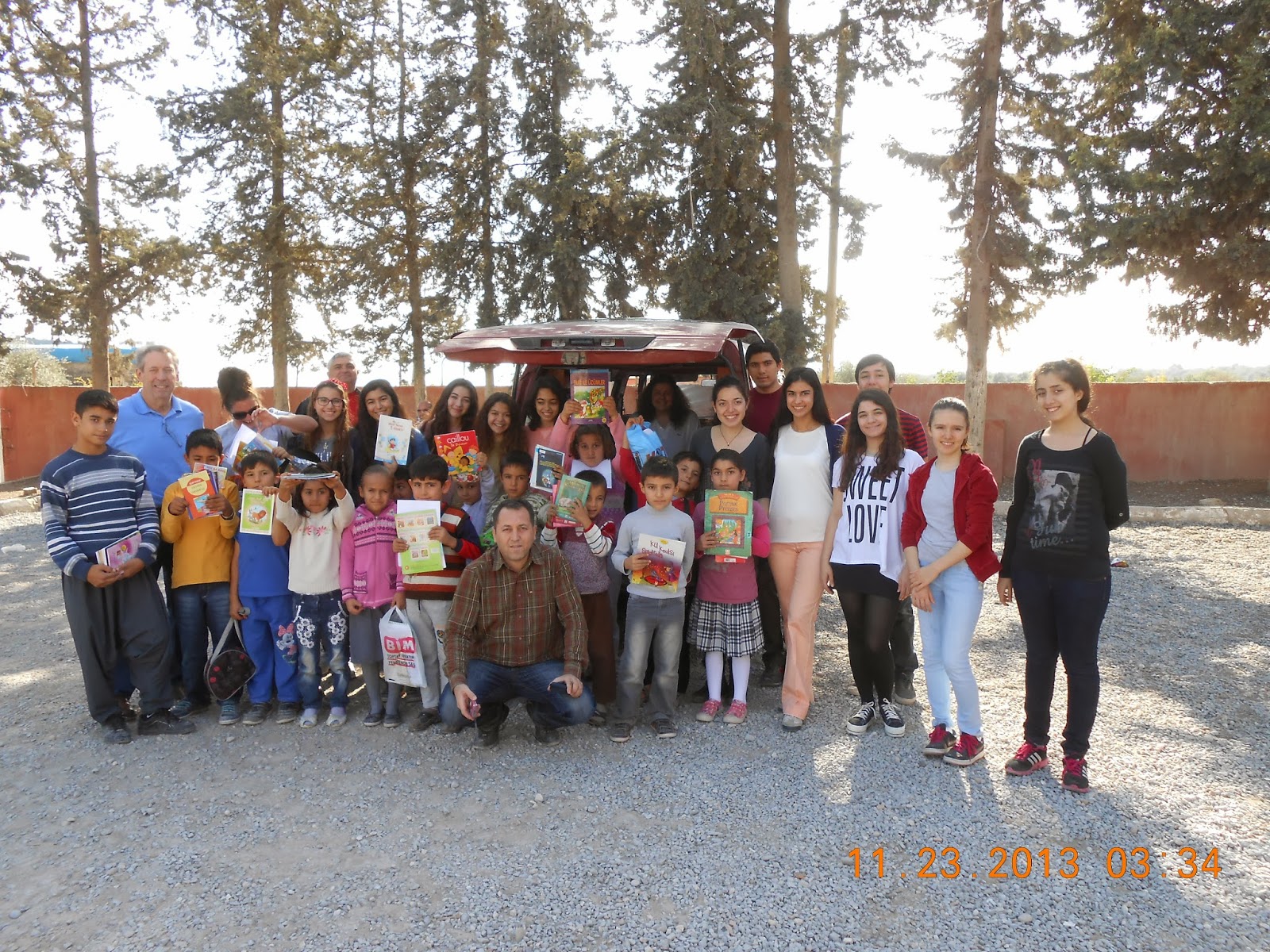 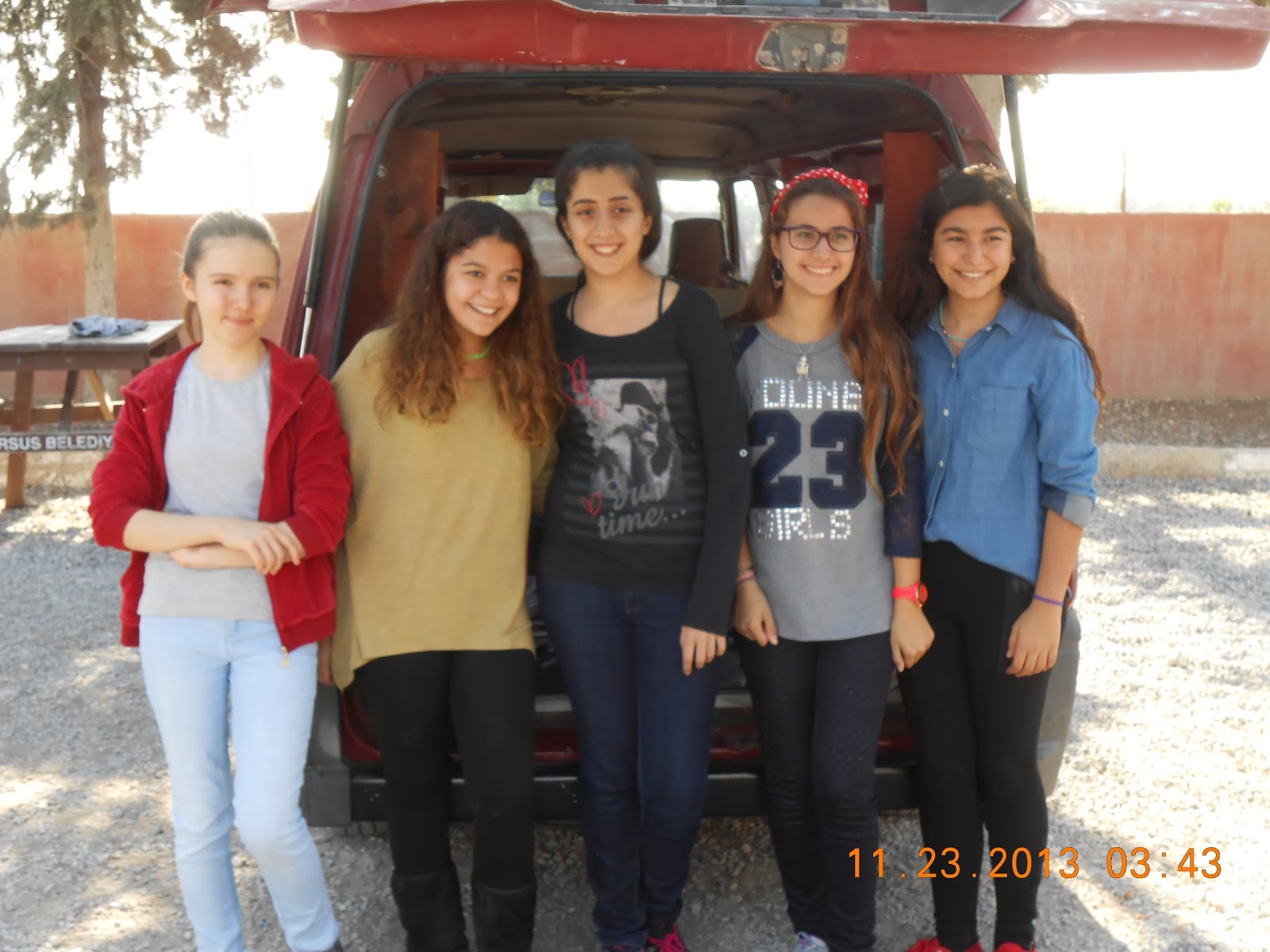 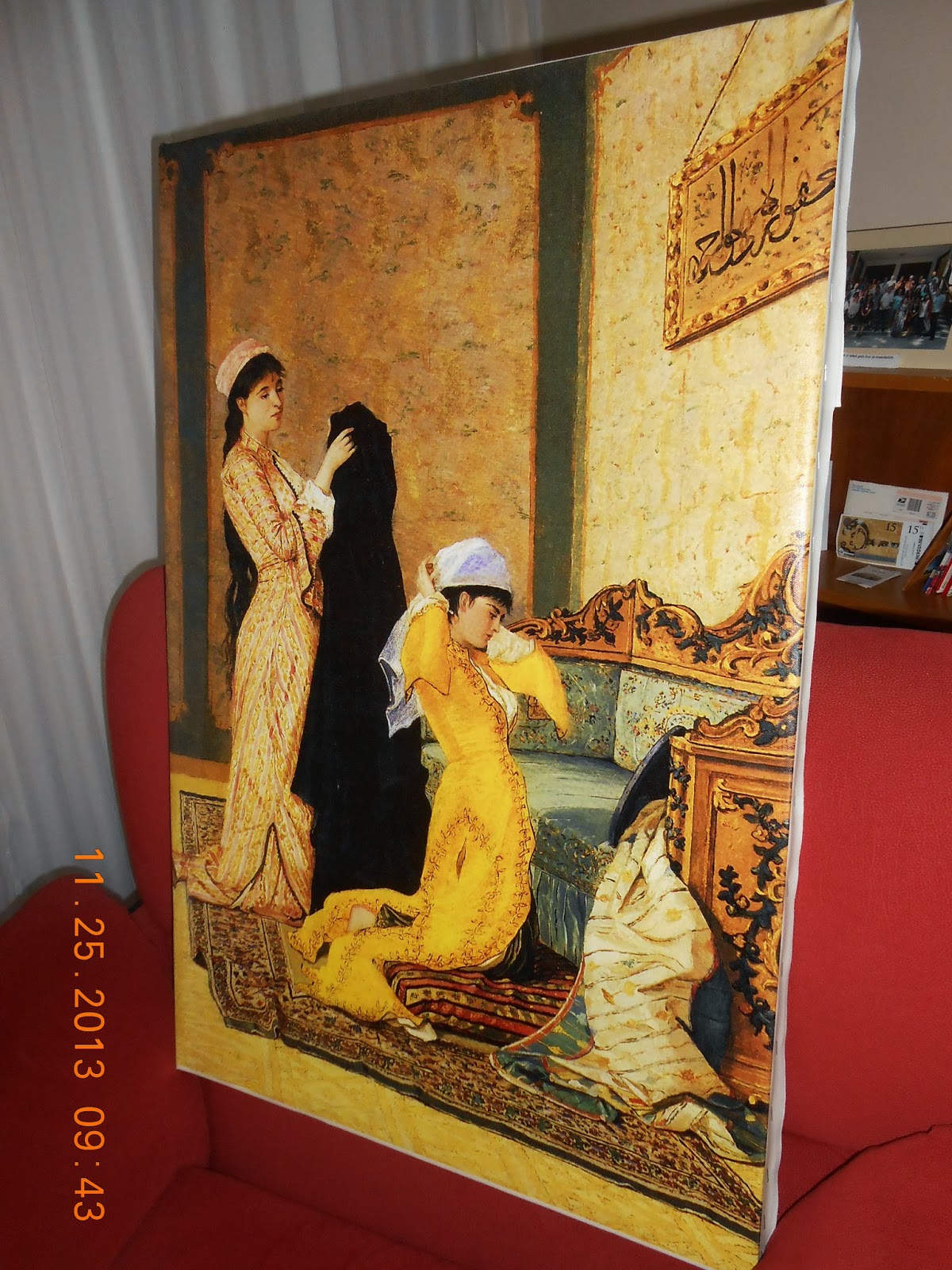 Christine loves this picture and put it on one of our walls. 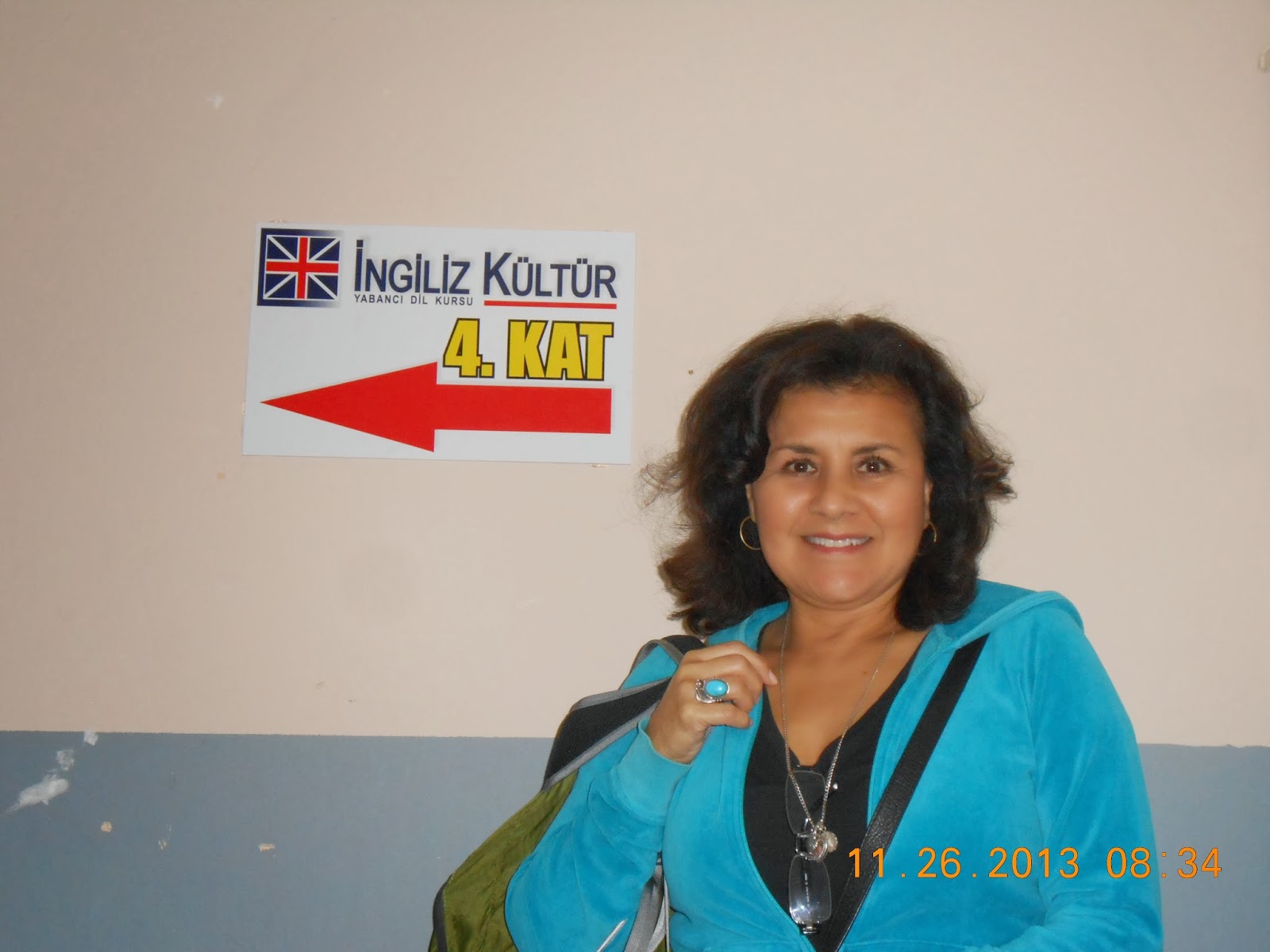 Here's the teacher, heading to her class at the British English School. Don't mess around with her either. She's got a temper. 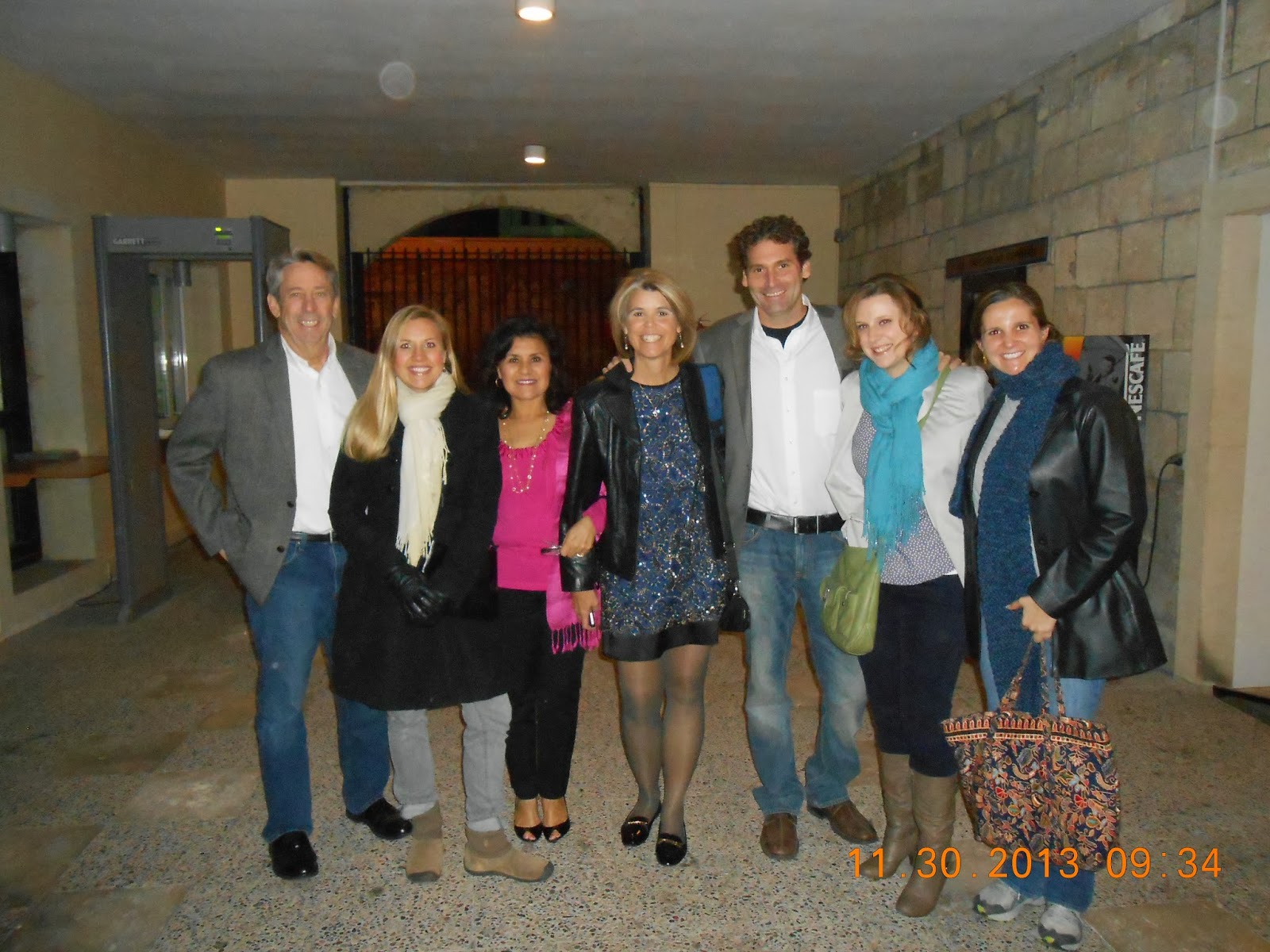 Some of the Americanos on the way to the opera in Mersin. We saw "Carmen." 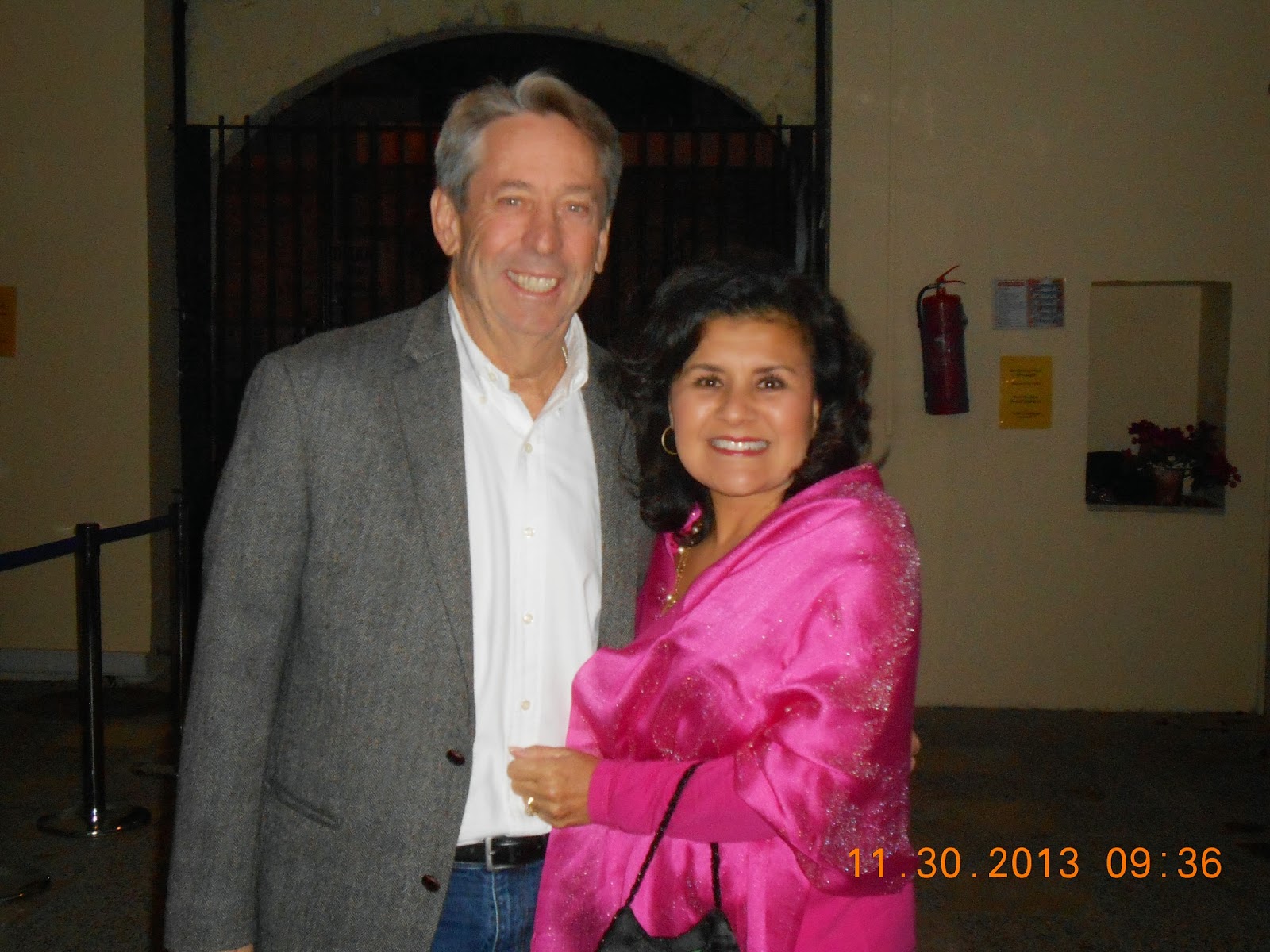 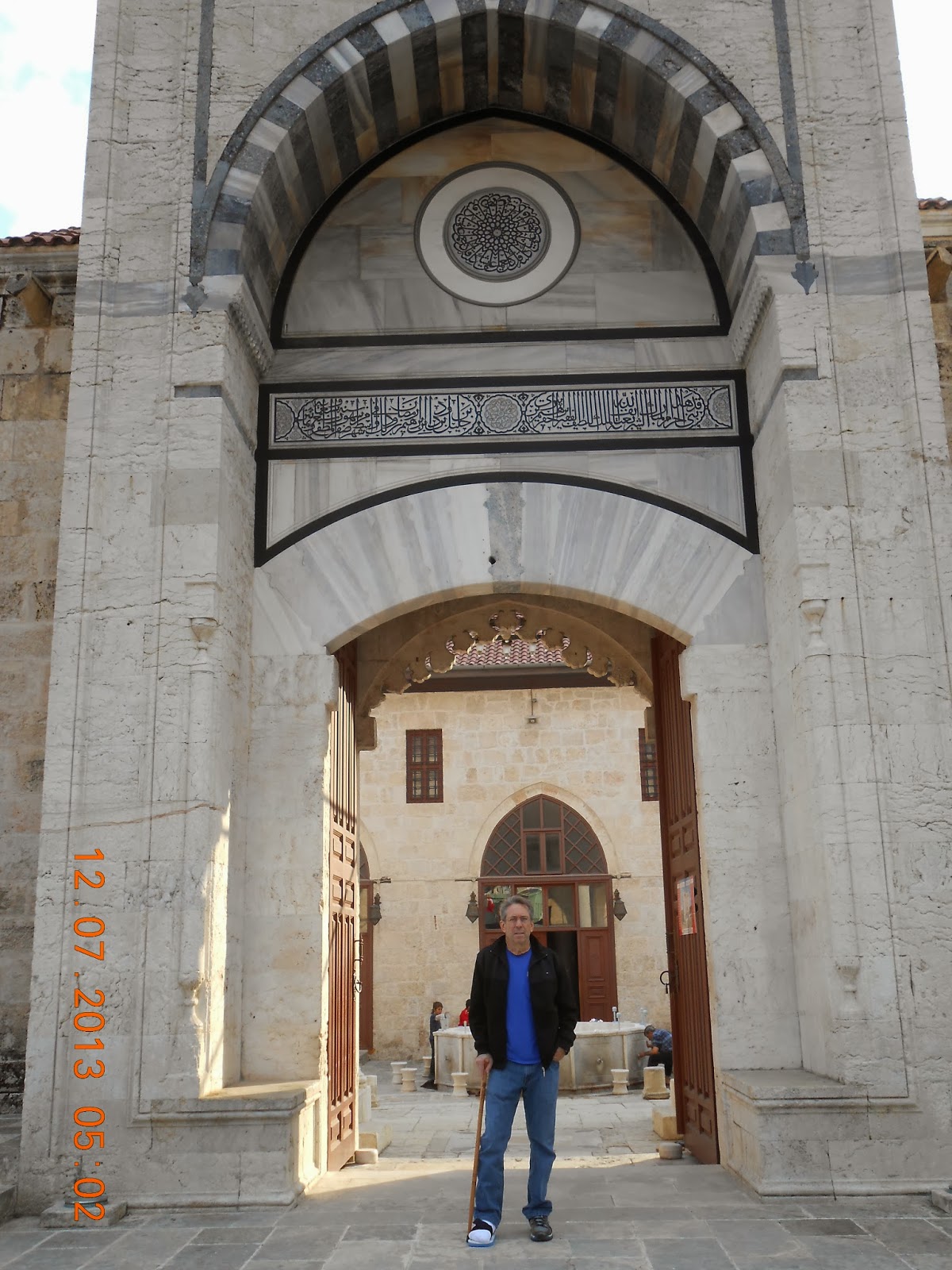 At one of the old mosques in Tarsus. Watch your step.