Notes on a Turkish Train Pass

Hello Folks,
I hope you are all well. It's been busy as heck the past couple of weeks here in Tarsus, but Christine and I seem to be settling into a pretty nice routine now that school has started. The first week of classes was very enjoyable. My students are funny, witty, inquisitive, and seem to speak and understand English better than I was expecting. And Christine is really off to a great start. She's volunteering at school here in elementary classes, and working two nights and one day a week teaching English to adults. But rather than write at length, and in wordy fashion, about our experiences, I think I'll write in more of a brief, bullet-point style that'll hopefully be a little easier on the eyes and take up less of your time. So here it is, "Notes on a Turkish Train Pass." Random thoughts and observations of our days and nights here in Turkey:

Things are amazingly cheap here. I had a tailor down the street take in five pairs of pants for me. The cost was about three dollars a pair in American money. Food and clothes are way less than at home.

In that same tailor's shop, there are three old men that work all day and into the night on old foot-peddle style sewing machines. In the states those machines would be classified as antiques.

Turkish weddings can take place on any day of the week, can last for up to five days, and often include fireworks.

The school provides free lunch, as much as you can eat, every day for ayone who works there. Really good, Medıterranean style food.

The Turkish people we've met are amazingly friendly. The other day we were looking for a place where I could get my brown shoes shined. An old man playing backgammon saw me looking around, got up from his game, and walked us several blocks to a little shop where I had them shined for a dollar seventy-five. Then the old guy, who continuously called us his friends, walked us back to where we'd met him and invited us to join him for tea.

Turkish people love tea, really strong, and drink it throughout the day and night. They call it "chai."

I have nine to ten students in my three classes. They stand when the bell finishes ringing, wait for me to greet them, greet me in return, then wait until I tell them they can be seated.

Christine and I walk everywhere we go. We're walking way more than we would at home. I know I've lost about five pounds already, and I'm eating plenty. I'm also drinking plenty of Efes Beer, the most popular brand in the country. Good stuff too.

Every student here is required to join a club on campus and do a community service throughout the year. Every teacher too. I'm the co-advisor, along with Engin, a new Turkish teacher, of the Photography Club. I'm one of three advisors for the Bookmobile Community Service. We'll take books to elementary kids in an impoverished village near Tarsus at least four times this year.

Some of us teachers have discovered a great local tavern for our "evaluation meetings." It's about a three minute walk from campus and has a beautiful, shady courtyard for our meetings. The Efes draft comes so cold that ice is sliding down the sides of the mugs.  It's got a strange name to me, so I'm thinking of renaming it "Smitty's." I'll be sending pıc's for you.

I wear a tie and nice clothes to school every day. Those are the rules set down by the Ministry of Education in Turkey.

Two weeks ago, Christine and I took a bus down to the seaside town of Kizkalesi, about two hours away. We spent the weekend there in the Hotel Angel Saadet, right across from the beach. It's a popular getaway for the American teachers in the area. The owner is an American from Kansas married to a Turkish woman. He's sort of an old hippie who cooks dinner every night for the guests.

At the hotel we had an American music teacher with us, and he was a great musician. He played the electric organ while we took turns singing along. I sang "Crazy," "Yesterday," "All of Me," that sort of stuff. I think I sounded pretty good too, but no one else thought so.

But my students think I am an outstanding singer. Seriously.

I really like living on campus. Walk out the door and you're anywhere you need to be in thirty seconds.

We're not that great at pronouncing the names of places here yet. So we have our regular spots and just call them the name of the product followed by "guy." For example, we go to "Chicken Guy," "Cheese Guy," "Nut Guy," "Beer Guy," "Fruit Guy," etc.

We've gone the past couple of weeks to a Catholic church in nearby Mersin. The mass is in Turkish. Most of the parishioners are Turkish, but there are also Americans, Syrians, Lebanese, Nigerians, to name a few. It's an amazing place with a very good vibe. Most people stick around after mass for chai.

Turkish coffee is strong stuff and has the texture of watery mud. Christine is starting to really like it and often asks for it when we're out. She puts sugar in it.

I am the only Mike in this school.

The kids in my classes seem like members of two cultures. They are definitely very Turkish and proud of it. But they are also pretty Americanized. I've had students tell me they like the Beatles, Maroon 5, and even Johnny Cash.

Students here are not allowed to ask to go to the bathroom during class.

The first weekend in October, Christine and I are flying to Izmir, a large city on the west coast of Turkey. We'll be with a group of teachers and are going to visit the ancient nearby city of Ephesus, where it is believed the Virgin Mary lived in the last years of her life. The beer is named for the city.

One last thing. I could use anything American to put up in my classroom. If you have things like Disneyland brochures, American city posters, maps, menus, photos of national parks, etc., and can send them to me, I'll gladly reimburse you for the postage. My address is Tarsus American College c/o Michael Smith, Cengiz Topel Cad., Caminur Mah. No. 44 33440, Tarsus, Mersin, Turkey.

Some more pictures for you, 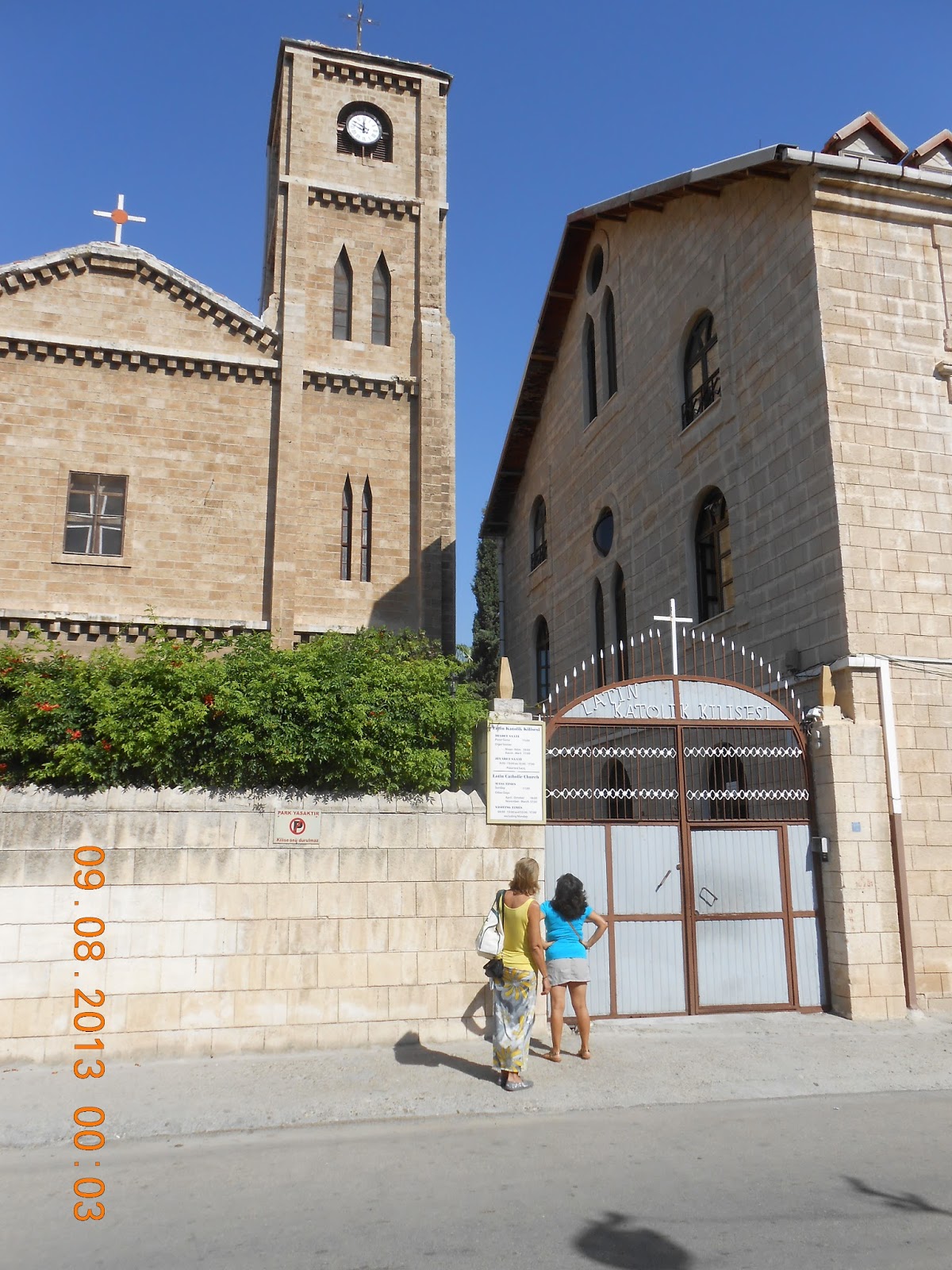 Christine and Theresa in front of the Catholic church in Mersin 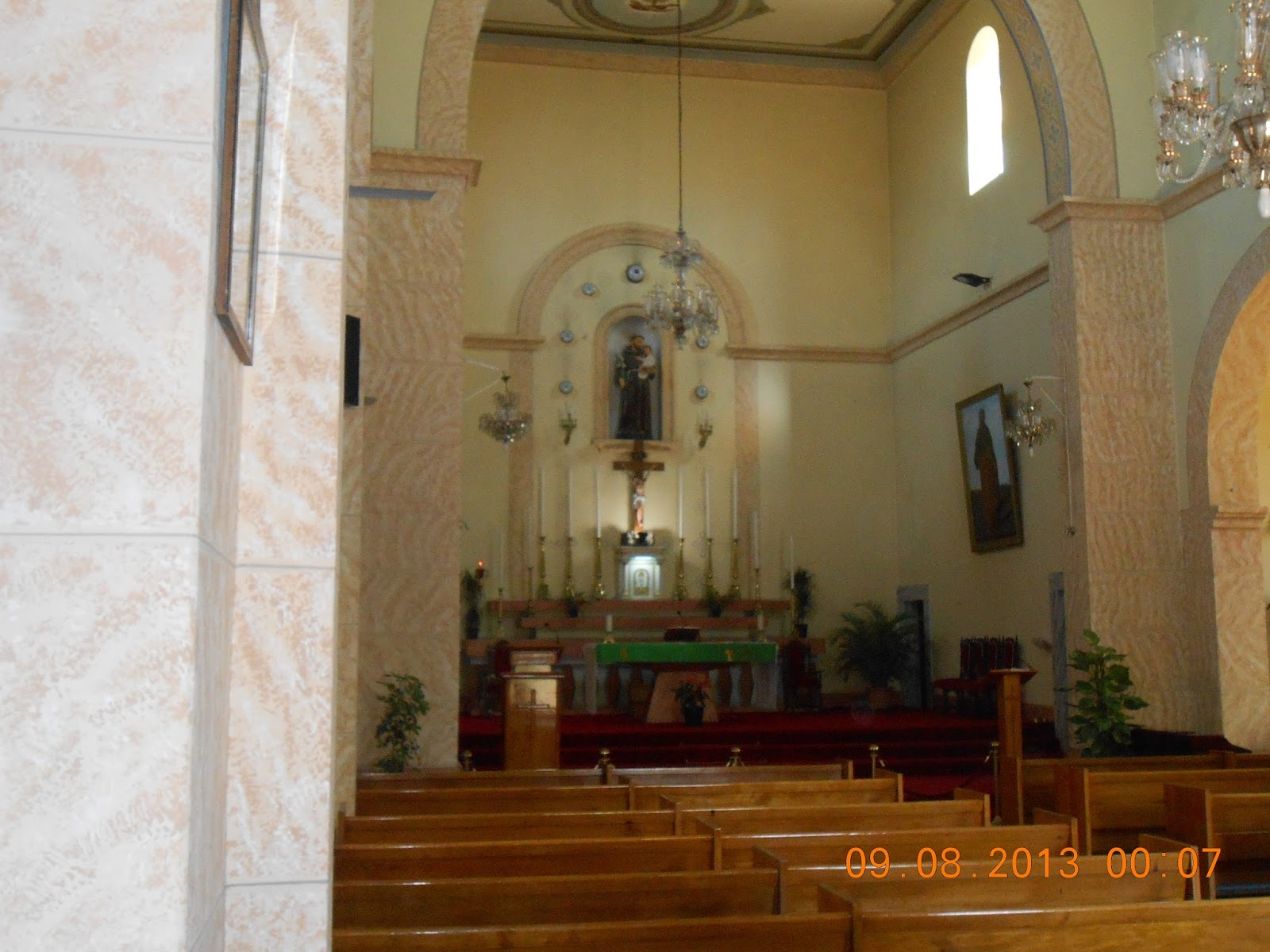 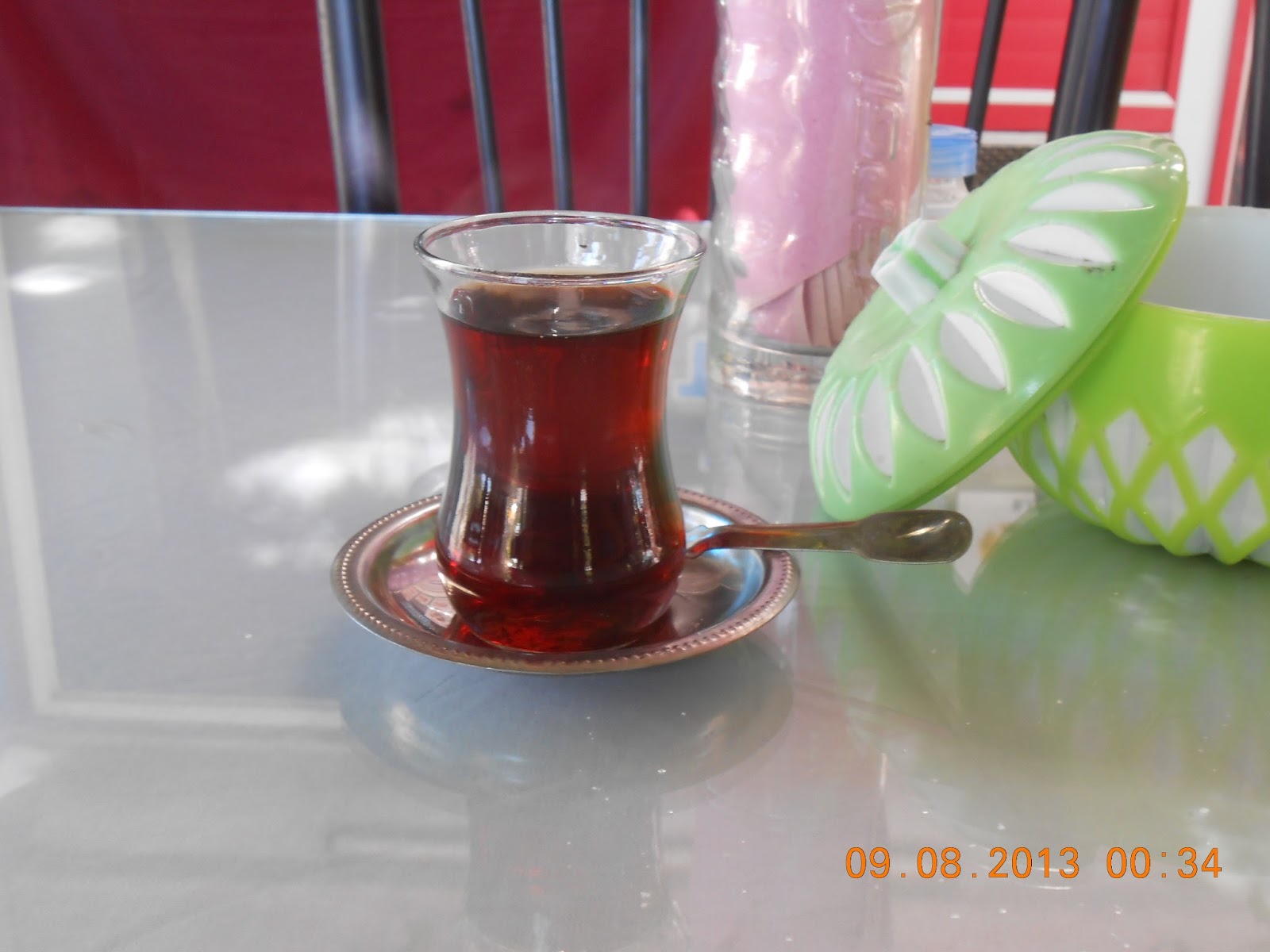 A cup of chai, one of the symbols of Turkey, in a tulip shaped glass. 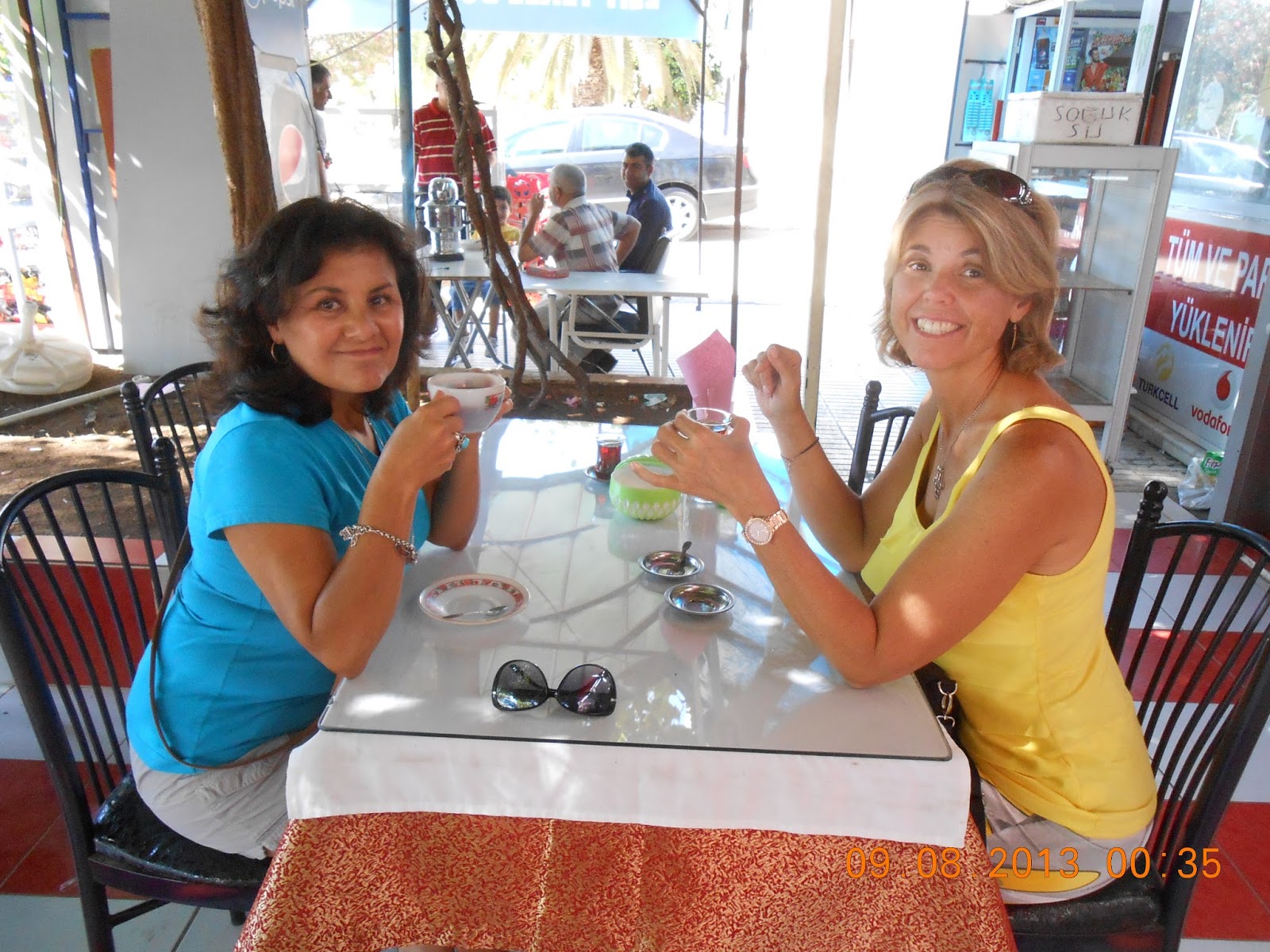 Christine and Theresa, a 6th grade teacher at our school. 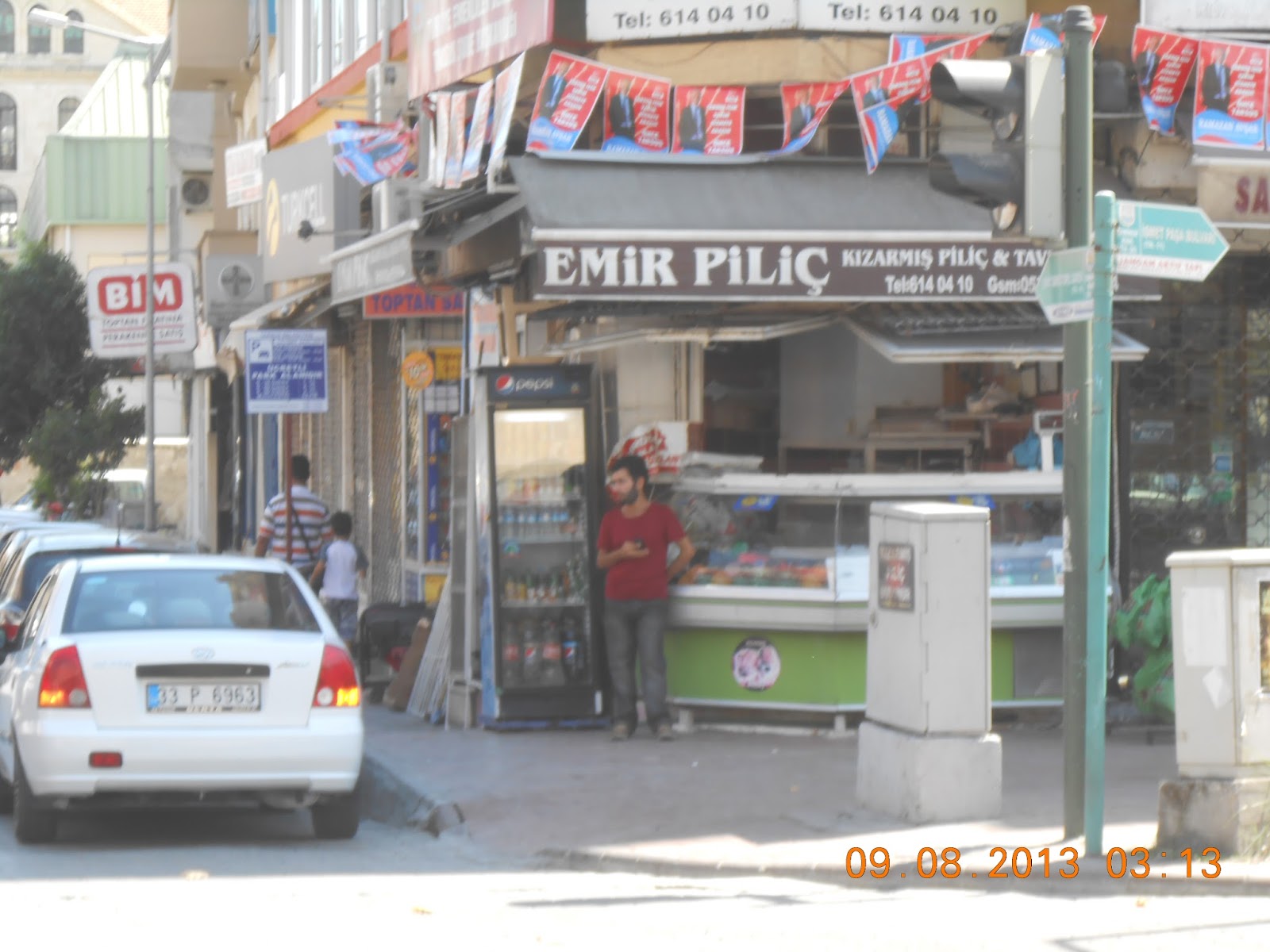 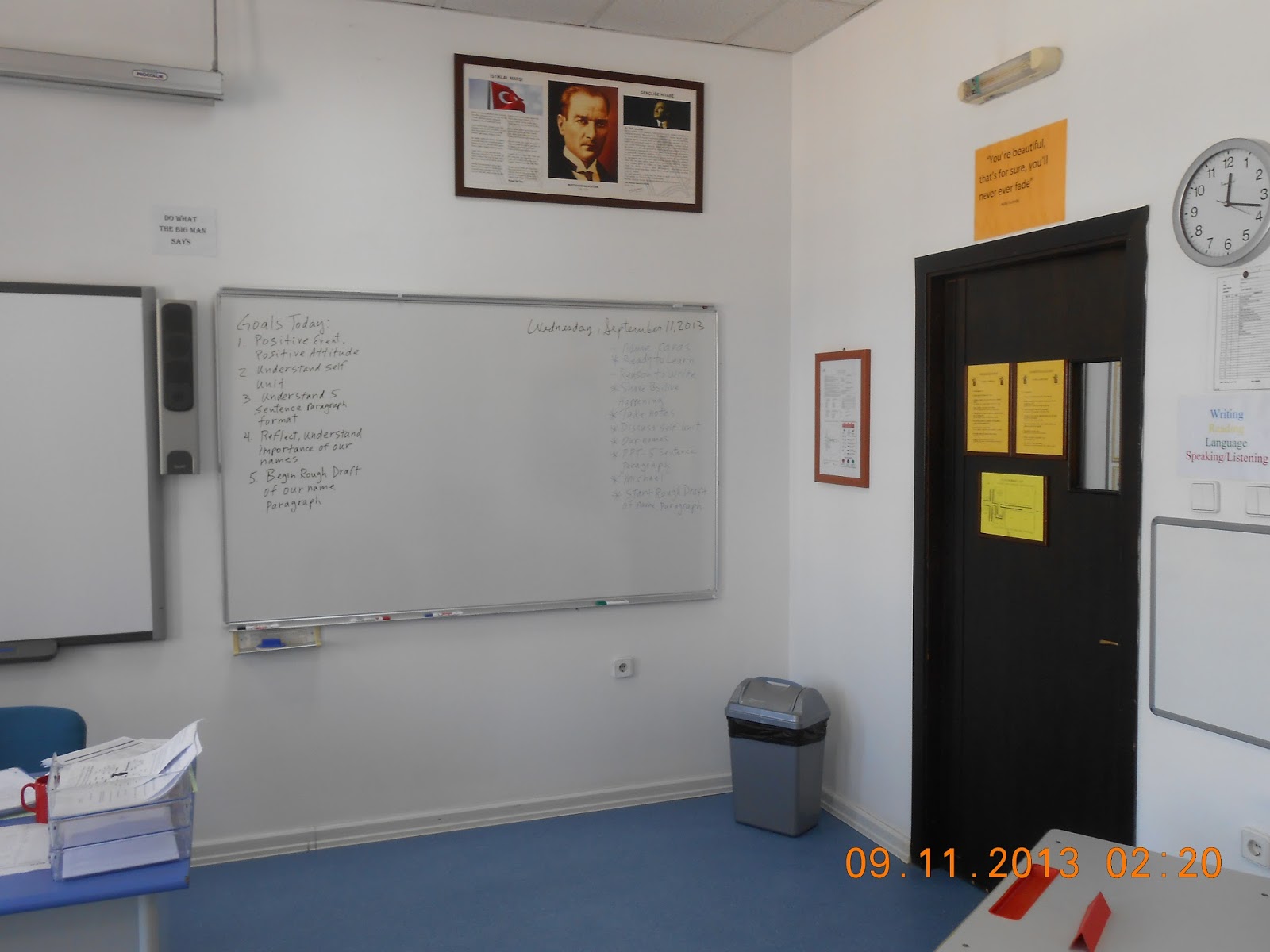 My classroom. The poster of Atatürk, the George Washington of Turkey, is required. 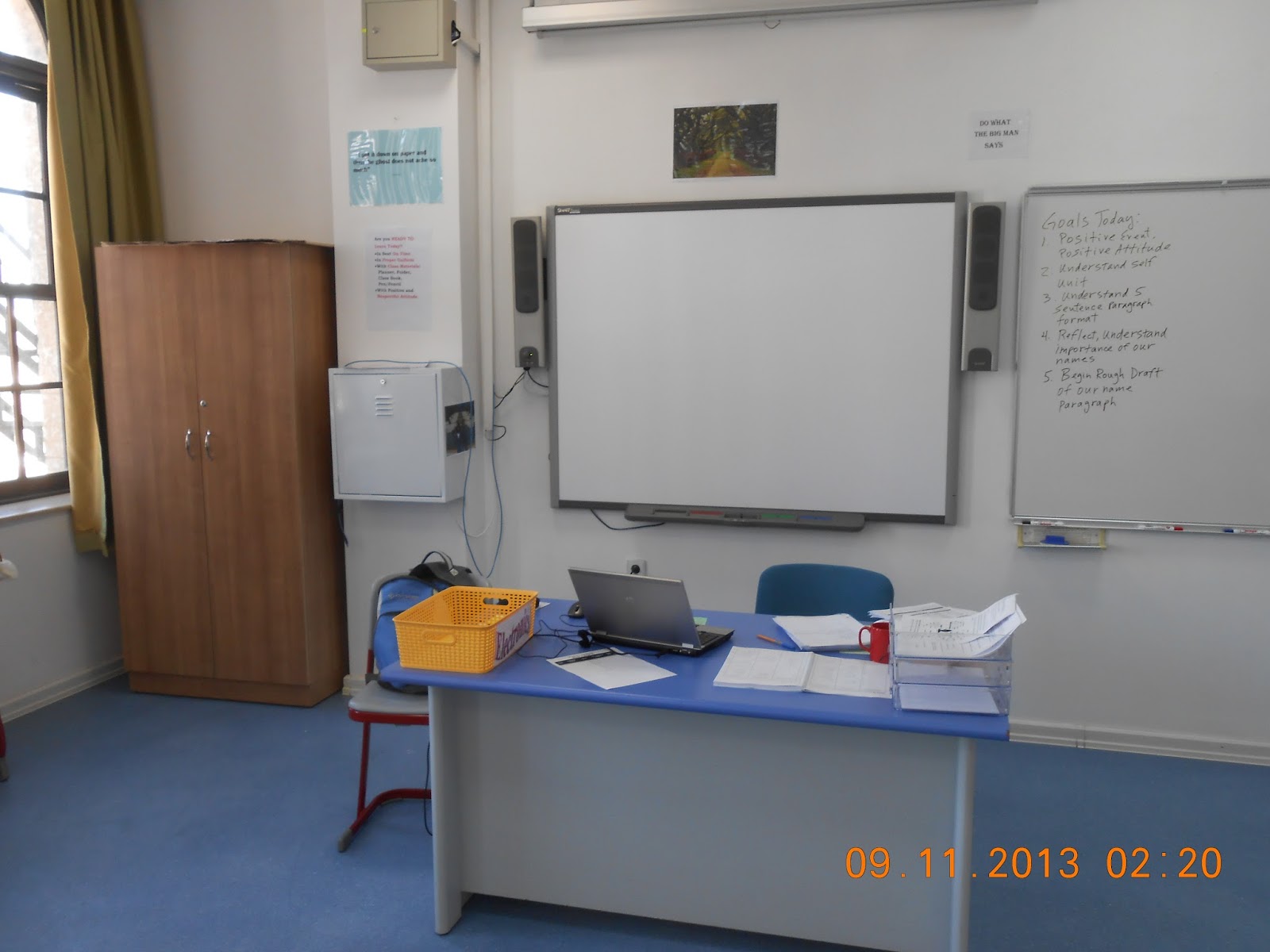 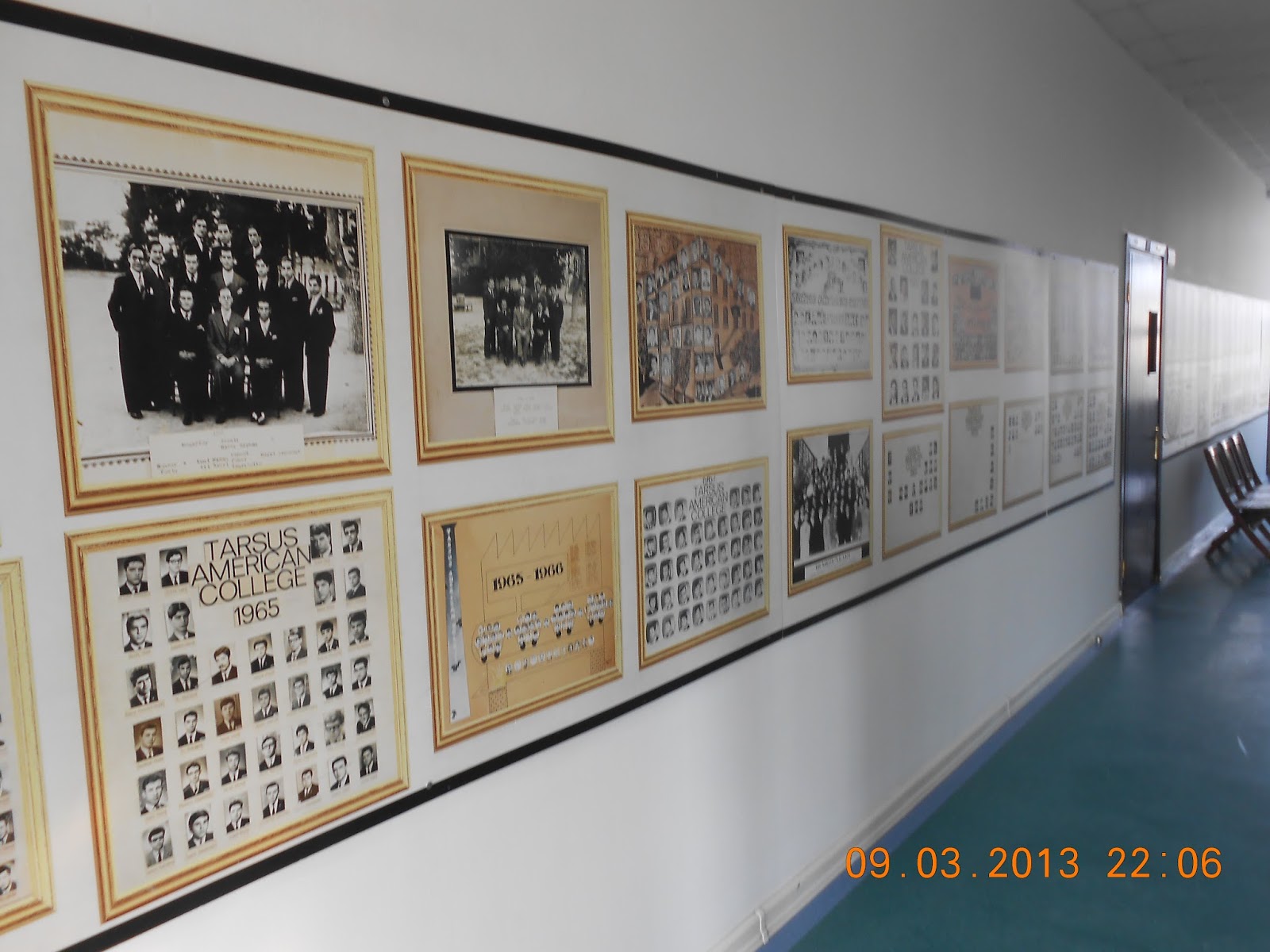 The hallway outside my door. 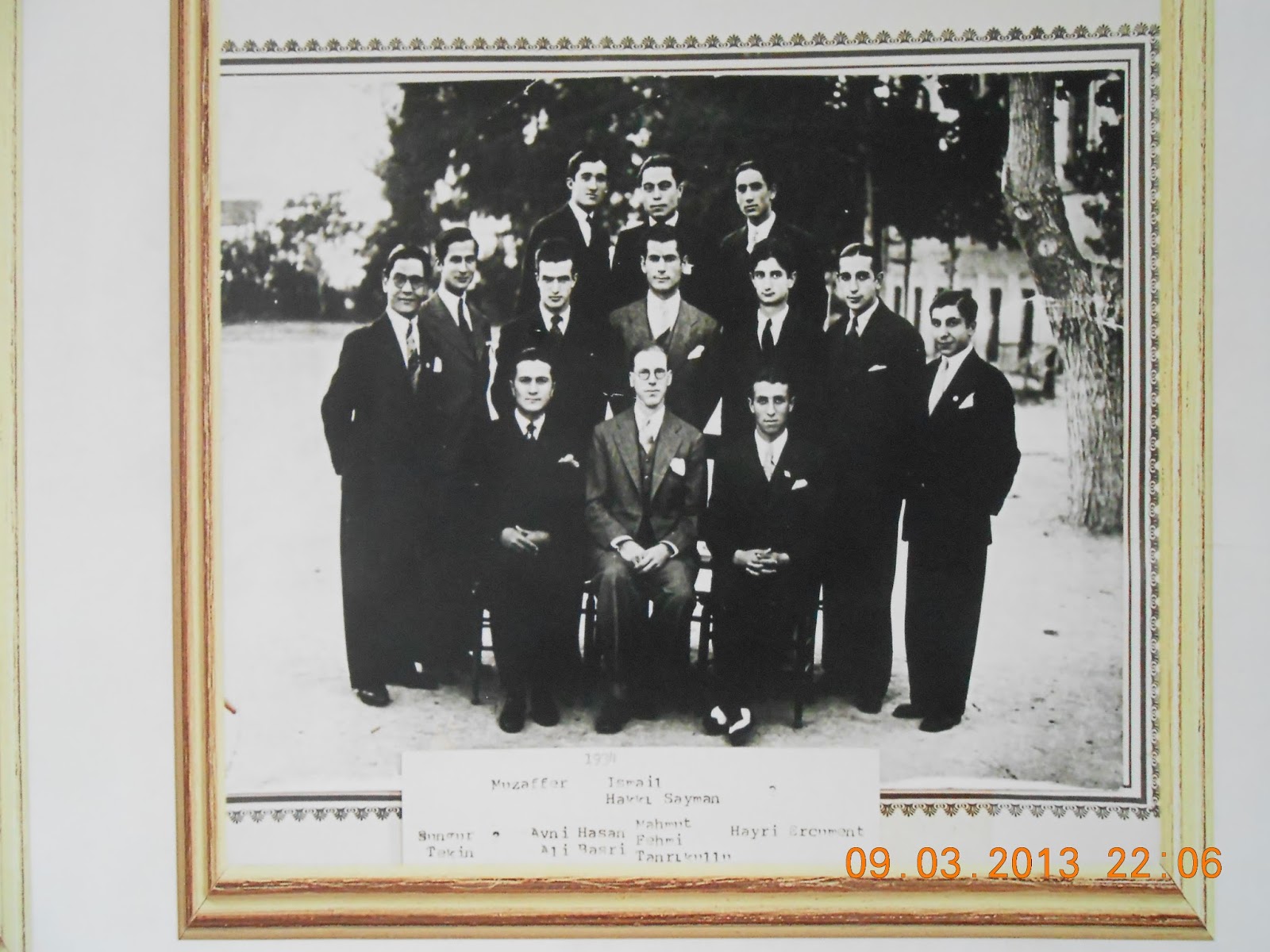 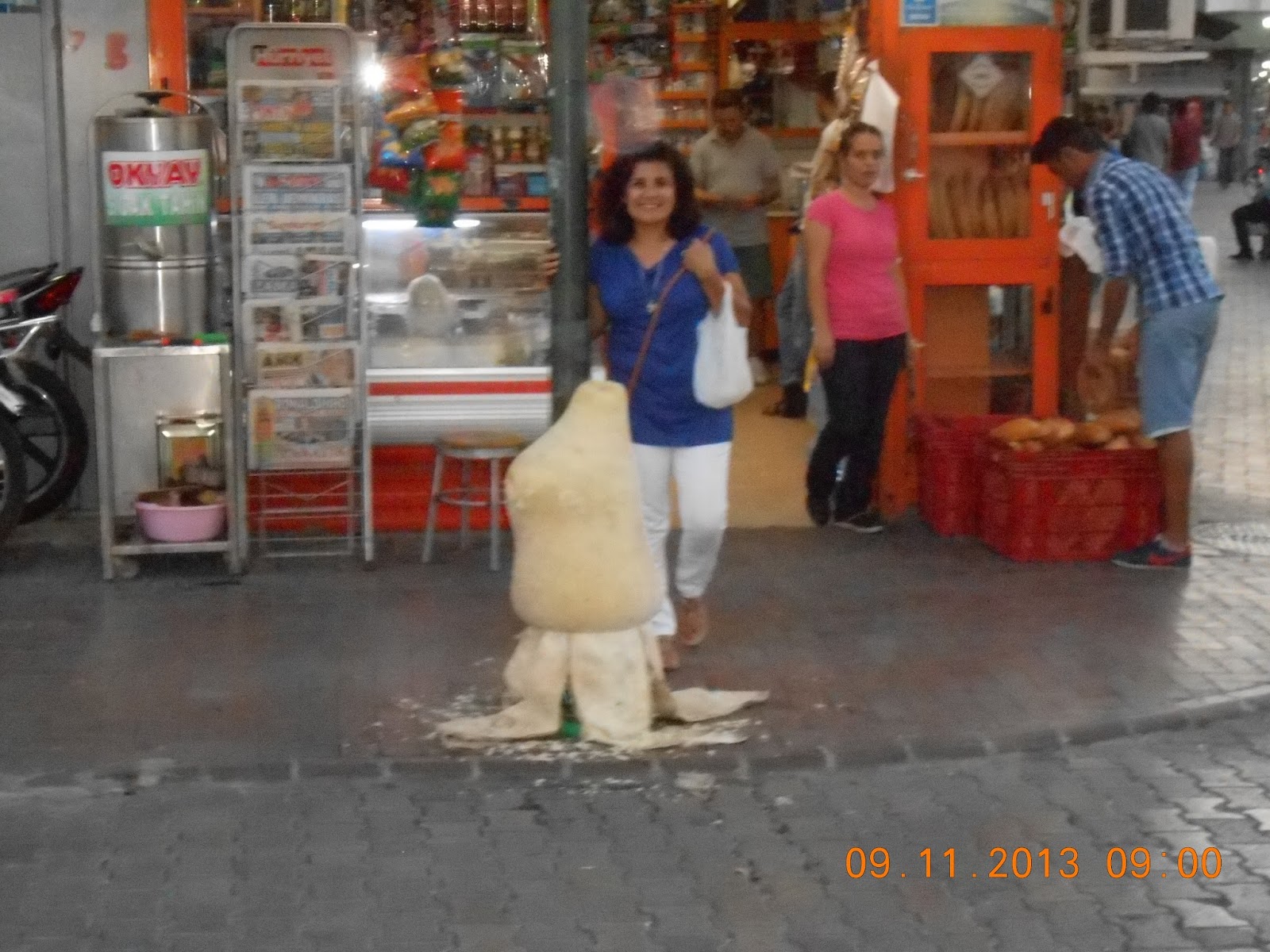 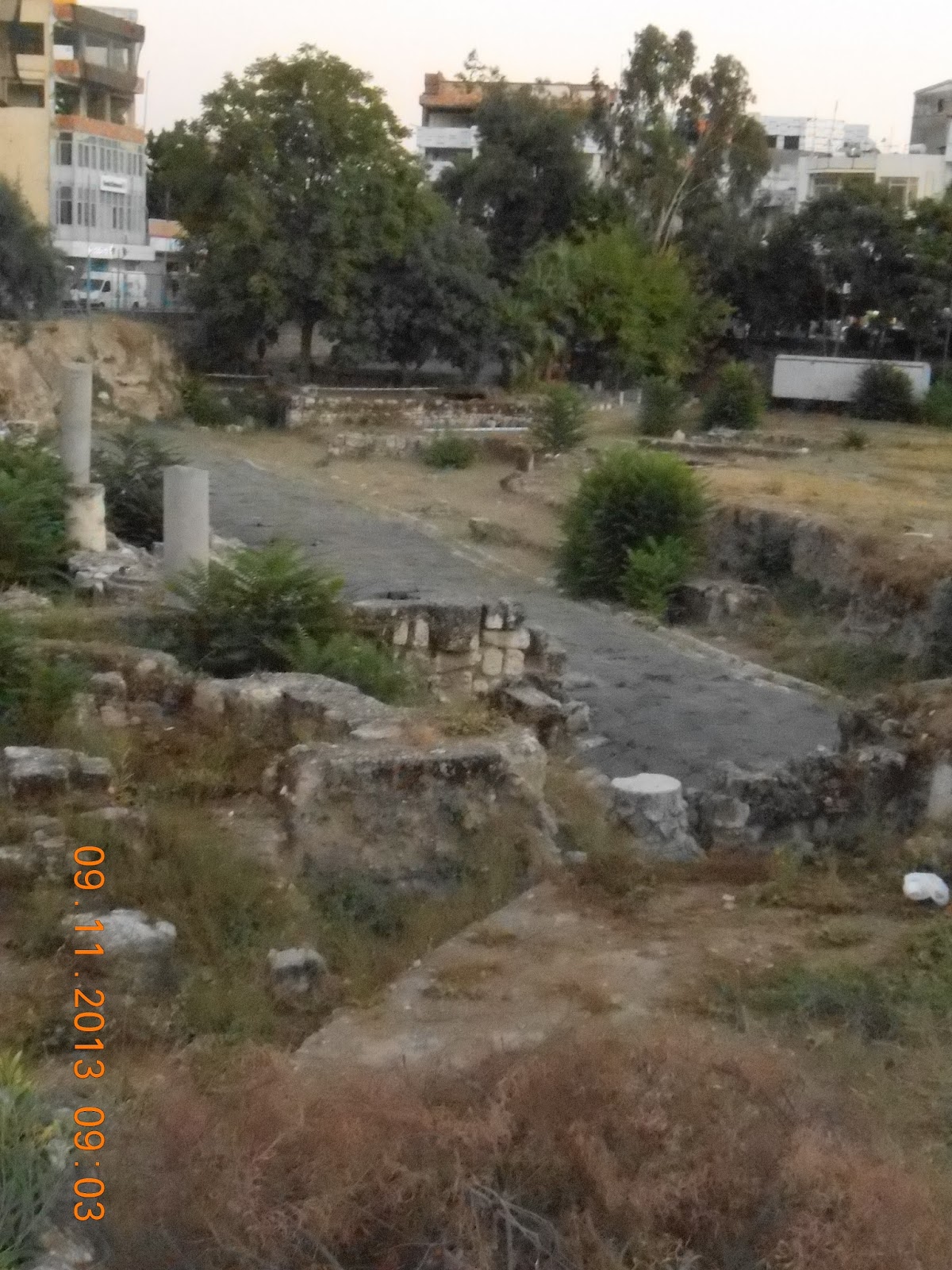 The Roman Road in Tarsus, for thousands of years the silk road between Asia and Europe. 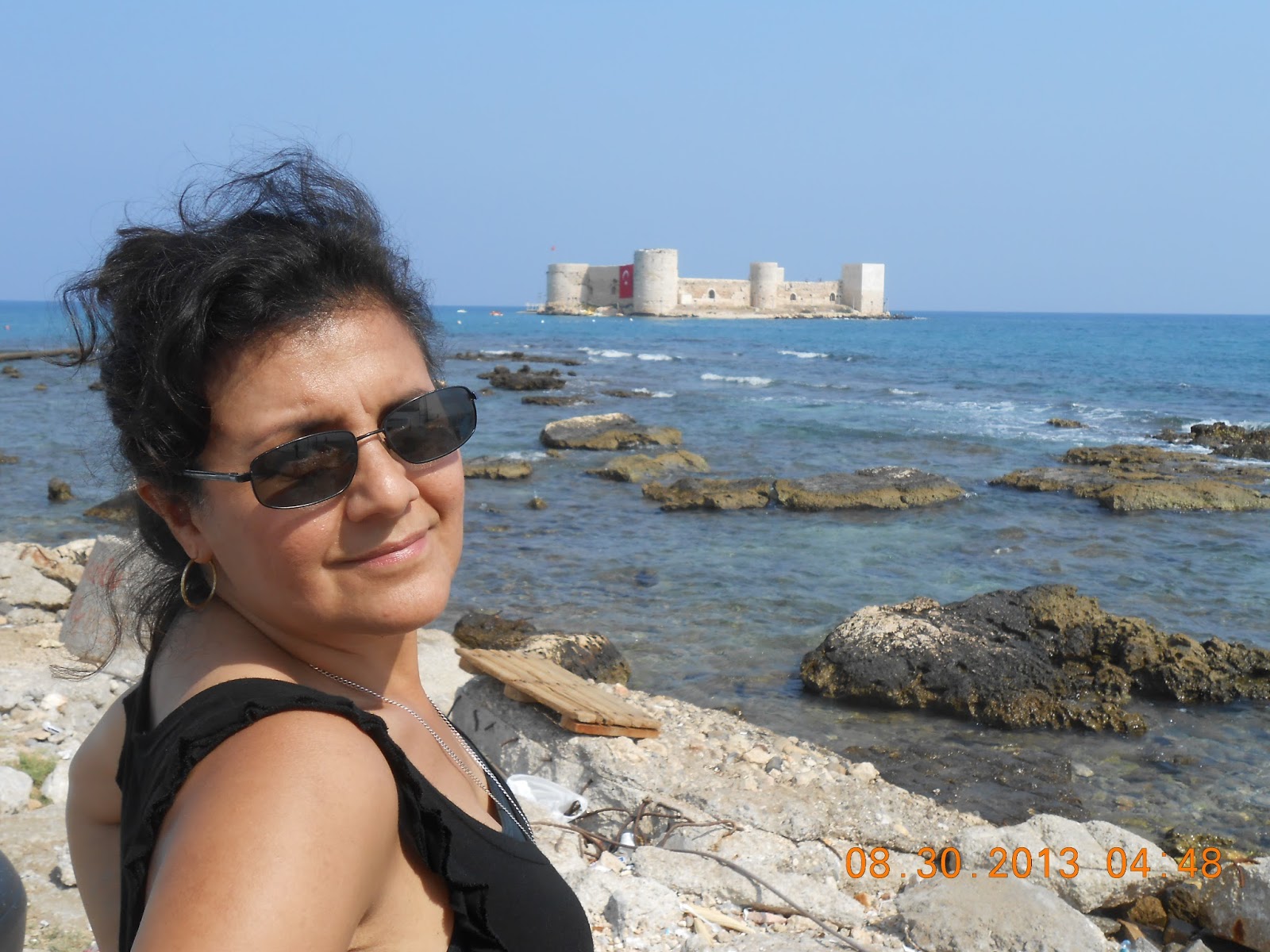 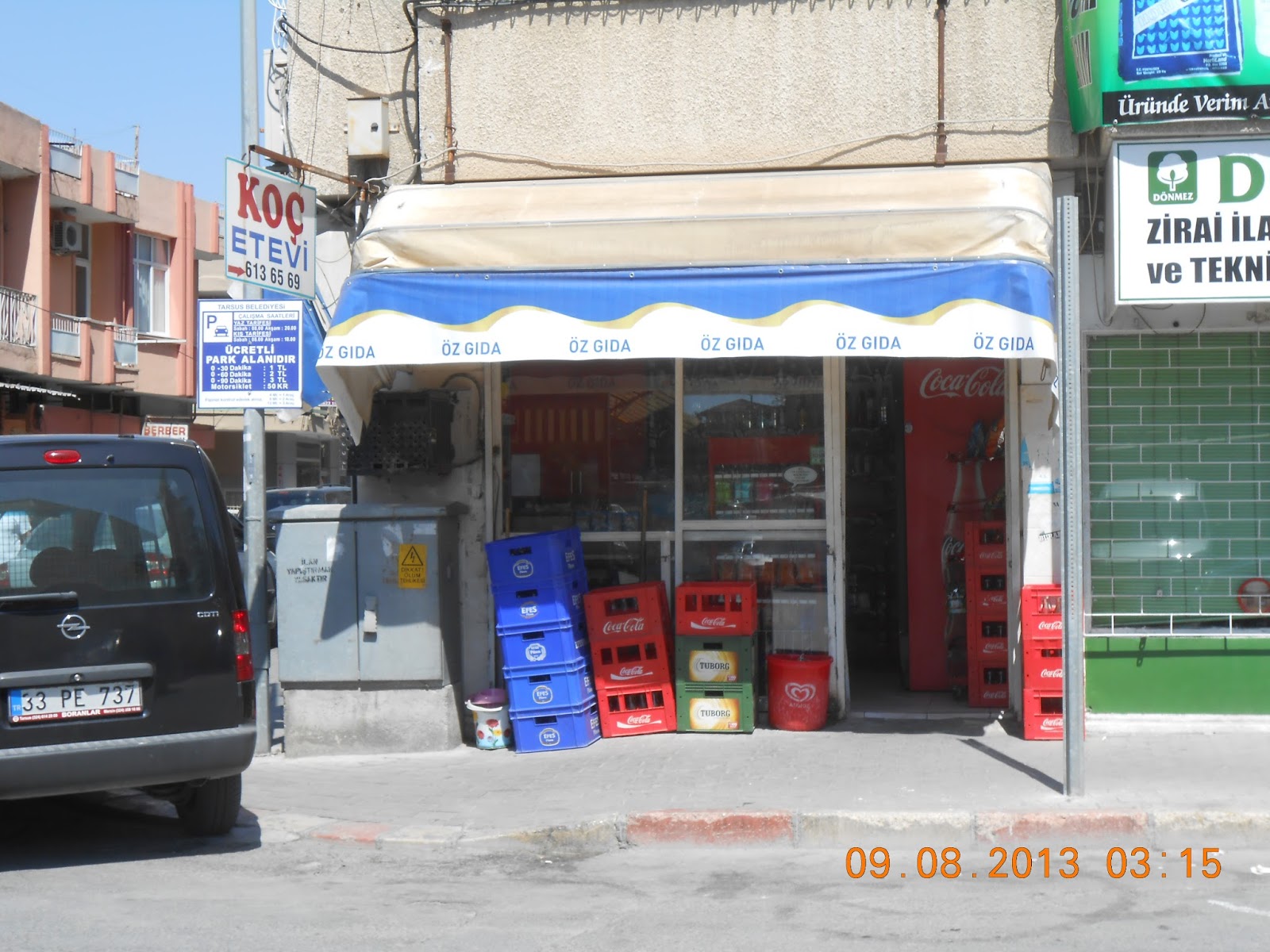