Good evening, folks at home. Here's a typical story about how things often go here in rural Turkey. The other evening I went out for a walk while Christine was doing her yoga workout with some of the ladies at school. I decided to find out exactly where the Tarsus bus station is for future reference. I knew the general direction and started out. As I walked through a pretty old neighborhood on the outskirts of this part of town, a guy on the street smiled and said hello in English and started walking next to me. (The people here can tell with just one look if you're not Turkish. I don't think it's the clothes so much. My students tell me it's got something to do with the skin texture that is instantly recognizable.) He asked me where I am from. He spoke just enough English to talk with me a little bit. And my Turkish consists of about thirty words, but he asked where I was going. When I said I was looking for the bus station - just to see where it is - he said he could show me because he often takes buses out of town for work. As we wound our way through a few more ancient streets, and now alongside open fields where sheep and cattle were grazing, a few adolescent boys in the streets looked me over. When I smiled and said "merhaba," they smiled too. Soon the guy walking with me indicated that he had to stop but pointed off into the distance toward some large brick buildings where he said the bus station would be. I said ok, thanks, and kept walking past the fields. In a few minutes one of the boys I'd just seen came riding up to me on his bycicle and seemed pretty panicked that I might not know where I was going. I'm sure the first guy had told him where I was headed. I told the boy I was fine, was just out for a walk, and no need to worry, with words and my best sign language. He continued to point toward the distance and seemed real worried. I think he wanted to ride along and show me where to go. As we talked there for a minute, a police car passed on the other side of the road, going in the direction I'd just come from.
Then the boy ran toward the car and flagged it down and I'm sure was telling them that I was lost and needed to get to the bus station right away. They turned around and two policemen got out of the car and opened the back door for me to get in. I was saying and indicating as best I could that everything was fine. I was just out for a walk. But they seemed worried for me too, so I got in the back where some of their groceries were stacked. As we drove off, the policeman in the passenger seat was asking me where I was from. He didn't really speak English, but I coud tell that's what he was asking. I said "America, California," as I always do. Then he got on the car phone and called someone. He kept turning back to me and smiling and saying into the phone "California" as he spoke to whoever on the other end. They drove me all the way to the bus station, a pretty good distance too. Both got out and shook my hand a few more times then drove off. So much for my evening stroll.
A lot has happened since I last wrote. Christine and I spent nine fantastic days in Rome over our semester break in February. It was bitter cold and rained the whole time. And we loved it - really romantic and no real crowds anywhere. Christine's mother and brother Raymond met us there and shared the experience with us. It was one of the happiest times of my life. What a beautiful city, the prettiest I think I've ever seen. We saw a lot of the famous sites but were able to get off into the side streets and out of the way places too. No matter where you are in Rome, everywhere you turn the scenery is perfect, whether it's the architecture of ancient buildings and monuments or the smallest neighborhood streets and sidewalk cafes, it could be right out of a painting.
All right, I need to shorten up these long-winded passages so you might keep reading. So here are a few more "Notes on a Turkish Train Pass":

Things are warming up nicely here, and our apartment is surrounded by orange trees. They're blooming now, and the smell of fresh orange blossoms engulfs us whenever we are home.

Last Sunday was election day here in Turkey. All across the country, municipal elections were held. But the elections were seen as more than that. They were considered a referendum on Turkey's very conservative prime minister Erdoğan and his party who have been on the hot seat here since last summer's uprisings in Istanbul's Gezi Park and their handling of them. There are several parties here, and each had candidates in every town. The days leading up got wilder and louder. Every evening candidates' supporters were in the streets waving banners. And each candidate had people driving cars, vans, and buses through the streets blaring the Turkish music that represents his party. It got to be quite a sight - and sound - every night. Daytimes too. Sometimes I had to wait in class for the music from passing cars to die down.

There are no real rules for drivers here or for pedestrians either. Cars basically have the right of way and don't slow down for anyone on the streets. Pedestrians weave their way through traffic and don't wait at all for any lights to change or cars to stop. When there's an opening between moving cars, you go for it. And it really gets tough at night because not all cars have their lights on. There are also many electric scooters out there. It's really hard to spot them when they zip past you in silence and with their lights off.

A few weeks ago we went with a few other teachers to the coastal town of Silifke, about two hours from Tarsus. We climbed on an ancient castle from the Byzantine and Roman eras. We also explored ruins more than two thousand years old in the hills above town. I'll show you some pictures in a few minutes.

Christine is volunteering almost every day now in the fourth grade class and loves it. She is reading with them, giving them one on one tests, etc.

I think the hardest thing for her this year is that she couldn't watch the Academy Awards, her favorite annual event. Each year, she gets all dressed up, hair and nails done, champagne on ice. The Works. In fact, I think she believes she's actually in the Academy Awards. Anyway, we were able to see them a couple of nights later with a teacher who had found the show online, but it wasn't quite as thrilling for her.

As you may have heard, the prime minister and the government have turned off both Twitter and Youtube in Turkey. That's no joke. The rumor is that Facebook is next. Interesting time to be here.

One of the things I really enjoy is this. Sometimes I'll ask my students how to say or ask for something in Turkish. A food of some kind for instance. They really want to be helpful, so one of them will tell me what to say. But then another student will offer a slightly different and better way to say it. The next thing I know I have about ten students all arguing with eachother and shouting about how I should ask for this thing to eat. I have to break it up after a while so we can get back to work.

And how about that Camarillo High girls basketball team! CIF Finalists this year and the best team we've ever had. It was a lot of fun following their accomplishments.

And ACHS has a swimming pool! We found video online of the opening ceremony with old Glenn Lipman and Tom Ito jumping in with their clothes on. Man I wish I could have been there.

We now have two beautiful grandsons, Mason and William. We are just in love with them and talk about them and look at their pictures constantly. But Christine keeps getting confused and referring to one or the other as "Wilson."

Everything regarding schools is governed by the Turkish Ministry of Education. And they have an interesting way of managing the school calendar. Every few weeks they will decide to cancel school for a day or have a few half days for whatever reason. But they often hold off on letting the schools know for sure until right beforehand. For instance, we had no school last monday, the day after the elections. But that wasn't confirmed until about a week before. And teachers weren't told until Friday that they had a half day of meetings the coming Monday. A little hard to plan your days off like that.

Tuesday evenings we often go see a movie at a local art house (Sanatevi) in the old part of town. A guy and his wife run the studio and cafe, and he does some photography for the school too. A nice group of American and Turkish friends gather there for a bite and a beer and a movie shown on the old back wall of the restaurant. The movie is usually a foreign film or Turkish one with English subtitles. They've shown some pretty good films. We really enjoy it. It's the closest thing to the Paseo Theater we've found.

Ok, that's about it. It is Thursday night, 3 April. Tomorrow we start our spring break, and Christine and I are flying to Munich, Germany for the week. This is one of the best parts about teaching in this part of the world, the chance to visit places we normally would never get a chance to see. Take good care, and we'll tell you all about it when we get back. Here are some more recent photos of our life and adventures: 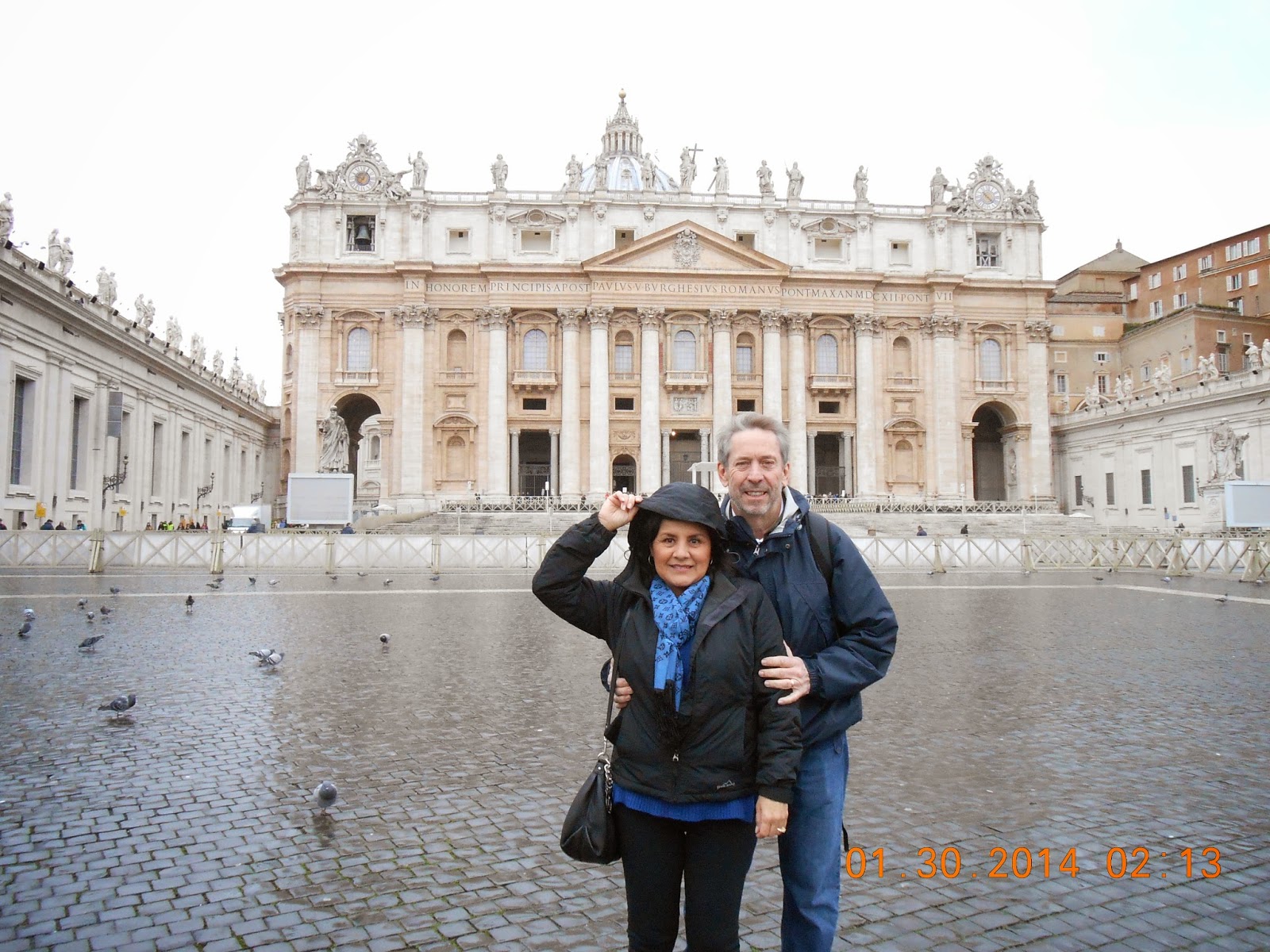 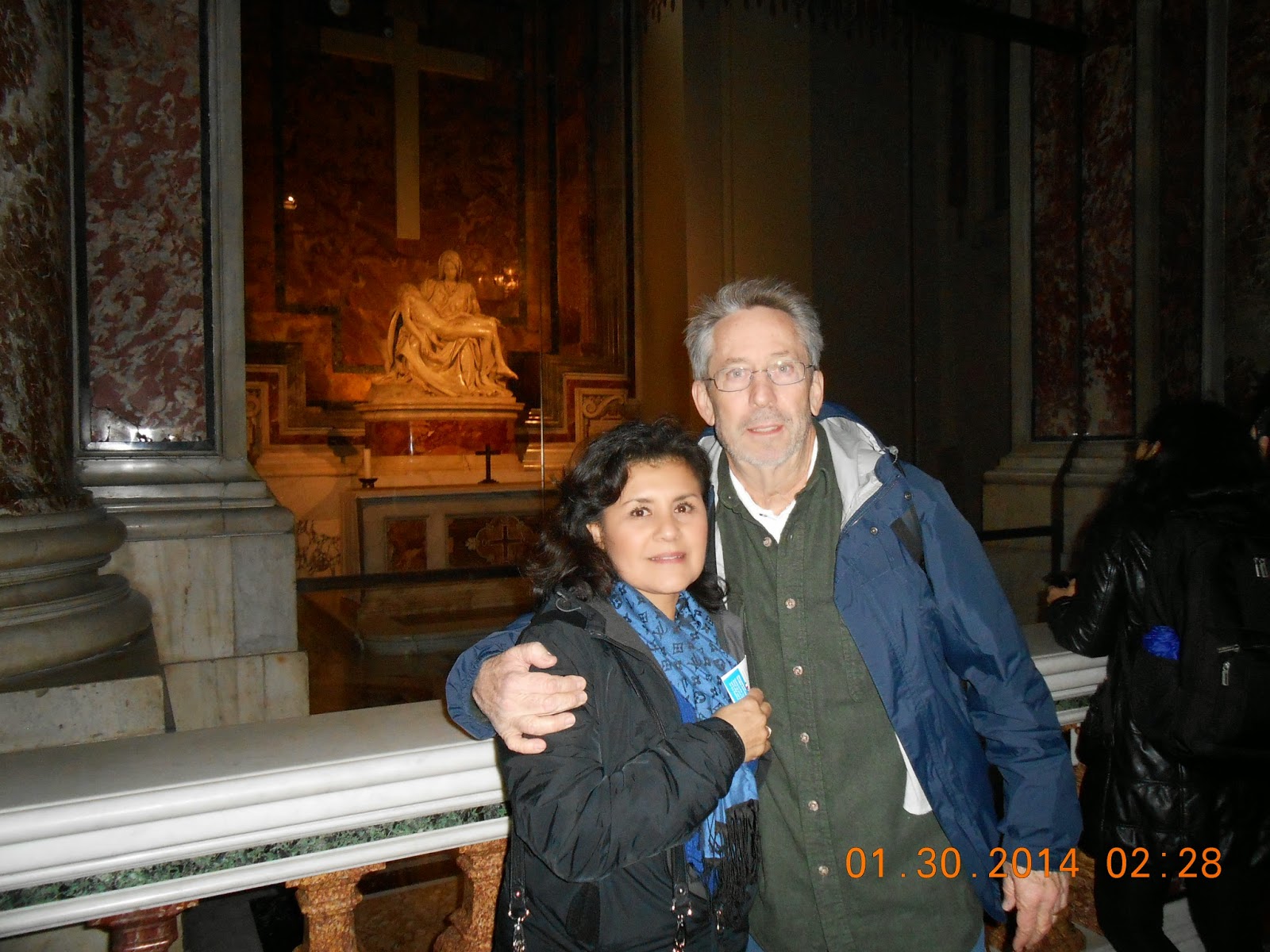 Inside the Basilica with Michelangelo's La Pieta in the background.
You can look at it for hours, and it will still take your breath away. 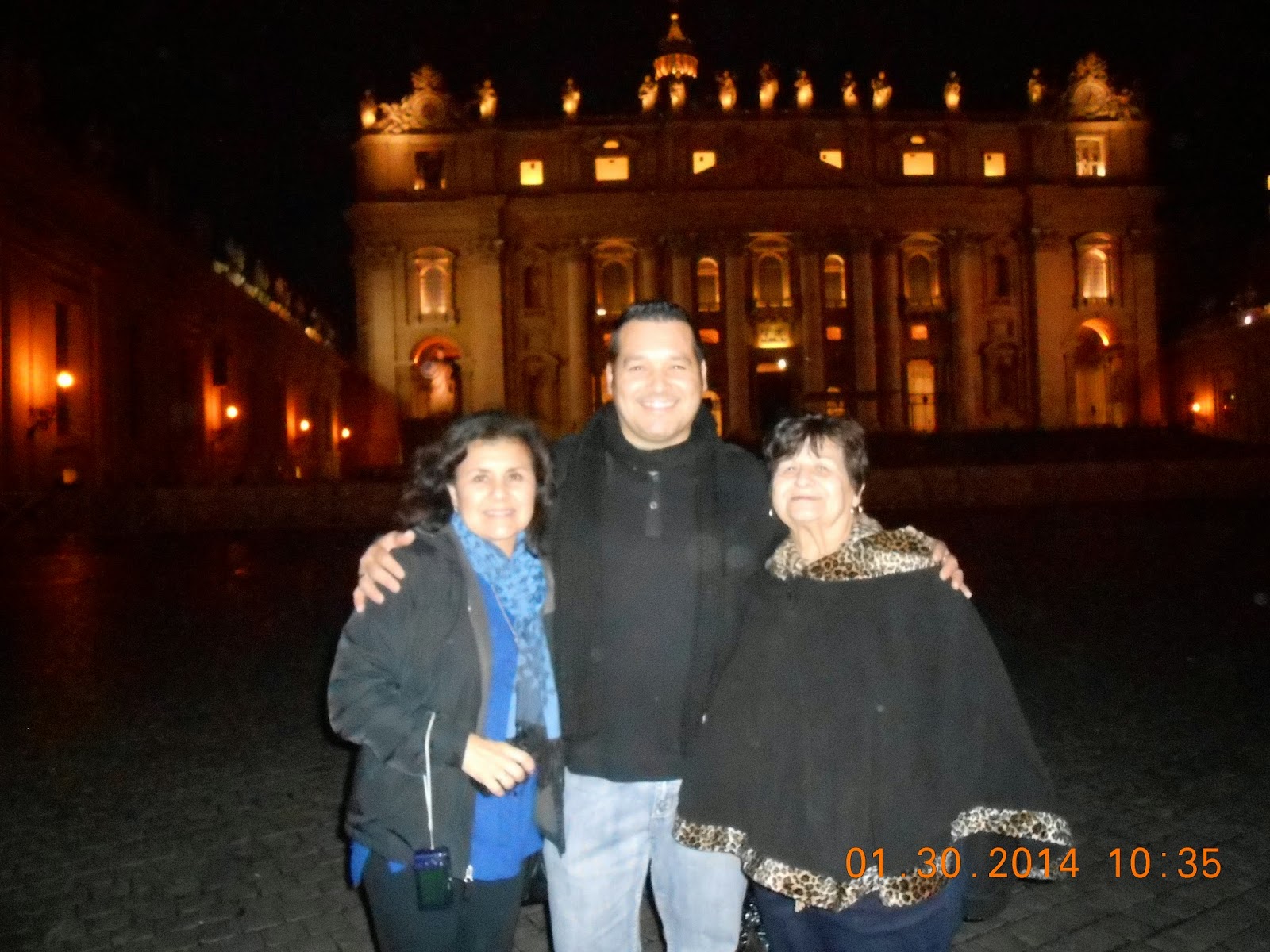 Christine, Raymond, and Virginia in front of the Basilica at night. 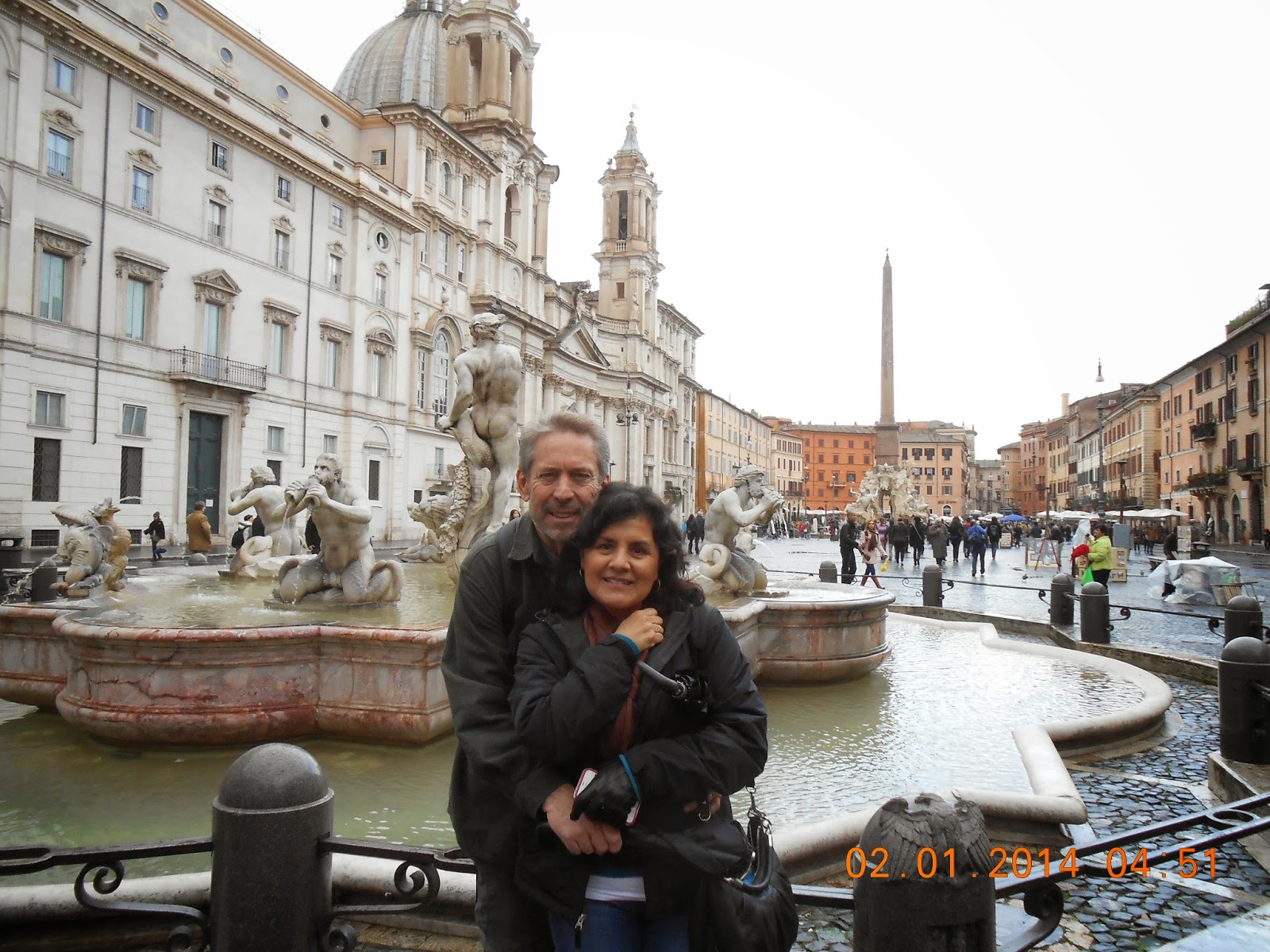 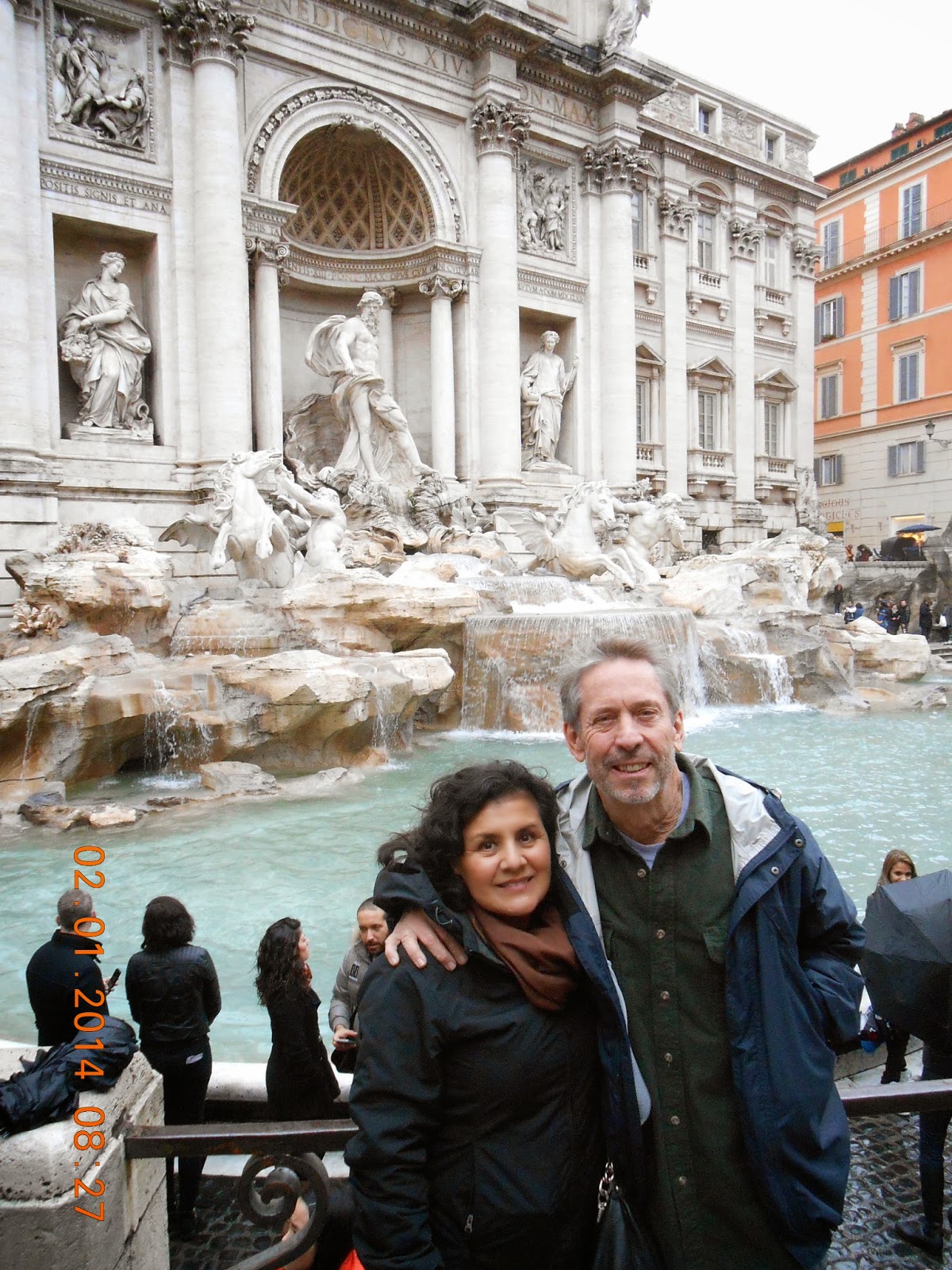 And of course, Trevi Fountain 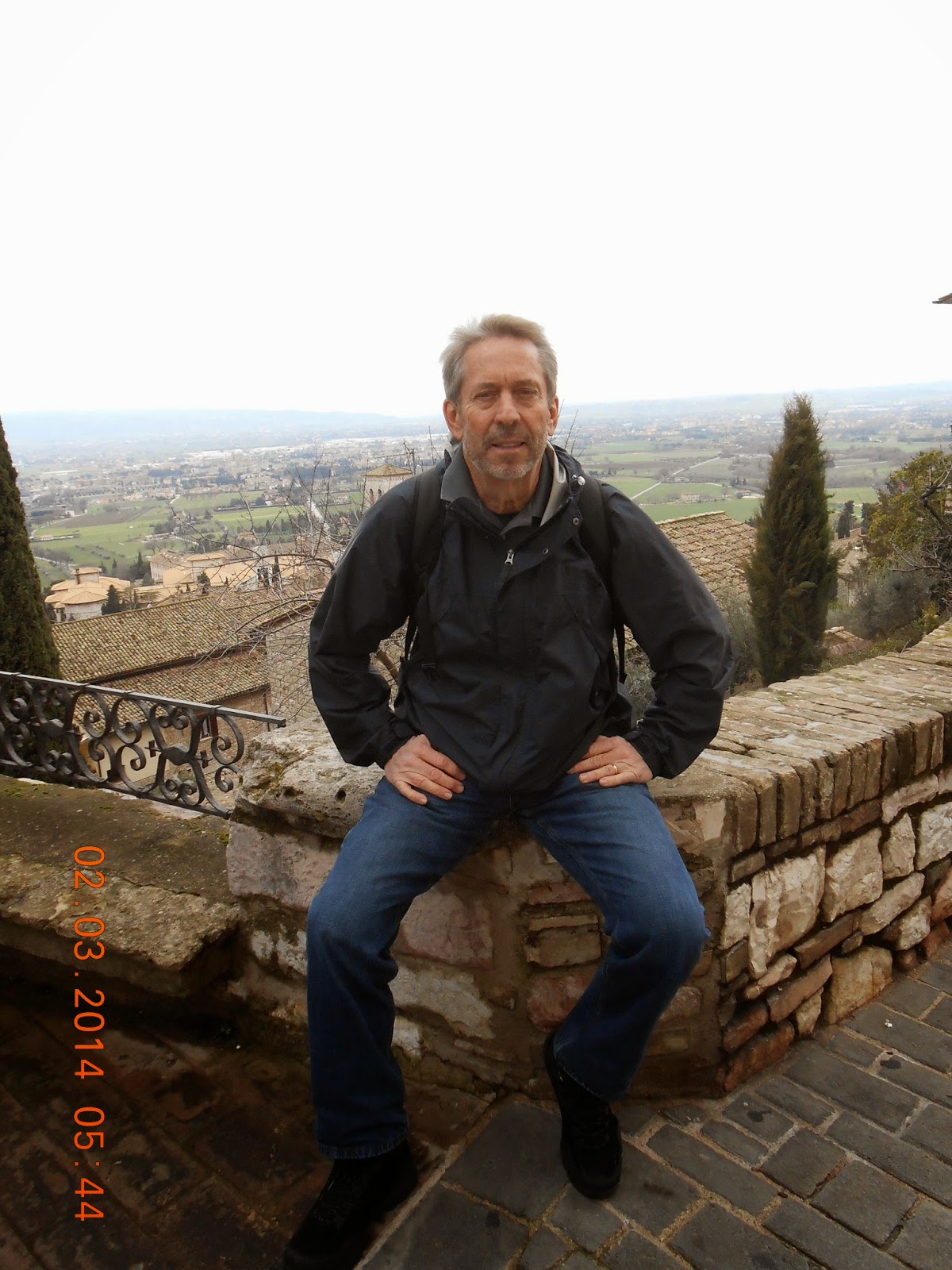 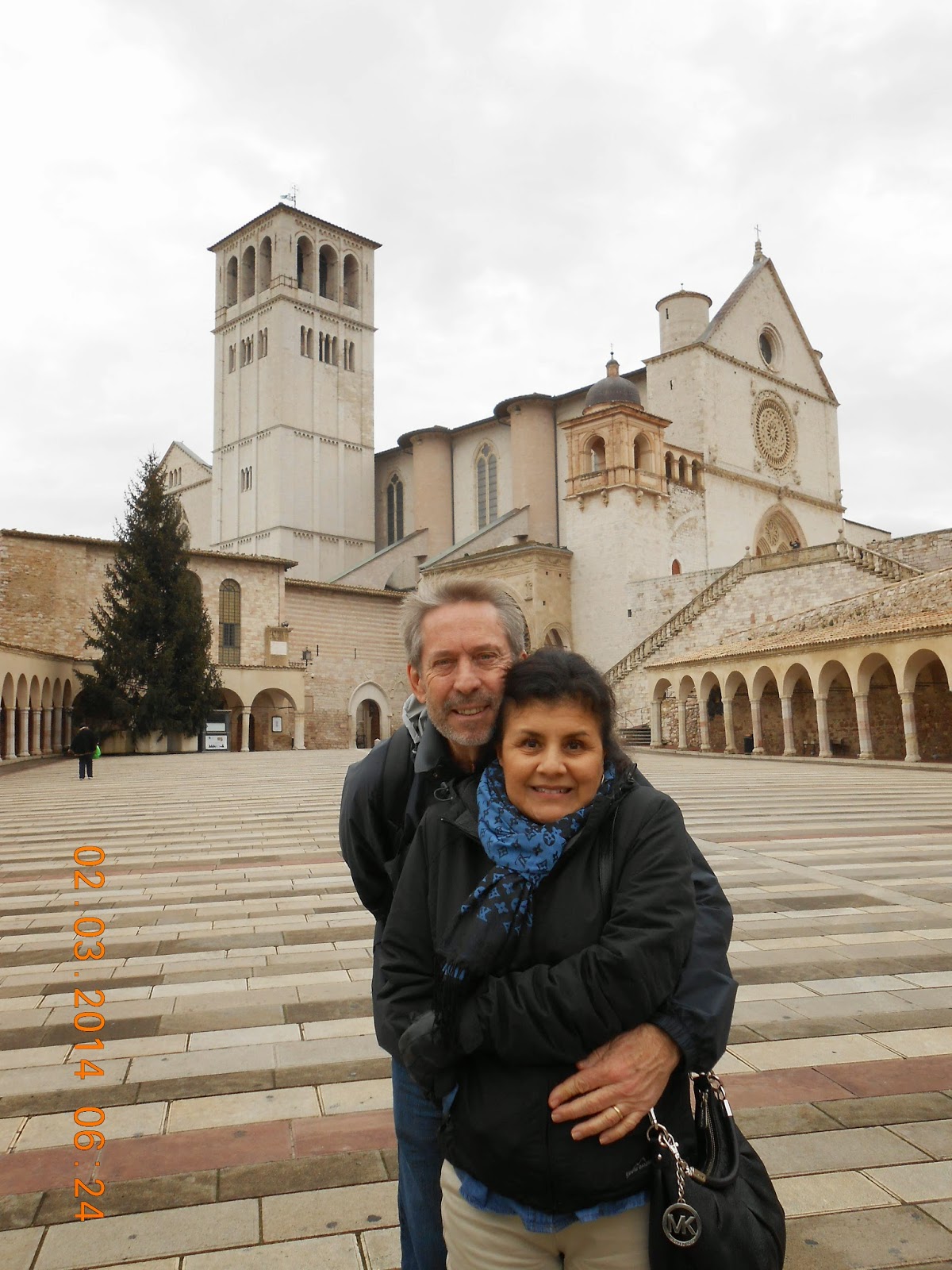 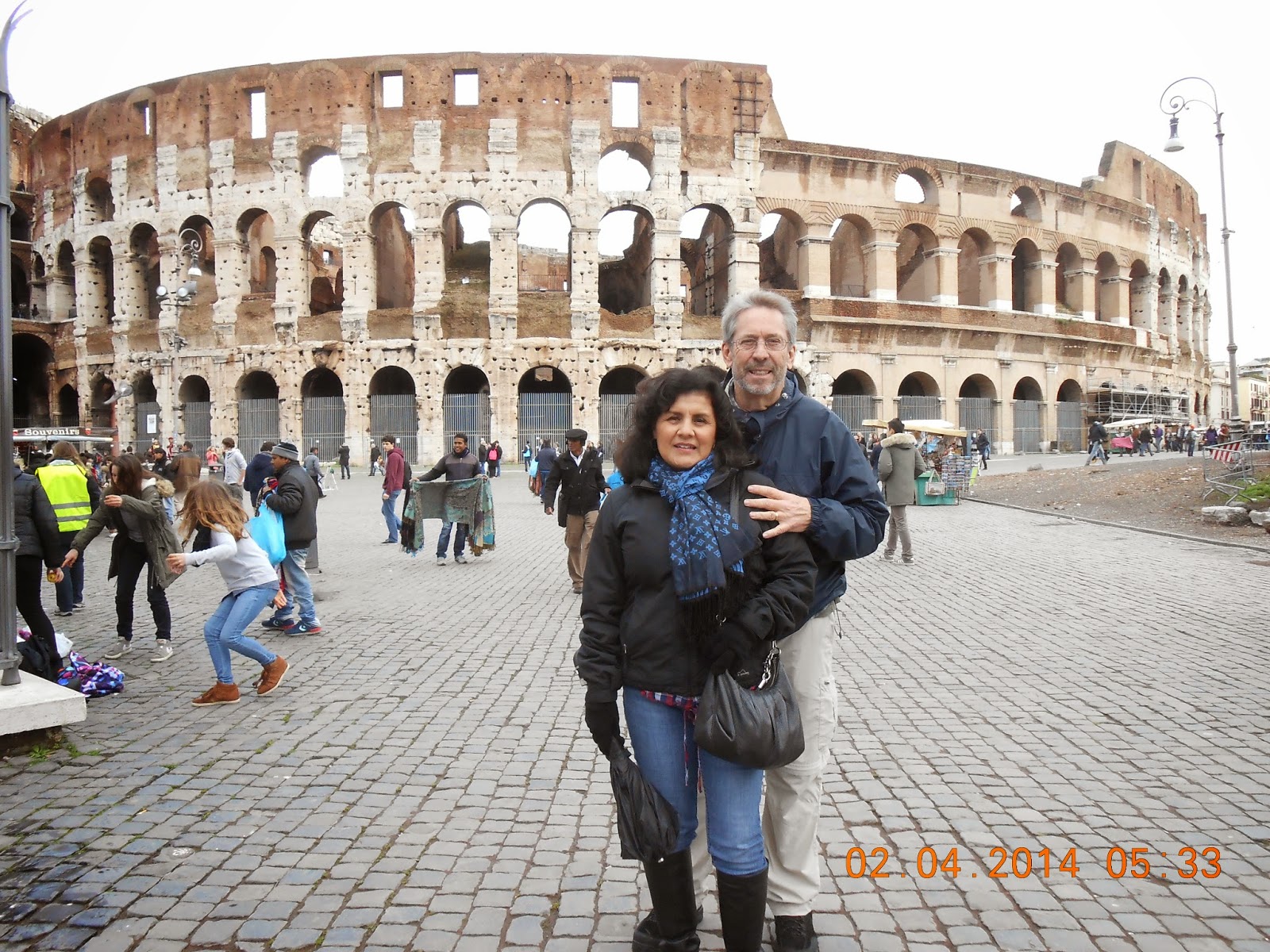 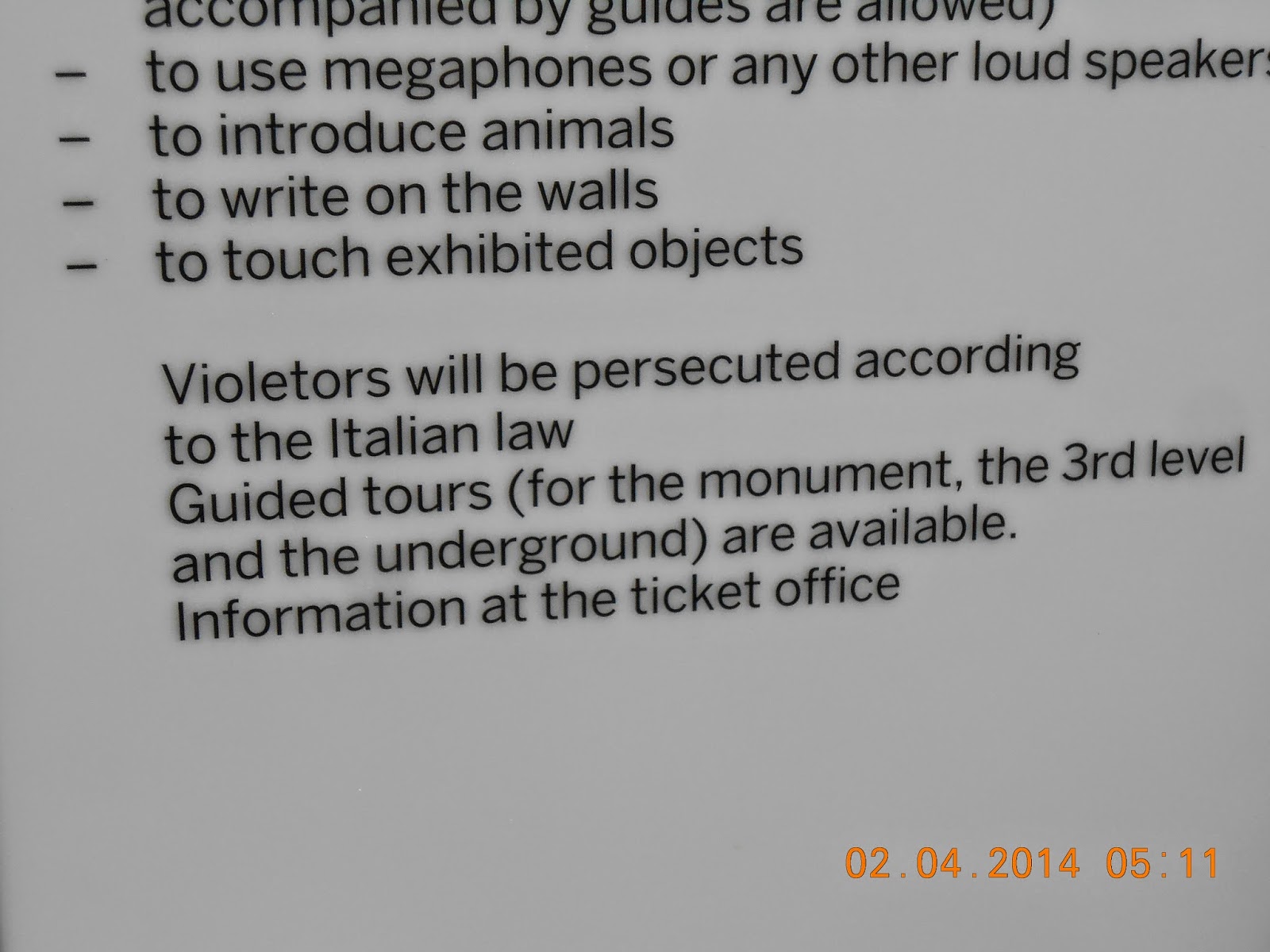 Don't mess around inside the Coliseum. Look what they do if you violate the law. 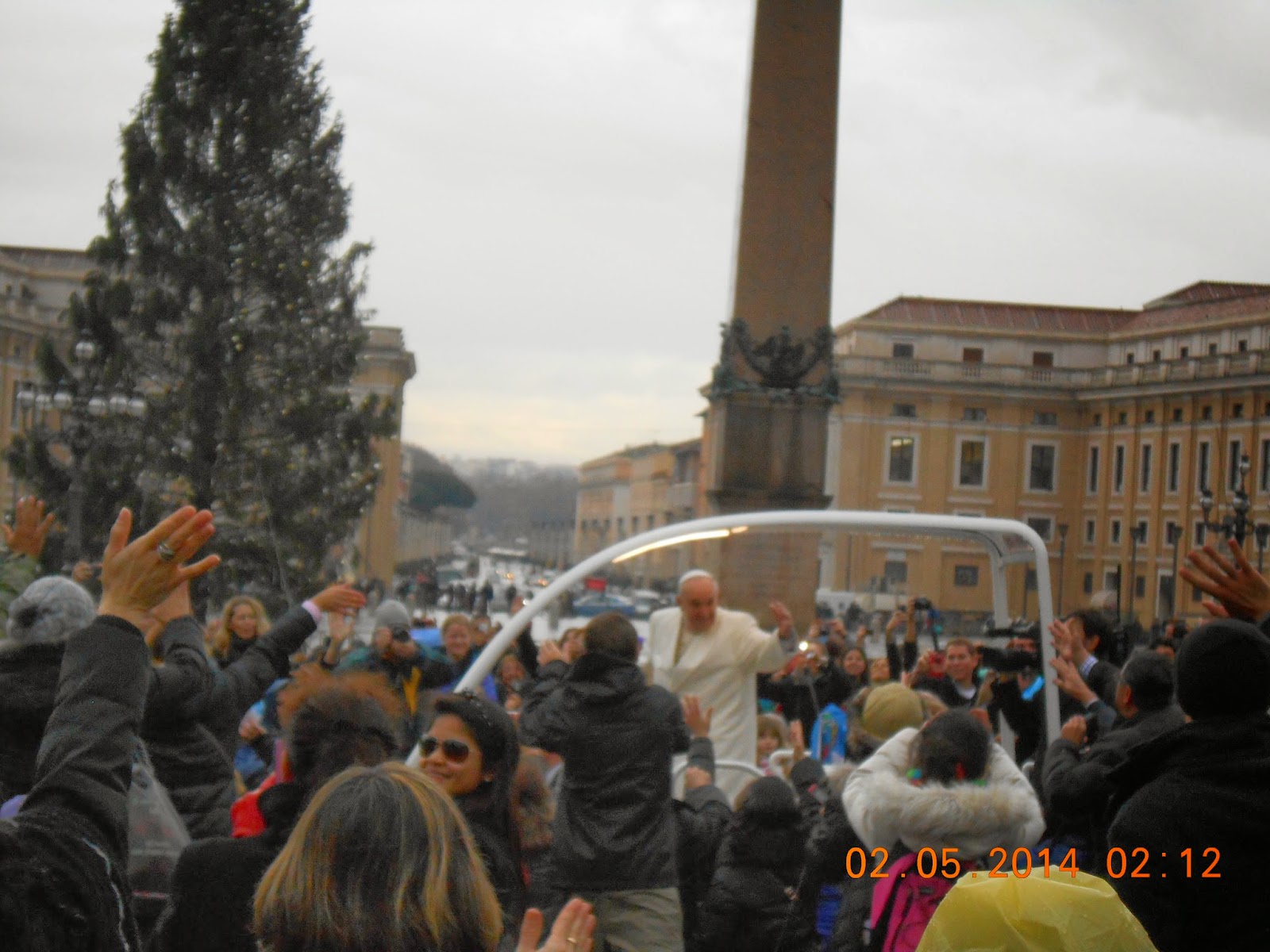 Guess who we bumped into in St. Peter's Square, Papa Francoise. 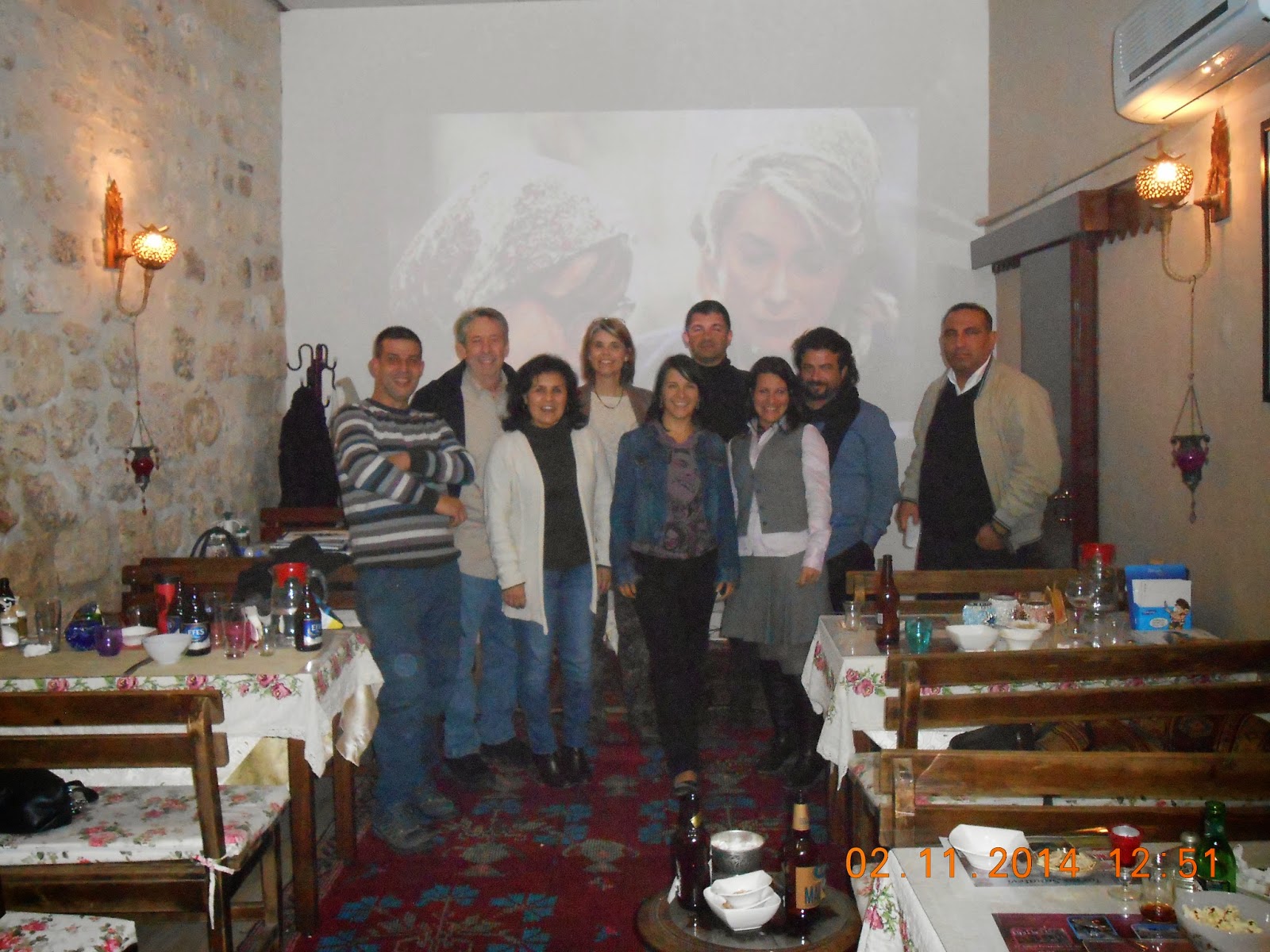 Movie night at Sanatevi in Old Tarsus. That's the screen behind us. 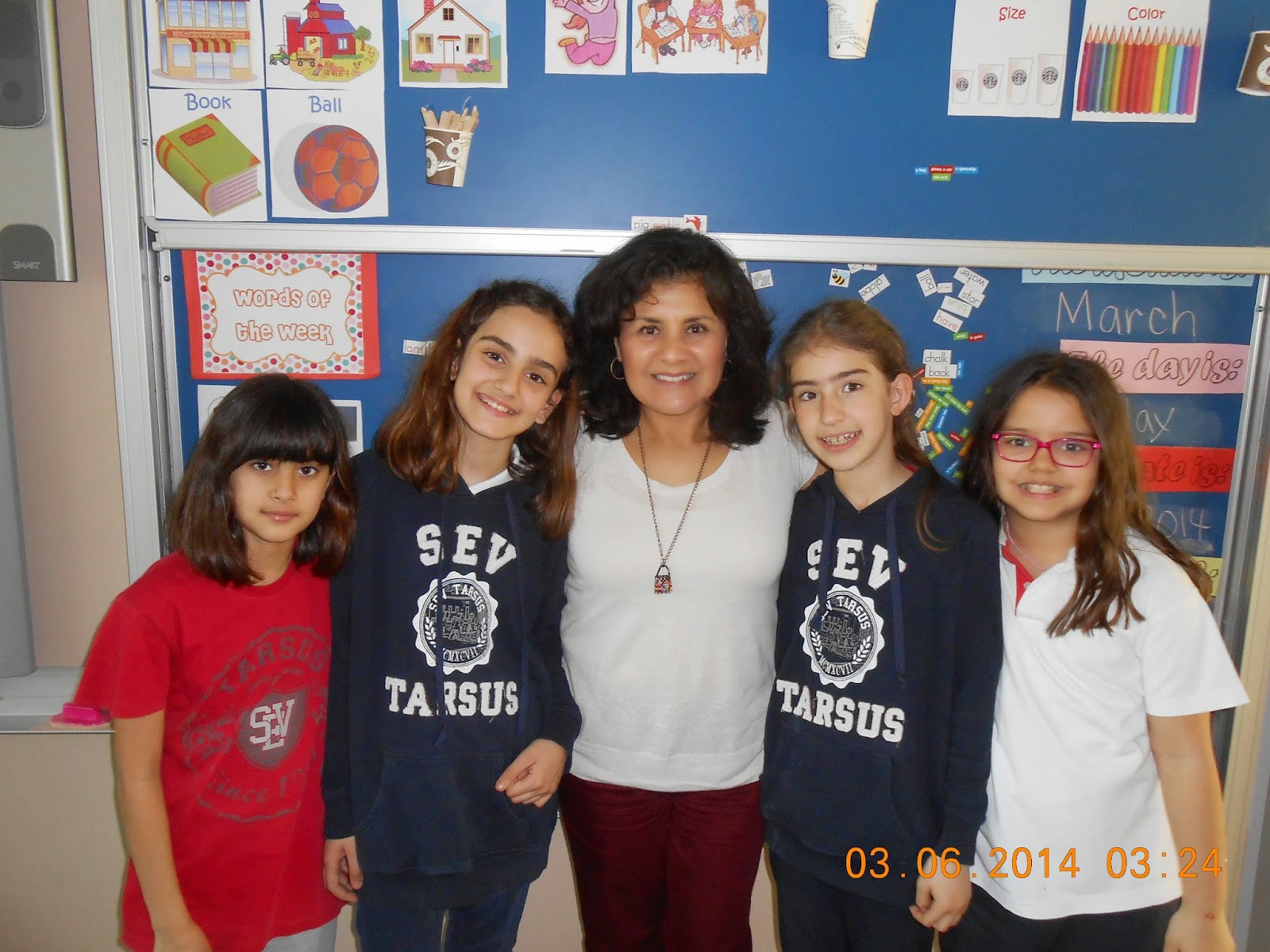 Christine with her little 4th Grade cherubs.
Ok, that's about it for now. The school year has really flown, as all school years do. We'll be home at the end of June and hope to see you then.
Much Love,
Christine and Mike